Area rapper One Be Lo talks of the crises in Egypt, his sometime home 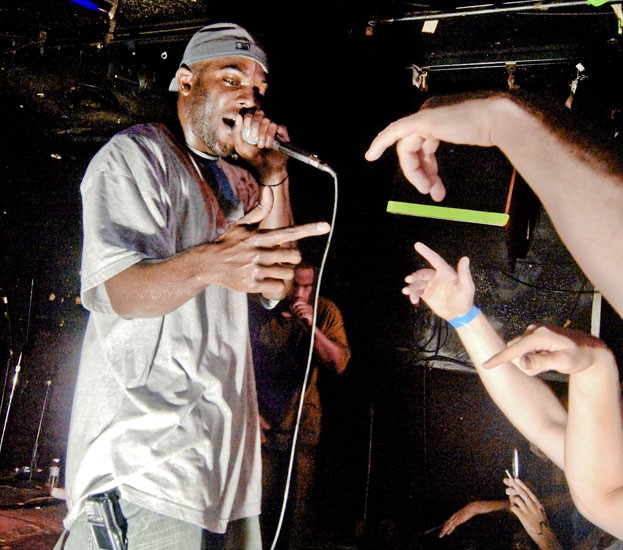 From 2007 to 2009, Pontiac native and international underground hip-hop phenom One Be Lo, and his family, called Egypt home. He and his wife and four children lived in an apartment 20 minutes from downtown Cairo. They've been living in Inkster for the last year while Lo finishes his new solo record, which he hopes to have out before spring, as well as the long-awaited follow-up to 2000's Masters of the Universe LP from duo Binary Star. Although they've played shows off and on since about '03, including a recent string in Michigan, Lo says he and Senim Silla just started laying down new material last year. Here Lo talks about his time in Egypt and the ubiquitious anti-government protests going down there now.

Metro Times: What took you to Egypt?

One Be Lo: The purpose of going was to study culture and language and study Islam from a different perspective. I travel all the time. I'm a world citizen. I kind of want that for my children. I want them to get accustomed to seeing different places and meeting different people. We plan on going back. We still have all of our furniture and stuff over there, we're just kind of here regrouping.

Lo: There's 17 million people in Cairo, so that's one difference. That was probably the biggest difference for me. Being Muslims, we're kind of already familiar with the language and the food and a lot of those things. Really it's just about getting familiar with area.

MT: When you were there, did you get the sense people were unhappy with President Hosni Mubarak and the political system?

Lo: When I travel, I don't really talk about politics, especially in the Islamic world. But you can just see it with your own eyes. It's obvious that either it's a poor country or someone isn't spending the money correctly. I remember M1 from Dead Prez, he called me when he was traveling once and said, "Man, I just went to Cairo, and I just went to Palestine, and Palestine looks better than Egypt, and that's a war-torn country!"

You're dealing with a lot of poverty, on top of just not having good education and having poor living conditions. It seems like it's just a recipe for some kind of revolution.

MT: How did you hear about the protests?

Lo: I was busy working on music, and people started texting me, "Man, I hope everything's cool with your fam." So, I just thought, "Oh, yeah, we're cool." Some people started saying, "I heard about Egypt." And I'm like, "What's going on in Egypt?"

When I start finding out stuff like that, I will go to the news, but I'd just rather call people that I know [in Egypt], and for a couple of days we couldn't even get in contact. We've still got people who are very close to us there. When we can get in contact, they tell us what they know, but they're not looking at CNN. They'll tell us, "We went to that mall and it was burned down," or, "We tried to get some money out of the bank, and we couldn't get our funds." I really don't pay attention to the news. The news has its own thing sometimes, you know?

MT: So, you try to ignore American media? What about Al Jazeera?

Lo: I'm not trying to ignore anything, I'm just going to what I consider to be reliable sources. I know so many people that have family in that area. They know from a different perspective. We all watch the news, but I just like to talk to the people who are there involved in it.

MT: Do people seem excited? Are they happy about possibly seeing this guy go?

I was trying to explain to my kids about rioting and why people do these things. I was saying sometimes when they disagree with their leader, this is how they get their attention. I'm not saying it's right, but whatever's going on there, something needs to happen, and whatever that something is, people want a change.

Lo: I just want to see people living in clean, safe, peaceful conditions. A place that's safe for children. I just hope Egypt can just improve its living conditions. That includes politics, the land and the buildings and the infrastructure and the food and the sanitation and all of that. I know Egypt gets a lot of money from the U.S., so I don't understand why there can't be better conditions.

MT: Any thoughts on what you've heard about the United States' reaction?

Lo: Do you mean politics or people?

Lo: The average person is going to work, coming home, watching TV, playing video games. They probably don't even care. But then I've got a couple of friends who are celebrating what's going on. They — I should say, "we" — know the importance of justice. I won't even say democracy, I'll just say justice and peace and security and safety, and that's important for all people, whether they live on my street or not. We can separate it into Egypt and America or whatever but people, as human beings, should work together and be concerned with what's going on with each other.