This rapper is a character. 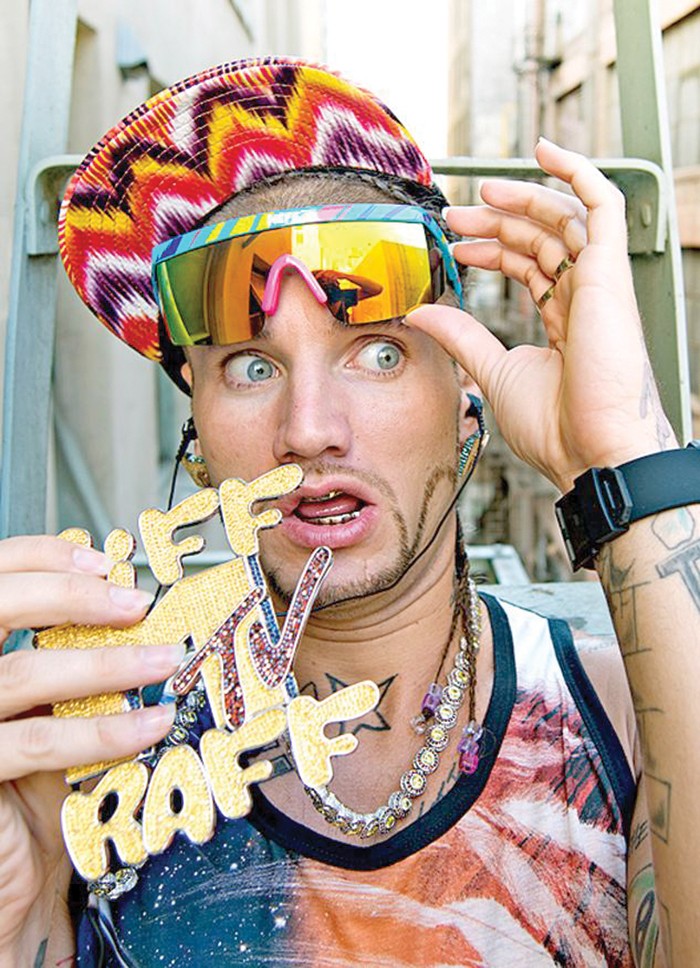 Riff Raff is a busy man. We went through four people and spent 25 minutes on hold in queue just to get him on the phone, a mark of his current popularity. Whether his hair is braided in cornrows or curled in ringlets, Riff Raff seems to be popping up everywhere. Since he appeared in the “Peppermint Tint” video in late 2012 with the ATL Twins and a hot dancing model, a blanket denial of Raff’s relevance is no longer possible.

Hilariously candid, long-haired, crass, and excitingly controversial, Raff is shooting videos, cutting tracks, filling venues and stackin’ loot. If you like nothing else about him, you can at least appreciate his audacity for having a dream and following it. The “Rap Game Teddy Ruxpin” is here to stay ‘n’ play and will be hitting Detroit during the Movement Electronic Music Festival.

“Detroit baby!” Raff says, “Man, I’m really looking forward to coming to Detroit and rocking the crowd. I can’t think of anything else I’d rather be doing. We’re gonna have a crazy great time, y’all. Also, there’s fi’in to be a VIP pre-show pizza party before every show on my tour so I can connect with fans of all ages, meet-and-greet style with puppies and shit. Then in Detroit there’s gonna be a bonus kick-ass after party for strictly hardcore partying to celebrate the end of this portion of the tour.”

Rapping since 2005, Raff signed with Swishahouse in 2011, then Souljaboy, and now after dozens of mixtapes, Raff is on Los Angeles DJ Diplo’s Mad Decent label. He has a new album, Neon Icon, in the works that will be dropping at some point, too.

“The tour never really ends. It just keeps going and going. I’m doing a world tour after summer, so shit’ll be hype. I was getting stressed awhile back over all these back-to-back shows snowballin’, but learned over the last few months you just gotta enjoy the moment to moment.”

We really wanted to know, is Riff Raff for real? Many people think the persona he has created and inhabited is one hell of a character parody, like a deep cover agent who has permanently merged with his cover identity — someone Hollywood should be hiring as a method actor.

While Raff’s true nature seems to remain a mystery, perhaps that’s what keeps people so intrigued. Raff’s sense of humor is underappreciated by anyone who takes him too seriously, “I’m just myself. I just do me. I don’t care what people fucking say, I can’t accommodate everyone. People are biased against me before even meeting me. They overanalyze me.”

With a loud persona that shines through in his (hilariously) ghetto lyrics and sound, Riff Raff’s music is as colorful as his album covers. His set at Movement will surely include lots of bling, glimpses of grill and plenty of auto-tune. And rapping. And computer noises.

Raff is staying focused on the music and touring and will be landing in Hart Plaza soon, “Hey, fun fact, I don’t have a wife and kids. That says a lot. Riff Raff just wants to have fun right now.”