‘This was the action of a Third World dictator’ 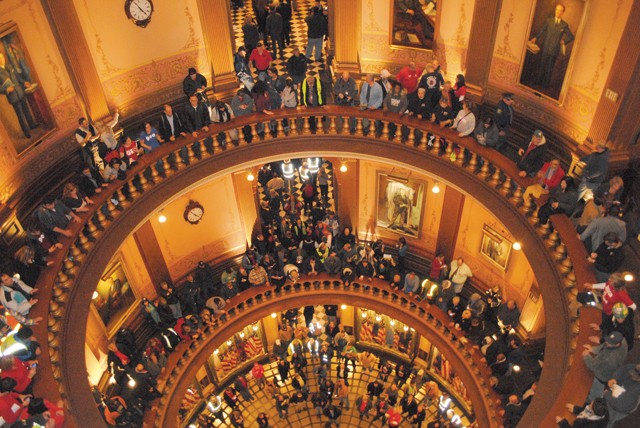 After years studying the oppressive regimes of Eastern Europe, I knew exactly what to call what happened with "Right to Work" in Lansing last week: fascism with a human face.

Or, perhaps, tyranny without a tie. The way legislation was rammed through in a single day would have been admired by all of those puppet regimes that used to do Hitler's and Stalin's bidding. (Democracy? Fuck that.)

"We have had more deliberative hearings on something like a new commemorative license plate," state Sen. Steve Bieda (D-Warren) told me. Bieda, one of the state's most thoughtful and creative legislators, added, "As much as I detest the legislation, what's worse is the way they did it."

"This was the action of a Third World dictator," he said. "The governor went back on his word — this governor who was posing as a moderate. This was really a right-wing power grab."

Well, yes it was. They didn't even bother with the veil. Shortly before lunch on Thursday, the governor, who had long said abolishing the union shop wasn't on his agenda, did a complete about-face, proclaiming not only did he want it ...

But that the time to do it was now. Within hours, both houses had passed bills blowing apart the long-established labor-management relationship as we've known it.

What Right to Work means is the essential death of the power of unions, in any real sense. In case you aren't too sure of the principles involved here: Unions have been able to get what clout they've had by getting workers in an industry or a plant to establish what is called a "union shop."

When you went to work there, you either had a choice of joining the union or, if you didn't want to do that, you at least had to pay them dues, and agree to accept them as the group who negotiated your contracts with management.

Right-wingers say union shops are an outrageous slap at freedom, and that workers should be free to work wherever they want without having to join anything they don't want to.

Likewise, they say management should have the right to negotiate whatever terms they like with free workers on an individual basis, rather than with some socialistic "union" that insists all workers be treated exactly the same.

All that makes perfect sense ... if you are some affluent guy without much of a sense of history, sitting in your parents' vacation home, reading Ayn Rand.

But the fact of the matter is this: The unions are what made it possible for ordinary workers to have vacations and health care and a decent living. "Prior to the unions, working people didn't have any such thing as a vacation," former Michigan Attorney General Frank Kelley told me last week.

Kelley, who is almost 88 but still is as sharp as most 50-year-olds, grew up in a world before unions.

"People didn't have weekends. They didn't have health care, for Christ's sake. The unions made that possible. The unions in this country created the middle class. This is the worst day in my life," Kelley said, shaking his head.

Believe me, the corporations know that too. Once the union shop is abolished, employers can speedily undermine unions by hiring non-union workers. They may pay them a little more, or make them think they are getting something special.

Eventually, the union will have lost much of its clout and have no real power to negotiate hard for better conditions or to call a strike. Management will just blissfully fill the ranks with scabs.

They found no evidence to support the idea that right-to-work states attract more jobs. They did find considerable evidence that wages are lower in such states.

"Unless and until this is repealed, Michigan will never again be a major industrial state," Frank Kelley thundered at me. But is there any chance of stopping or repealing it?

Not anytime soon, seemingly. The reason they rushed it through with such unseemly haste is that Snyder and his legislative henchmen knew they couldn't do it in January.

Democrats will still be in a minority, but they gained five seats. RTW only passed the state House of Representatives 58-52. Even six Republicans voted against it. Had four more votes switched, it would have failed. Some of the Republicans voting to stick it to the workers were lame ducks who aren't coming back, and so didn't have to fear the wrath of their voters.

If you need further proof that the Republicans hate democracy, they deliberately attached an appropriations rider to the bill. When they do that, it means voters can't collect signatures to try to get repeal of this law on the ballot.

The special interests gave very specific instructions to their puppets in the Legislature, and they followed through.

But something good may, just may, come out of this:

Let's face it: The right wing was able to do this because labor has been slipping for years, and there hasn't been a labor leader worthy of the name for a long, long time.

The bottom line, and labor's dirty little secret, is this: There isn't any "labor movement." To some extent, there may not have been one since the old IWW, the Industrial Workers of the World, ceased to become a major player.

Walter Reuther did, indeed, want to move on from organizing just autoworkers to doing something for and about other workers and the oppressed of our society. But today's "labor movement" is a bunch of sometimes-squabbling unions, each concerned with protecting the special interests of a small, specific and usually declining group of specialized workers.

Today, barely 12 percent of Michigan workers in the private sector are covered by labor contracts. Even when government workers and teachers are added, less than one out of every five Michigan workers is unionized.

Does anyone think making this a right-to-work state would be possible if even half our workers were in unions?

Worse, many unions in recent years have caved in docilely to management demands. The UAW in particular agreed, as part of the bailout package, that most new autoworkers could be paid only slightly less than half what longtimers make. Imagine you are on the line today.

You are only making about $29,000 a year. Realistically, you can't buy a home and start a family; you can't even afford a new car. How grateful are you going to be to the union that got you that wonderful contract?

Bet we can guess. To be fair, unions have a harder task in many respects than in 1937. How do you reach the knowledge worker banging the keyboard in her lonely apartment as an independent contractor? How do you organize new immigrants who can't speak English and are scared of getting in trouble?

One thing is for sure: Organized labor has to do something to revitalize and reinvent itself, pretty fast.

Otherwise, unions may be headed for irrelevancy and then extinction, in this state, at any rate. They've taken a major blow, and they need a shot of leadership and inspiration.

So ... anybody have any ideas?