R.I.P., Lottie the Body, the Detroit burlesque bombshell who danced across racial lines 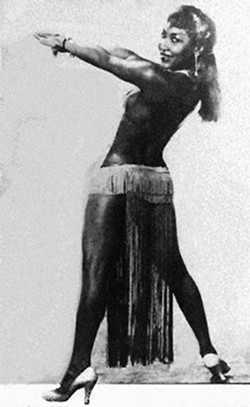 Burlesque star Lottie Graves-Claiborne, better known as "Lottie the Body," recently died in Detroit on Feb. 29 at the age of 90.

Not only was she known for her mesmerizing burlesque, she was also known for fearlessly crossing racial lines at a time when Black people were denied access to the spaces around them, and entertainers of color were told to enter venues through the back door. Her popularity granted her access to perform throughout Detroit and across the United States. She accompanied stars like Billie Holiday, Josephine Baker, Sammy Davis Jr., Redd Foxx, and other notables onstage, and her brand of sensuality took her to Michigan nightclubs like the 20 Grand, the Brass Rail, and a Las Vegas-style show in Idlewild, Michigan, which was known as the "Black Eden."

Claiborne didn't set out to be a race agitator, she reflected in her memoir for Coastal Connecticut magazine in 2014. "I lived my own sort of civil rights movement, making friends and connections in my own way wherever I went," she said.

During an interview with Janice Milhem for a Documenting Detroit photo series The Wisest Generation, Claiborne recalled a story of attending a Chinese restaurant next-door to the Brass Rail. When the waiter refused to serve her, Ivan Boesky, the son of the Brass Rail's owner, spoke to the maître d'. "This is our star," he said. "If you can't serve her, you can't serve [anybody]." A month later, the restaurant opened its doors to all people.

Growing up in New York, Claiborne was trained as a classical dancer. Her parents' home was listed in the "green book" for Black musicians and performers who couldn't stay in hotels due to segregation in the 1940s. Claiborne's early exposure to these artists influenced her decision to pursue entertainment. She danced with Alan White's troupe from Harlem, traveling the world and also working as a model. When she posed for a student sculptor, he named his artwork "Lottie the Body."

This label defined Lottie's status as a sex symbol, which was birthed on the cusp of the '60s sexual revolution. After the dance troupe dissolved, Claiborne was forced to find a way to continue making money, and burlesque was the obvious choice for her. She began studying with accomplished choreographer Katherine Dunham, who worked with the likes of Eartha Kitt, and taught Lottie versatile dance styles from Africa, Latin America, and the Caribbean. According to local lore, Motown house band the Funk Brothers secretly broke their exclusive contract by performing as Lottie the Body's backing band, where they picked up on Afro-Cuban beats, bringing them back to the Motown studios where they worked their way into songs.

"It's the training that created the je ne sais quoi for her to be the muse to the Funk Brothers, it was the Dunham training that put the music in her bones," says neo-burlesque entertainer Chicava HoneyChild, a scholar and documentary producer for Black Burlesque, an in-progress film. She considers Lottie the Body to be her burlesque godmother.

As Claiborne's fame grew, she left a lasting impression on those she encountered. Rodger Penzabene Jr., a collector of burlesque memorabilia and current owner and president of the resurrected jazz brand WJZZ, recalls that his grandmother was friends with Claiborne. He remembers Claiborne as a classy and beautiful African-American woman. "Lottie was very marketable," Penzabene says. "She performed all over the state, and in Paris, she received the same pay and treatment as white burlesque performers."

Bert Dearing, the longtime nightclub entrepreneur and 31-year restaurant veteran who owns Bert's Warehouse, was a special friend of Claiborne's. Dearing has Lottie the Body's image displayed alongside other local notable figures as part of a mural on the wall of his building.

"For Lottie to be so successful back in the '50s and continue all the way into the '80s and '90s, she had to be something special," he says. He describes her as a natural onstage. "When she danced, it was just a flow. She was more than just a dancer — she expressed her feelings in her dancing."

Performer Lottie Ellington paid tribute to burlesque greats Lottie the Body and Toni Elling by combining their names to make her own stage name. During Ellington's conversation with Lottie, she told the star how much she was an influence and admired her. When she asked Claiborne for permission to continue using her name, she thanked her and said she was honored that she knew about her.

Claiborne lived her life to the fullest, and her craft propelled her to places she would never dream of. "If I were to give advice to a young woman today, it would be to live your dreams just like I did," she told Coastal Connecticut magazine. "Just remember me, Lottie the Body. If I could do it, you can, too."