Rise of the Guardians

Saving innocence — Justice doers do it for the kids 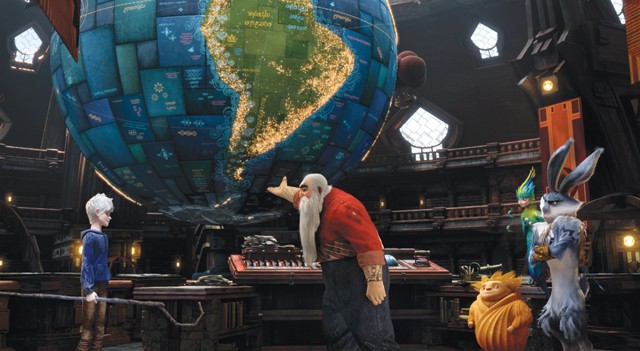 Rise of the Guardians | C+

In this colorful, hyper-caffeinated Dreamworks animated offering, the most beloved icons of childhood bedtime stories are assembled Avengers-style, into a supernatural squad of justice-doers, bound and determined to protect the fantasy worlds of children, while offering up a recognizable adventure that leaves little to the imagination.

Long-serving stalwarts North (Alec Baldwin), Tooth (Isla Fisher), Bunnymund (Hugh Jackman) and silent partner Sandy, are joined by cheeky young upstart Jack Frost (Chris Pine), who is enjoying the heck out of his new freezing skills, though he's hazy on how he got them. Also hazy is why everyone seems to be very familiar with the idea of Jack Frost but he's somehow a rookie and never been a member of the team. Similarly murky are the motivations of the seductively sinister Pitch Black (Jude Law), who is a living shadow, or the boogey man or something; suffice it to say he's the bad guy, out to ruin everyone's holiday cheer. The good guys are powered by kids' belief in them, so Pitch's grand scheme is to ruin Easter, which probably wouldn't bother the legions of non-Christian children, but the Guardians don't seem to give a hoot about them.

The numerous action scenes zip by in a dizzying sugar rush, but the charms of the voice actors break through the mayhem. As a Russian bear of a Santa Claus, Alec Baldwin is having a lark belting out exclamations like "Shastakovich!" And Hugh Jackman's Aussie tough guy Easter Bunny is weirdly appealing.

From its generic title to its forced holiday merriment, to its cuddly, plush toy-ready sidekicks to its frenetic video game level design, Rise of the Guardians reeks of a scenario where marketing strategy leapfrogged movie-making creativity. It is indeed cynically calibrated to tug at the heartstrings and dazzle the eyeballs, all while extolling the virtues of childhood innocence and simple belief in something magical. As its cleverly rendered fairy tale heroes whiz past, it's hard not to feel manipulated, but it's not too difficult to enjoy the ride. mt