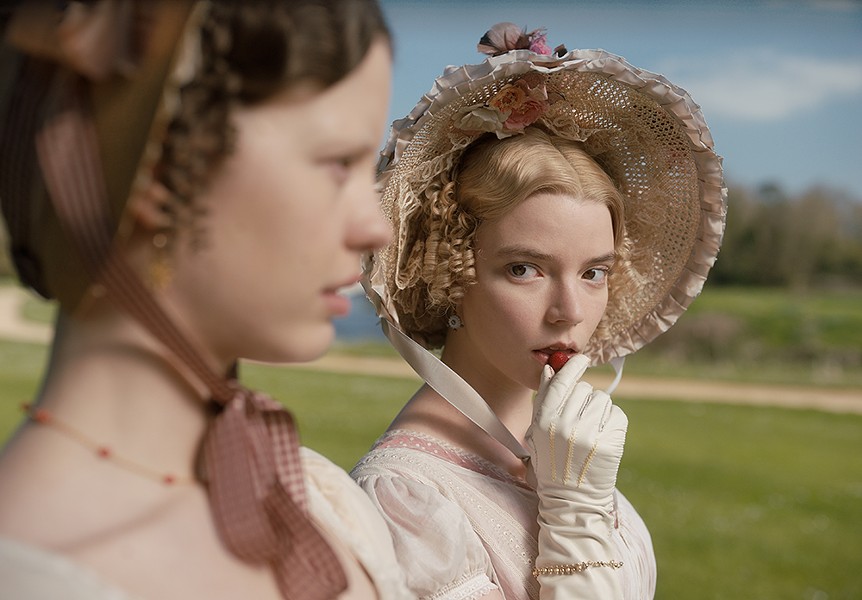 Oh, before smartphones and Instagram, there were influencers ... and they could be as shallow, as overconfident, and as pejorative as they are today. This new adaptation of Jane Austen's Emma — the feature debuts of photographer and music-video director Autumn de Wilde and Man Booker Prize-winning novelist turned screenwriter Eleanor Catton — brings that sort of modern frisson, of the oppression of performative perfection against a marzipan backdrop, to its retelling of the tale of a very rich young woman who amuses herself by interfering in the romantic lives of those around her. She may be hoping to inspire her friends, but more often than not, she's a conceited bully trying to mold them in her own image, even if that doesn't suit them.

The notoriously — ahem — clueless privilege of Emma Woodhouse is delivered with just the tiniest hint of terror in the hands of Anya Taylor-Joy — an inspired bit of casting on de Wilde's part — who inevitably brings a shiver of unease with her from the horror movies she has been heretofore known for. Her Emma is a queen bee with more sting than previous depictions of the character have had: Taylor-Joy's preternaturally large eyes seem to bore straight through those she would dominate.

Such as Emma's friend Harriet Smith, whose low birth makes the poor, unlineaged girl much more suited, in oh-so class-conscious Regency England, to the handsome farmer Robert Martin (Connor Swindells) she really likes rather than the absolutely unctuous yet more "respectable" vicar, Mr. Elton (an unexpected Josh O'Connor), to whom Emma is attempting to marry Harriet off. Mia Goth, as Harriet, also hails from horror films, and her Harriet isn't merely timid in the face of Emma; she's downright petrified, a pale, watery figure who might only be retaining any solidity at all through her devotion to Emma and her desire to please her "better," who can surely have only Harriet's best interests at heart, no?

A recurring visual motif of schoolgirls in bloodred cloaks fluttering through Emma's village of Highbury is a vivid splash of color amongst the soft hues that fill the movie's palette, and made me think of The Handmaid's Tale. It's another hint of the muted horror underlying Emma's insistence — which is her world's insistence — on women's highest achievement being marriage and babymaking. It renders Emma's infamous moment of outright cruelty, to Miss Bates, the older spinster in Emma's circle, seem even more brutal: does Emma have no consideration at all for a woman who has failed at the one job she is "supposed" to do? (Miranda Hart plays Miss Bates as slightly ridiculous and totally harmless, and perhaps even less worthy of Emma's disdain than other versions of the character have been.)

There's real bite, too, in Johnny Flynn's Mr. Knightley, the family friend who acts — though clearly he would prefer not to — as Emma's conscience, especially in that scene in which he calls Emma out for her behavior toward Miss Bates and Emma finally begins to realize how wrong she is about almost everything. It had never occurred to me before — and maybe this is a function of the extra sharpness of this new adaptation — but how rare it is to see a young woman onscreen learn a life lesson with such a searing onset of painful self-awareness.

For sure, there is much light entertainment to be had here: in Bill Nighy being Mr. Woodhouse as Emma's widower father, and in Gemma Whelan and Rupert Graves as the happy newlywed Westons; in the literally, er, cheekiness of a few reminders that these are fleshly human beings, not costume-drama mannequins. But Austen's wisdom about men and women and life and love takes on a sly, penetrating zing that underscores that the comedy of manners that might seem like fluff and nonsense was — and remains — deadly serious, too. When I say that this new Emma nails what Austen was saying ... well, it really nails it.