The Questions aren't afraid to kick out the political jams, in classic MC5 style 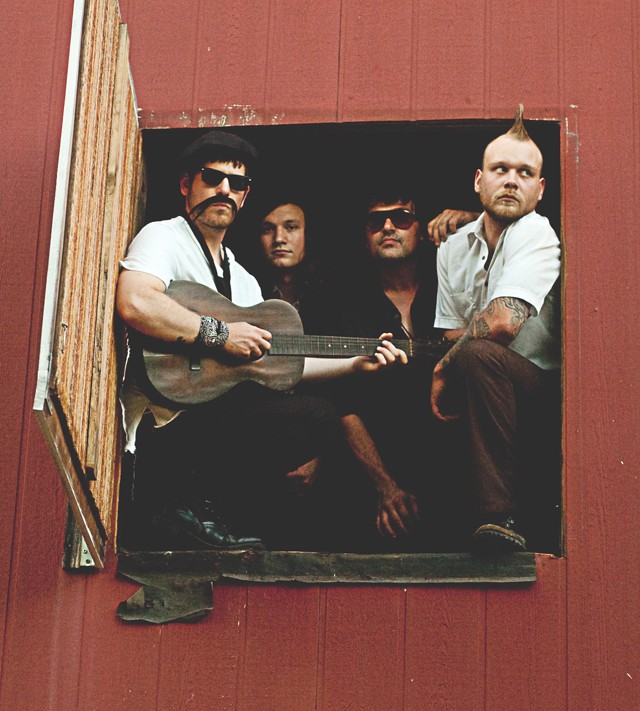 It doesn't take much to get Drew Bardo talking. Sitting outside of Midtown's Garden Bowl on a nippy Monday evening with his bandmate Chris Krzeczkowski, the strong-voiced writer-musician pulls from a beer, talking of ham-headed politicos.

These guys are all grins — on the outside. But on the inside they're fuming about the political landscape, the fabric of our society and the massive hypocrisies of our government. As reflected in this genre-trashing rock quartet's moniker, they ask questions.

They can go on for hours about ideas and politics, sorta like how Wayne Kramer used to, and be persuasive. They're full of conviction, with no irony. Like 'em or not, it's damn nice to see and hear passion for and about something.

It's that conviction that led the Questions to help organize a "Peace in the Middle East" rally, a free, all-ages concert happening this week in Detroit. The show will feature a host of bands, including Hi-Speed Dubbing, Darkred, Jehovah's Witness Protection Program and the Electric Lion Sound Wave Experiment. The rather altruistic purpose is to, they say, assemble Detroit's artistic community and find ways to enact change within the city and abroad. Sound like broad strokes, if not a bit nave, the overly earnest political ramblings of a try-too-hard artist? Hardly.

Bardo says it's "not a political mission, it's a humanitarian [one]" designed for people to make their own choices and "do their own thing."

The biggest theme of the rally (Bardo calls it a "rock 'n' roll town-hall meeting") is for those involved to voice opposition to the current state of affairs as dictated by U.S. foreign policy, the multiple conflicts our nation is fighting, and the hypocrisy that these artists sense surrounds those actions.

It's also a statement about the fate of the troops that have shipped out over the years to fight in these wars.

"It's no coincidence that we're doing this on Memorial Day weekend," Bardo says. "It's not to say we're anti-soldier or anti-military. It's saying: 'Why are they dying for this corporate agenda when the reality is that the new world order is spreading and they're trying to topple all the people who aren't playing ball?'"

This rally is but an outgrowth of ideas Bardo and the Questions have had brewing for years.

The Questions formed around 2004, sprouting from Bardo's literary and poetry endeavors. He grew up in Milford, is writer at heart — says he grew up on Poe and is a fan of Rimbaud and Baudelaire — his latest book of poems, The Naked Myopia and Other Poems was released locally this past year.

The band formed to fuse rock and spoken word, and to better communicate the ideas inside Bardo's head. Various lineups ensued before the 32-year-old Bardo met a kindred spirit in guitarist-trumpeter Krzeczkowski, 28. The group found stability with bassist James "Pookie" Grech, 33, and drummer William Linna, 27, and they've been relentlessly gigging, sharpening their collective vision.

The sound is difficult to nail down. They're a rock 'n' roll band at heart but they'll kick boundaries down with jazz-tinged psych and grit-toothed country. Bardo explains: "One of the first things I told Chris when we got together was, 'Listen, the only rule for this project is that there are no rules.'"

Their individual (musical) sensibilities run the gamut, although there's common ground. All four love classic rock and punk. Both Bardo and Krzeczkowski dig jazz; before joining, Krzeczkowski got into Wayne State University on a full scholarship to study jazz trumpet. The band lists everything from Elvis to Nirvana to What's Going On as reference points.

The Questions are just now finishing their second album, tentatively titled Chasing the Light, which you can hear some of at Bandcamp. The songs offer a clear glimpse of just how varied the band can be: "Lorna Blue" is an Americana-hued pop tune while "Chasing the Ghost" is a cool, bluesy dirge replete with biting spoken word (with material taken from Bardo's aforementioned book) and Krzeczkowski's hefty trumpet.

"Trying to describe the album is like asking someone to bottle the ocean," Bardo says, laughing. "It's impossible. It's free-flowing and takes on a life of its own. We all believe that it's truly beyond us and not necessarily our baby or our creation. It's the sounds of humanity; it's the sounds of life itself translated through our antennas." They hope to have the album out by summer.

The indie reality is that everything's self-propelled, self-funded. Money for artists rises from within, or from pals and fans via Kickstarter, and profit is a foreign concept. The Questions are complete DIY, and although the band has conversed with labels in the past, there's no corporate pressure here. "These songs are really eclectic and I think us doing it on our own allowed us the freedom of creativity to make something like this," Krzeczkowski says. "If we had people telling us what do and pushing us around, some of that would have gotten lost."

Bardo and Krzeczkowski have pretty perceptive and open-mined world views, results of interesting lives lived thus far. Krzeczkowski's old man was a tenor opera singer and, as a result, he traveled widely, from Austria to Italy. The chance to peer into different cultures had a deep effect on Krzeczkowski's perception of the world around him. "Being abroad really inspires you to understand the world as a whole," the horn-playing guitarist says. "It's not about religion or race or any of that. All those lines that are drawn between countries and cities don't really mean anything because everyone is trying to attain the same thing, the same happiness."

Bardo's worldview really began forming in 1996 after he enlisted in the Army. It was his first real taste of the world. He was disillusioned by what he saw — armed forces rich with false advertising and hypocrisy. It gave him a need to peer behind it all. He soon figured it was his "duty to expose the hidden truths."

It's interesting (maybe a bit refreshing) to see a band so political be so outspoken, like the Clash on Sandinista. Today too many artists shirk political opinion, and career emphasis is about celebrity and narcissism.

"A lot of people don't want to get involved in politics when it comes to art," Bardo says. "They're afraid to stand for something. Well, I'm sorry. I can't just sit around and allow these criminals and these dark spirits to just destroy civilization and not do anything about it."

Bardo's keen about championing the underdog, giving voice to the voiceless. That's what this rally is about and, ultimately, he says, what the Questions are about.

Is he afraid of being accused of martyrdom, or wielding a large ego?

Not at all, he says. "Once somebody asked me: Are you the light bulb or the energy the lights the light bulb? I'd like to think of myself more as the energy that lights the light bulb. We're all part of the same tapestry of consciousness. We all exist as a part of the light, as a part of this subterranean river of energy that exists in everything that is alive. And there's just this small percentage of people that just don't want to live in the light. It's not that one person necessarily changes anything. But if that one person inspires 10 people who inspire 10 people, all of a sudden, things gain momentum. Then the uprising happens. And we're all about the uprising."