These dudes may not be svelte and sexy, but they won’t be put out to pasture 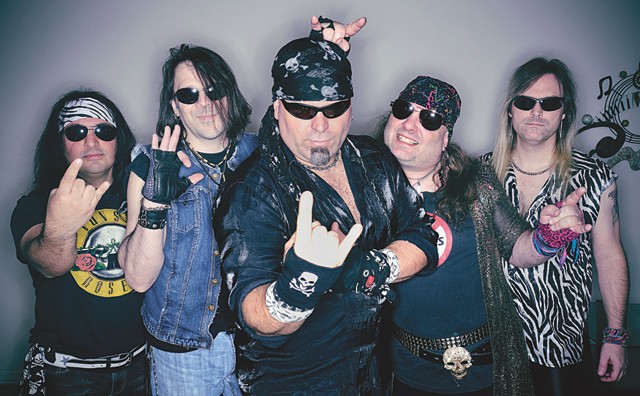 Sometimes I come across a story so ludicrous and funny that it'd be criminal not to write it. And so it was about three years ago I was in Garden City at some godforsaken bar meeting a group of my now-wife's old school friends. The room was full-to-heaving, and most were staggering around, serving as the perfect argument in favor of 12-steppin' outta there. The stench of vomit, sweat and cheap perfume-cologne hung in the place like a successful suicide, and everybody was making a move on everybody else.

Conversation with said friends was limited to the smallest of small talk, and the evening was shaping up to a dead loss. And then the band started, and everything was OK. The stench could be ignored, the obnoxious drunks were "dancing" and, therefore, nowhere near me, and the nonsensical small talk was forgotten. That is the power of RockStar.

RockStar (all one word, ya see) are five middle-aged dudes with discernible bellies who squeeze into their old leather trousers — sometimes a wig's slapped over thinning hair — and get up on stage night after night in similarly excruciating venues around Michigan and play a set of '80s hair metal classics. Crowds go wild.

It turns out there are a shitload of cover bands in Detroit, but RockStar is the first I've heard of whose focus is the era of dudes with blond poodle 'dos and Reaganomics. Most go for the rock standards that currently infect the radio (such monstrosities as Godsmack, Disturbed and Nickelback). RockStar takes us back to a time when rock 'n' roll was dumb and, for many, fun. And they're proud of it. So expect to hear Ratt's "Round and Round," Poison's "Talk Dirty to Me," the Scorpions' "Rock Me Like a Hurricane" and any number of classic tunes by Motley Crüe, Bon Jovi, Guns N' Roses, Skid Row, etc, etc.

Many will read this and wince. Many will think Nirvana killed that shit off in the early '90s, and that's truth. This music had little depth, and the bombastic image was never built to last. However, the snobbiest of music snobs must admit that those tranny-looking motherfuckers could write a sing-along, and they appeared to know how to have a good time.

So that's what RockStar do — they haul those days from the scrap heap of cultural discomfiture and slam them back into modern-day Michigan bar rooms. Kinda. These guys will be the first to admit that they can't pass anymore for pouty, sexually ambiguous boys in kohl and lip gloss. But I've seen the band twice. In Garden City, they were magnificent. In Madison Heights, abysmal (although, to be fair, they were missing a guitarist that night).

The band is singer Kelley Huff, guitarist Jumbo Sunshade, drummer Dan Chapa, bassist James Glenn and rhythm guitarist-keyboardist Michael Lafferty. They came together when, having all fallen into regular day jobs, they realized that wanted to get on stage and rock like they had done when they were reckless kids. "As we were putting the whole project together, we realized that there were some acts in the metro area that were paying homage to the '80s era of music but none of them were based solely in the hair band style and we felt that it was a perfect time for us to come out with that type of an act," Lafferty says.

"So, what started as just a way to get together and enjoy each other's company turned into a real production. We rehearsed and started playing shows in the summer of 2002 and we have been going ever since."

"It's only dead if you don't listen to it any longer," he says. "The people in our age range grew up with this music the same way we did and they love to hear these songs. But it's not limited just to the people in our age range — even though that is our key demographic. We just did a show a few weeks back for the city of Warren's Birthday Bash and there were a ton of kids there and they knew a lot of the songs we played and sang along. Could an original hair band make it today? I don't know. Steel Panther seems to be doing alright."

The RockStar guys appreciate the silliness of their work and they appreciate their sometimes huge draw. "We have played some really great shows so it's hard to name just one," Lafferty says. "There is an annual festival in Frankenmuth that we have played a few times called 'Bringing Back the '80s' that were always great shows. We did the 2010 show and it was filled between 3,000 and 4,000 people. We have been invited back for the 2012 show in April, and there are more people expected to attend this year."

Do the big-haired chicks on hooker heels show up like in the glory days?

"Groupies in the traditional sense of the word, no," Lafferty says. "But, we've all have had some fun things happen in the way of female attention. We played a gig in the Port Huron area, and when the show was done, this girl jumped up on stage and in front of the whole audience had us sign her ass with a Sharpie marker. There was another time we were playing a venue and this woman rushed up to the stage and flashed us. The stage lights were out so we yelled to our light man, 'Turn on the lights! Turn on the lights!' He did and we yelled, 'Turn them off! Turn them off!'"

RockStar seems to have found an audience among the drunken buffoons in backwater bars, but occasionally gets to support its heroes too.

"We have opened for several original hair bands including Warrant, Brett Michaels, Faster Pussycat, etc.," Lafferty said. "We have done these gigs at Harpo's and the Hayloft. We've even opened for arena rock bands such as REO Speedwagon, 38 Special, and others. We opened for Loverboy and Foreigner at Freedom Hill back in 2009. We were supposed to open for the original Quiet Riot at the Machine Shop and they broke up that morning. We got a call from the Machine Shop and were asked to take their place instead of just being the opener so that was flattering. We played some Quiet Riot songs for the crowd that showed up. Most recently we played with the Tubes at the Warren City Birthday Bash celebration. We also have a great working relationship with WRIF. They have been very good to us over the years and have had us headline some of their shows such as Harley Fest and Rocktoberfest."

So that's RockStar. The ugliest of pretty boys, playing up tired clichés in bars that hipsters wouldn't be seen dead in. But the houses are packed and everybody staggers home with plastered-on grins, make-up smudged to buggery.

What could be more rock 'n' roll than that?