RTA's bylaws show a clear bias toward bus over rail

Throwing rail under the bus. 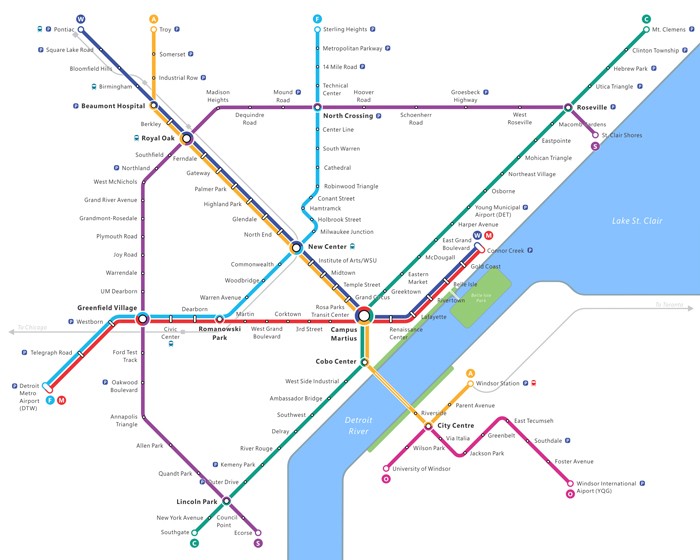 The legislation creating the Southeast Michigan Regional Transit Authority (RTA) was created to represent Wayne, Oakland, Macomb and Washtenaw counties. Under the bill, the 10-member board representing the RTA would be tasked to oversee current transit operators across the four counties and develop a proposed 110-mile bus rapid transit (BRT) system.

But a distinction in the authority’s bylaws was raised by proponents of rail transit before the state legislature ever gave the bill final approval.

The RTA’s bylaws show a clear distinction, and, some say, preference to bus options over rail. The authority’s board needs a supermajority to ask voters to approve a tax that would fund future operations and capital costs for the BRT system.

But to construct or operate a rail line, such as the proposed M-1 streetcar line in downtown Detroit, which officials hope to eventually turn over to the RTA, the board requires a unanimous vote.

Carmine Palombo, the director of transportation planning for the Southeast Michigan Council of Governments, says the concern of those crafting the bill was the upfront capital costs.

“I think the idea … is to protect the RTA and protect everybody in terms of making sure if you’re going to incorporate rail that there’s a plan in place so that it’s funded appropriately; so that there isn’t any significant … amount of debt that comes along with it,” Palombo says.

Considering that bus rapid transit — the mode the RTA is essentially tasked with constructing — is less expensive to construct than light rail, Palombo says legislators appear to have been saying, it’s not, “we’re never going to have rail, but it’s an [admission] that rail is expensive. If we’re going to do it let’s make sure everybody’s on board.”

Conan Smith, executive director of the Michigan Suburbs Alliance, agrees — to an extent.

“Rail projects in particular are very capital-intensive on the front end,” says Smith, who played a role in writing the RTA legislation. But “[rail] ends up comparing costwise pretty well with bus rapid transit.”

Smith says concerns centered on, “If we want to do rail … let’s just make sure that this board is fully behind it.”

Smith points out that the Southeast Michigan Council of Governments several years back determined commuter rail to be the ideal mode of transit to connect Ann Arbor with Detroit. Under the RTA legislation, the goal is to connect the cities using BRT.

Smith says there was pushback from Washtenaw County representatives of the board who feel rail is imperative to public transit efforts. “I think we got some good support from Wayne County, as well,” he says. “… It was not like a cut-and-dry system; we definitely talked it through.”

John Norquist, president and CEO of the Congress for New Urbanism, a nonprofit that promotes mixed-use, walkable neighborhood development, says “the idea that rail is bad is ridiculous.”

A representative of Washtenaw County of the RTA, Gerber says the rail distinction has made it “very difficult” for transit advocates in her county to see the benefits of the authority to Ann Arbor.

“Bus Rapid Transit to Ann Arbor and Ypsilanti, from Detroit … does not make a lot of sense,” she says. “It’s not fast enough, and a lot of folks, particularly the mayor of Ann Arbor, has advocated very strongly for commuter rail between Ann Arbor and Detroit. with a stop at the airport.”

Sponsors of the RTA bill, including state Rep. Tom Casperson, a Republican from Escanaba, and Bert Johnson, a Democrat from Detroit, did not return requests for comment on the reasoning for the rail distinction.

Scott Wagner, an assistant manager for rail technology with the Southeast Michigan Transportation Authority in the 1970s, says it’s “ridiculous” the RTA requires unanimous approval for a rail project, even if capital costs are higher.

“I mean, [bus and rail] are both transportation,” he says. “Because it’s rail, it’s gotta be unanimous?”

Wagner helped craft a regional public transit plan in the 1970s on the heels of a $600 million pledge for such projects by President Gerald Ford. The plan included a subway running along Woodward Avenue from downtown Detroit to Oakland County, but eventually derailed due to regional conflict.

“Why don’t we get into the 21st century?” Wagner says. “We are so backwards when it comes to mass transit in this region.”

BACK TO THE DRAWING BOARD

A number of proposals to regionalize metro Detroit public transit options unraveled due to, among other things, funding and governance of issues. Here are some examples of previous failures that required officials to head back to the drawing board:

• 1902 — Citing a lack of public need and interest, Detroit Mayor William Maybury shoots down a proposed subway system. “I cannot understand what it could be used for,” Maybury told the Detroit Free Press at the time.

• 1933 — Detroit voters OK a subway plan, but the proposal fails at the state level.

• 1967 — The state legislature creates the Southeast Michigan Transportation Authority (SEMTA) to oversee mass transit services across seven counties. The legislation did not enable the authority to levy taxes to generate a dedicated revenue stream, so the authority, eventually, fell apart.

• 1976 — President Gerald Ford pledges $600 million (nearly $2.5 billion in today’s dollars) for public transit. Due to the inability of the region to coordinate services, the plan would derail.

• 1985 — AMTRAK says it would construct a commuter rail line that runs between Joe Louis Arena and Ann Arbor with 11 daily routes. Local matching funds were never identified so the project was scrapped.

• 1994 — The Suburban Mobility Authority for Regional Transportation and the Detroit Department of Transportation attempt to merge operations, but the plan falls apart due to differences of priorities.

• 2002 — Legislation to create the Detroit Area Regional Transportation Authority is vetoed by Gov. John Engler on his way out the door. The legislation would’ve required leaders to find efficiencies in modernizing suburban and city operations.

• 2012 — The state legislature approves a bill creating the Southeast Michigan Regional Transportation Authority with $500,000 in startup costs. The minimal level of funding has hurt the authority’s ability to move forward with its outlined agenda.