A self-reflexive and ironic trip down 'no reason' road 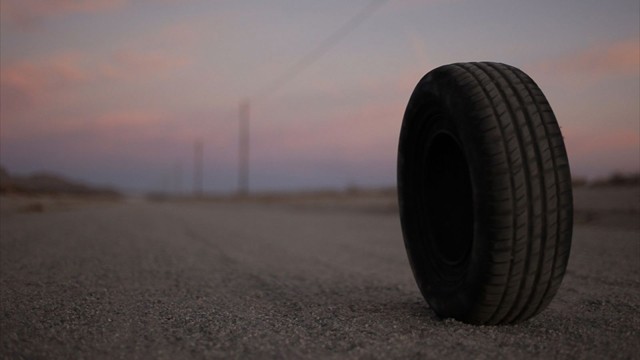 A killer tire with the ability to psychically explode its victim's heads? Sure, why not? In for a meta-dime, in for a meta-dollar.

Rubber is silly, self-reflexive, and oh-so arch. And for its first 40 minutes or so, it kind of sort of works (as much as a film about a murderous steel-belted radial can), establishing itself as a smart-ass modernist comment on popular cinema. After all, its very concept is a statement unto itself. If we can have killer gelatin in The Blob or haunted videotapes in The Ring, why not a murderous spare tire?

Described as an homage to a long list of "no reason" genre films by his movie-within-a-movie police lieutenant (Stephen Spinella), writer-editor-director Quentin Dupieux's low-budget horror comedy has more potential than ideas, never meeting the high expectations of its brazenly absurd concept nor delivering enough camp to establish itself as this milliennium's version of Attack of the Killer Tomatoes.

Shot in Joshua Tree National Park, Rubber is the tale of Robert, an abandoned tire that not only comes to life but discovers that it has telepathic abilities straight out of Scanners. First exploding small desert creatures then moving onto human beings, Robert indulges in a campaign of bloody mayhem before developing a fixation on an attractive young girl.

But this is only half the story. Dupieux also introduces us to the film's "audience," people who have come to the desert to witness Robert's head-exploding story. Without them, Rubber suggests, the movie can't exist. And so, teamed with a mysterious accountant (Jack Plotnick), Lt. Chad, a cop who is painfully aware that he's in a cheesy horror movie, seeks to derail the crowd's "entertainment" — by any means necessary.

Cleanly directed, with off-frame close-ups, tour de force tire effects, and images that scream parody (Robert's "flashbacks" are particularly funny), Rubber plays like a drunken mash-up of Beckett, Troma and Hitchcock. From its absurdly foreboding soundtrack to its cheeky establishing shots to its commentary on the mindless voyeurism of audiences, irony drips from every frame (watch as the "audience" enthusiastically devours a turkey ... get it?).

And that, unfortunately, is not enough. Dupieux knows how to riff on the behavior and language of cinema but isn't clever or outlandish enough to sustain his film's 85-minute running time. Never building on his narrative ideas or offering any new ones, Rubber eventually gets caught in a rut, spinning its wheels and generating a whole lot of unpleasant smoke.

Yes, the film industry is absurd. Yes, even the most inane concepts can find their way in Tinseltown. Yes, audiences willingly lap up the stupidest crap. But as a young girl comments early on, Rubber is a bit dull, not at all what you'd expect from a Hollywood movie. Which may be ultimately be Dupieux's most meta message — a dare to abandon a movie that intentionally commits the greatest sin of all: bores its audience.