Even though Jude Angelini doesn't drink, he agrees to meet at a bar, where he orders a water with lemon. Once he returns to our table he dumps a vial of GHB into it, stirring it with a straw.

"It sucks because all the drugs that I like to do are kind of frowned upon," he says of his preferred high (which he describes as "wavy," "like having three glasses of wine after work"). "I don't drink, because it makes me depressed. I don't do weed because it makes me paranoid. I don't do coke because... Jesus Christ, the first time I was around coke knowingly it was a bunch of strippers talking about 9/11 right after it happened. I was like, I never want to sound this fuckin' stupid. I won't do that shit."

But Angelini's exploits with the drugs he has chosen to do are well documented — first in Hyena, his 2013 memoir that was originally self-published and later picked up by Simon & Schuster, and then in Hummingbird, a sequel that was released by indie publisher Rare Bird Books in September. Both books follow similar formulas — autobiographical tragicomedies of sorts, made up of short self-contained chapters detailing various misadventures with drugs and sex, told in no particular order. Many of the chapters in the two books push the limits of minimalism, with many just a few pages in length. All are told in Angelini's conversational, everyman style. The experience of reading them is not unlike sitting next to a chatty raconteur at the bar, alternating between chest-puffing braggadocio one minute and warning you not to make the same mistakes as him the next. 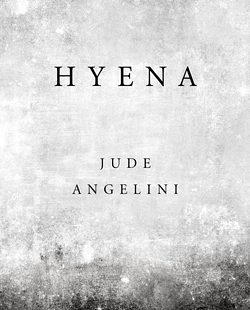 Angelini doesn't glamorize drug use, but he's not a total scold, either. Hyena was written following a PCP overdose that caused Angelini to miss his daughter's birthday. Hummingbird, he says, was written while coming down from ketamine. "I was catatonic for like four or five hours, and then I came to. I was fucked for a couple months," he says of the PCP episode. "I got dumber. But I also got wiser. I sacrificed IQ points for maybe a bit more patience and more understanding."

Now 40, Angelini has made a career out of brutal honesty. In the '90s, he developed a reputation as "Rude Jude," a recurring guest on The Jenny Jones Show, which saw the Pontiac native frequently driving to Jones' Chicago studios to basically make fun of guests and the audience.

His Jones break, he says, came from an episode about people who used to be ugly but were now attractive. For some reason, Angelini decided to accompany a childhood friend from Pontiac — kind of a "I used to make fun of you, and now I want to go out with you," bit, he explains. (It's not true, he explains. They were just hamming it up for television.)

"It was one of those things where most people would have been uncomfortable in that situation," Angelini admits (his own family begged him not to go, calling it "white trash TV"). "But everything the audience said to me wasn't half as bad as what my friends said to me in the neighborhood, so... I just murdered them."

He soon developed a following, thanks to his sharp wit and vicious sense of humor — and for occasionally donning colorful costumes such as a devil (who was then green-screened to appear to be sitting on guests' shoulders) or a boot camp drill sergeant.

In 2000, his popularity from the Jones stint got him name-checked on the then-rising Eminem's "Drug Ballad" from the Marshall Mathers LP. Angelini took that as a sign that he was destined for fame, and that he should head to Los Angeles to try his hand at acting.

It didn't exactly go well. Angelini says he had a hard time getting callbacks. Eventually, he scored a small role as a robber in a commercial, but he says it was because he had been robbed the last time he was in Detroit. "When I went to that audition, all I did was I just repeated everything the robber said to me," Angelini says. "And they're like, 'It's so authentic!'"

Running out of money, Angelini says he was getting ready to give up and move back to Michigan when he got another opportunity. Apparently, his stint as Rude Jude left a lasting impression on Eminem, who asked him to host The All Out Show on his then-new SiriusXM hip-hop channel, Shade 45.

"Everything that might be good on Jenny Jones — where I'm like talking shit, off-the-cuff type the shit — made me awful in rooms, but great on the radio," Angelini says.

‘I was fuckin’ petrified when I dropped that shit. ... I had to go do mushrooms in the woods, and just be like, whatever it is, it is, and just let it go.’ tweet this

He originally wrote Hyena with the help of a friend, Andrea Grano. "I was just so fucking insecure with my writing that I didn't trust anybody but my homegirl. She like, went to college. She's my college homie," Angelini says.

"The way I write, it's a direct response to my insecurity about not going to college," Angelini says. "I don't know big words. I mean, my vocabulary is improving. But I don't look at myself as educated. That type of writing puts me off."

Angelini says there was another reason he enlisted the help of Grano. "I thought it was important that a woman had her hands on it, because so much of it is about sex," he says. "Like fucking your way through a breakup, like dealing with pain by supplementing it with pleasure, and these weird empty ego boosts."

Angelini admits Hyena and Hummingbird might come off as misogynistic, as he recounts casual sex with unnamed exes. "That's not the point, he says. "Some people still read it like, 'This is macho bullshit.' It's like, it's not. I'm fuckin' shattered, and I don't know how else to deal with it. The one way I know how to deal with it is by sleeping with women to validate myself."

Angelini says he originally wrote Hyena with his Shade 45 fans in mind and no dreams of getting picked up by a big publisher. "When my first book was released, I released it independently, because you know, I'm talking about getting peed on by midgets and stuff," he says. "It was written like how we talk, and how we speak is offensive nowadays to the people who make decisions. So I just didn't want to put myself out there and be rejected." But through a connection he made at Jenny Jones, Angelini was able to get in touch with Simon & Schuster, who picked it up after just two months. 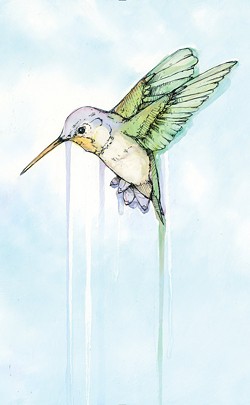 When it came time to write Hummingbird, Angelini says he worked solo. "I had figured out my voice by then," he says. "But I was afraid people weren't going to like this next book. It's dark. I'm talking about going through ketamine, this addictive personality, and self-medicating with drugs. ... It was like, that was vulnerable. I was fuckin' petrified when I dropped that shit. Like, straight-up anxiety. I had to go do mushrooms in the woods, and just be like, whatever it is, it is, and just let it go."

Simon & Schuster declined to pick up Hummingbird. Instead, Angelini inked a deal with Rare Bird Books, a small L.A.-based indie publisher. "They're known for dealing with more fringe people. We did the deal where we're just like in it together, 50-50. They understood that I knew my audience, and they allowed me to do what I needed to do," Angelini says. "You see the book, there's no writing on the cover. It's just a book. There's no way a regular giant publisher would let me do that. There's no way they'd let me put it out."

In the meantime, he's been pitching Hyena as a TV show; at one point, it was optioned by Mark Wahlberg (who coincidentally was also name-checked on "Drug Ballad") for HBO. Angelini is hopeful the book will attract a wider audience, and that the pitch could gain traction as Detroit's story continues to find itself in the national spotlight as it has in recent years.

"It's important to me that this book is shining a light on Michigan," he says. "Outside of the country, Detroit has become fetishized within the last few years. When I first moved out of Detroit, it was like telling someone you have Hep C. Like, 'Oh shit, you're from Detroit?' Now, you seen it — everyone and their fuckin' mom is moving here."

For his part, Angelini says he is trying to move back to Detroit. He says he'd like to try and split his time equally between L.A., New York, Detroit, and Nashville. ("I've been around 10 million people for the last 15 years," he says. "I'm like, tired of fuckin' people.")

It's an ethos Angelini says he brings to The All Out Show as well. "I'm breaking Detroit artists before Detroit motherfuckers. Tee Grizzley, I broke that shit last November," he says. "I love the new Detroit shit. I feel a lot of successful rap is done with an eye wink. They're not 100 percent committed. The Detroit rappers are sincere. People might look at them like they're just talking about Cartiers and bags, but they're sincere about it and I like that. And their sound reflects the city."

Similarly, he also thinks his stories have value for showing a slice of life from the post-industrial Midwest. "That was the problem I was having when I was pitching Hyena," he says. "They're like, 'This is nuts.' I'm like, 'No, this is normal.'"

"I'm not that different from a lot of people. This isn't shock shit," Angelini says. "This is just to show you what my normal is. I think that's important, because it shows diversity. You're showing different people's normal. Like on TV, it's a bunch of middle class people having middle class problems."

"On the coasts, we're still a flyover state," he says. "And I just wanted to say, hey man, we have a voice. This is one story."