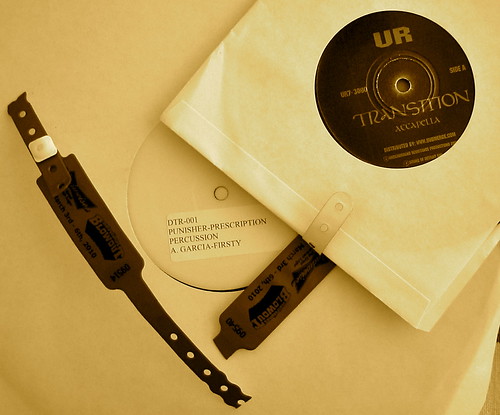 After congratulating the Detroit Threads massive on their first 12-inch release, buying the 7-inch accapella [sic] of Underground Resistance 's classic Transition, and congratulating Terri "Whodat" McQueen on her new business cards (new record shop, Ya Digg, coming soon), my Brother and I finished our Blowout experience with seven bands at six different venues. Man did it feel good to be "home."

However, I do have some advice for present/ future Blowout bands. The band with the best drummer that I physically saw was Silverghost's Deleano Acevedo.

Check out his kit: 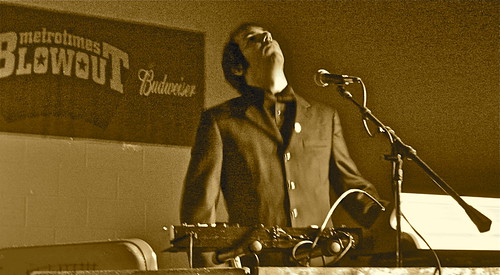 Silverghost's Acevedo with his "drum kit."

At the risk of belaboring the point, I recommend all Detroit bands check out Michael Winterbottom's portrayal of the emergence of Joy Division's sound, including the hysterical (and painfully accurate) criticism of young-Stephen Morris's drumming by Martin Hannett.

Hannett to Morris: "Nothin' was wrong with the drumming as such. It's just that people have been playing like that for 20,000 years and quite frankly, it's boring me ass off."

Great bands know why they sound and look the way they do, even if all they know is their style makes them tingle in their nether regions. Sounding like Neal Smith 40years later does not (or more to the point, should not) make anyone tingle.

That said the band of the night was Timmy's Organism, fronted by Timmy Vulgar. They made me tingle (and at least drummer Colin Sick had silver paint on his face) when they played "I'm a Nice Guy Now." Don't believe the lyrics but you might want to buy the 45. According to Mr. Vulgar the single is set to come out on Cass Records "next week."