Savage Love: I fell in love with my second cousin at a family reunion 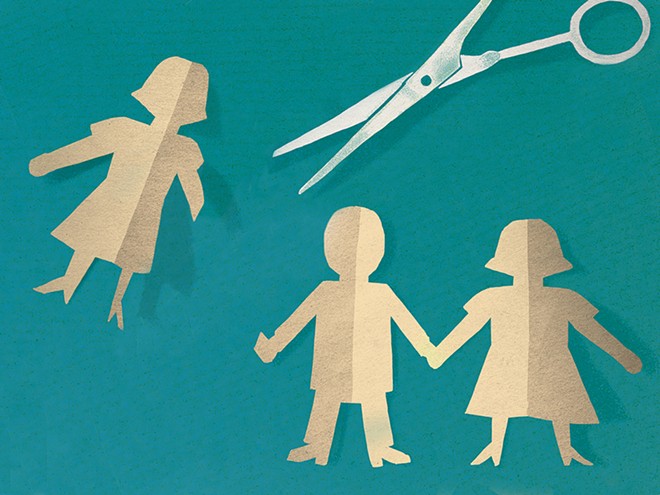 I fell in love with my second cousin about four years ago at a family reunion. (I hadn't laid eyes on him since I was a kid!) I was 15 when we met, he was two years older, and we were in a long-distance relationship for three years. We ended things a year ago, and I'm going to be seeing him for the first time since our breakup at another family reunion this fall. He's bringing his new girlfriend. Do I have a responsibility to make her feel comfortable? Do I avoid him and risk family drama? I've done so much to work through this, Dan, and I'd love to see this as a healthy exercise in staying true to myself.

—Cancel On Upcoming Shindig? I'm Not Sure!

I'm hoping it was just the usual heartache you had to work through after this relationship ended — by which I mean to say, COUSINS, I'm hoping your ex-boyfriend (and current second cousin) wasn't emotionally or physically abusive and you weren't working through trauma. And I'm hoping you didn't get too much grief about dating your second cousin from other family members. (First cousins can legally marry all over the world!)

Assuming your ex was only guilty of breaking your heart (a risk we take when dating anyone), you should approach this family reunion like any mature adult who finds herself at a wedding or a funeral or a holiday party with an ex. You slap a smile on your face and say hello to your ex, you tell his new girlfriend it's nice to meet her, and then you avoid both of them for the rest of day. If you're worried about getting trapped in a conversation with either or both of them, COUSINS, and don't have it in you to say, "I'm sorry, you'll have to excuse me, I gotta go take a monster shit," then deputize someone to run interference for you. Your designated interferer should stay by your side as much as possible, COUSINS, and if you get separated and they see you trapped in an extended conversation with your ex or his new girlfriend, COUSINS, it's their job to swoop in and rescue you.

And if family members gave you grief about dating your second cousin — if you were subjected to more than some gentle awkwardness-acknowledging, tension-releasing ribbing about the situation — and that grief was the source of whatever you had to work through since breaking up with the guy who was essentially your high school boyfriend (a guy you were always gonna break up with at some point), COUSINS, then this reunion is an opportunity to tell those people to go fuck themselves.

Should I worry about my son who is 24 years old, straight, cute, has friends and is also a virgin?

You can tell a mom not to worry, but a mom is still gonna worry, MOM, so you go right ahead and worry. But if your son knows he can talk with you about anything and he's chosen not to talk with you about this, MOM, and if your son isn't upset about it or otherwise miserable, leave him alone. If he has friends — and you say that he does — then he has peers he can confide in about his love life, assuming he wants one, and open up to about his sexual inexperience, if he regards it as a problem, MOM, which he may not.

I've been reading you for many years. You have great language skills. But your use of "gonna" and "wanna" for "going to" and "want to" just comes across as adolescent and condescending. You're too old to be using that sort of lingo, Dan. Please respect yourself and your readers.

You're gonna hafta pry those "gonnas" and "wannas" outta my cold, dead hands, GONNA, if you wanna get 'em outta my column.

Three months ago, I came out as polyamorous in an email I sent to my immediate and my entire extended family, because I'm done asking one of my partners to pretend he's "our roommate" when my parents or siblings come to visit, and it hurts me so much to exclude him from family events and holidays. (And it hurts him, too.) My whole family is getting together over Labor Day Weekend, and all three of us are planning to go. Is there any way to avoid awkwardness?

—Bringing All My Boyfriends Inside

P.S. They'll get used to you being poly, you'll get used to them knowing you're poly, and it'll get less awkward over time. But there's no way to avoid that first blast of pure awkwardness. Instead of trying to avoid it, BAMBI, try to have a sense of humor about it.

I was raised in a conservative batshit household and equally batshit church. The youth leader, who was my best friend's stepdad and who I viewed as a father figure, was a sexual predator. When I was 17, he started asking me for sex and also told me he'd thought of me "that way" since I was 12. I found out later he got a woman with a mental disability pregnant, and my childhood best friend has hinted to me that he assaulted her, as well. Much to my rage, this guy's wife, this church, and even my own parents never went after this guy legally or otherwise. Outrageously, he's still a member in good standing of this same church. A few days ago, a different childhood friend died. He was my best friend's cousin, and we all grew up together. Obviously, this asshole will be at the funeral. I'm determined to be there to support my friend, but how do I interact with this predator without causing a scene? I don't want to make this sad reunion about me, but I refuse to entertain this guy in any way. Any thoughts on telling him to go fuck himself?

Your childhood best friend dropped hints about being assaulted by this man — her stepfather — but she never actually came out and told you that. But you know for a fact that he preyed on a mentally disabled woman and that he sexually harassed you when you were a minor. And like so many sexual predators on altars, this asshole got away with it. There haven't been any consequences, no accountability, and he's still in a position — a position of spiritual authority — where he can (and probably does) abuse and exploit other vulnerable women and girls.

I'm pro telling this asshole to go fuck himself at the funeral — loudly — but there's something you could do before the funeral. While you can't control what your parents or this church have done or failed to do, FUNERAL, and while your childhood best friend's story isn't yours to tell — and you don't know or don't officially know the full story — you can tell your own story. You can report this asshole to the pious lowlifes who run this fucking church and file a police report at the same time. Oh, and make sure to let those church leaders know you filed a police report. While there's no guarantee they'll act against this creep after getting a report of sexual abuse (see Catholic Church, sex-abuse scandals), they'll at least know they're leaving themselves open to potential financial consequences if they fail to act (see Catholic Church, sex-abuse scandal settlements).

I've been to a few funerals in my time, FUNERAL, and it's not the people at the funeral we tend to remember — it's the people who were there for us before the funeral and after. Head home, be there for your old friend, and feel free to skip the funeral if that asshole is gonna be there.