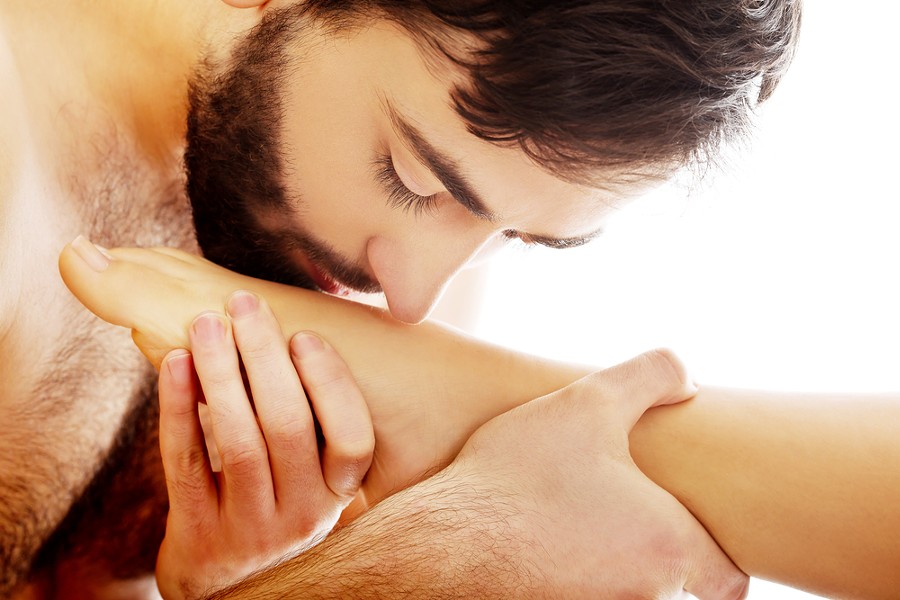 Q: I'm a lady considering taking on a foot fetishist as a slave. He would do chores around my house, including cleaning and laundry, and give foot rubs and pedicures in exchange for getting to worship and jack off to my model-perfect feet when I've decided he's earned it. Am I morally obligated to tell my roommates? Technically the guy would be in their common space too. I will fully vet him with references and meet him in a neutral location at least once — and anything else you might suggest I do for security's sake. Though my roommates are not what you would call conservative, I'm not sure they'd understand this kind of arrangement. I would have my slave come over when no one is around, and then my roommates could come home to a sparkly clean common area! My slave would never have access to their personal spaces, nor would I leave him alone in any area of our home until a strong bond of trust had been established. No harm, no foul? Or am I crossing a line? — Man Into Cleaning A Shared Apartment

A: A friend in Berlin has a similar arrangement. This guy comes over to clean his apartment once a week and — if my friend thinks he's done a good enough job — my friend rewards him with a knee to the balls. It's a good deal for both parties: My vanilla-but-kink-adjacent friend gets a sparkly clean apartment (which he loves but doesn't want to do himself), this guy gets his balls busted on a regular basis (which he loves but can't do himself). But my friend lives alone, and that makes all the difference. Or does it?

Time for some playing-games-with-foot-fetishists theory: If you were having sex with a boyfriend in the common areas of your apartment when your roommates weren't home — let's say your boyfriend (or even some rando) wanted to fuck you on the kitchen floor — you wouldn't be morally obligated to text your roommates and ask their permission. But we're not talking about a normal guy here or normal sex — we're talking about a fetishist who wants to be your slave. Does that make a difference? It might to people who regard kinksters as dangerous sex maniacs, but a kinky guy isn't any more or less dangerous than a vanilla guy. And a kinky guy you've gone to the trouble to vet — by getting his real name and contact info, by meeting in public at least once, by asking for and following up with references — presents less of a threat to you and your roommates than some presumed-to-be-vanilla rando one of you brought home from a bar at 2 a.m.

Strip away the sensational elements — his thing for feet, his desire to be your chore slave, the mental image of him jacking off all over your toes — and what are we left with? A friends-with-benefits arrangement. A sparkly clean apartment benefits you (and your roommates); the opportunity to worship your feet benefits him. This guy would be a semi-regular sex partner of yours, and while the sex you're having may not be conventional, the sex you have in your apartment — including the sex you might have in the common areas when no one is at home — is ultimately none of your roommates' business.

That said, unless or until all your roommates know what's up, I don't think you should ever allow this guy to be alone in your apartment.

Q: My girlfriend drunkenly confessed to me that she used to pee on her ex. I'm not sure what to do with this info. — Dude's Relationship In Peril

A: Did she ask you to do something with this info? Did your girlfriend say, "Hey, I used to pee on my ex — now go make me a dream catcher with that news, would you?" Your GF got a little kinky with an ex, most likely at the ex's request, and so what? If piss isn't something you're into, DRIP, don't obsess on the distressing-to-you details and focus instead on the big picture: You've got an adventurous GF. Congrats. If she doesn't have an equally adventurous BF, here's hoping she finds one.

Q: My 7-year-old son started getting really into gauze, splints, and bandages when he was 3, and by the time he was 4, it became clearly sexualized. He gets a boner when he plays "broken bone" or just looks at bandages, and he has expressed how much he loves to touch his penis when he does this. My husband and I (both happily vanilla) have been accepting and casual about this. We've provided him with a stash of "supplies," taught him the concept of privacy and alone time, and frequently remind him to never wrap bandages around his head or neck. Is it normal to be so kinky at such a young age? I know kinks generally develop from childhood associations. When he was 2, he had surgery to correct a common issue on his groin. Might that have sparked this? I want my son to grow up with a healthy and positive sexuality. Are we doing him a favor or a disservice by supplying him with materials, freedom, and privacy to engage in a kink so young? — Boy Always Needing "Doctoring" And Getting Edgier

A: Your son's behavior isn't that abnormal, BANDAGE. It's standard for kids, even very young kids, to touch their genitals — in public, where it can be a problem, or in private, where it should never be a problem. And lord knows kids obsess about the strangest shit. (What is the deal with dinosaurs, anyway?) Right now your son is obsessed with bandages and splints and gauze, his interests aren't purely intellectual, and it's easy to see a possible link between his experience with bandages and gauze in his swimsuit area and his obsession.

None of this means your son is definitely going to be kinky when he grows up, BANDAGE — not that there's anything wrong with being kinky when you grow up. There are lots of happy, healthy kinksters out there, and your kid could be one of them when he grows up. But it's too early to tell, and so long as his interests aren't complicating his life (he's not behaving inappropriately with friends or at school), your son's whatever-this-is will become less of your concern over time and ultimately it will be none of your business.

In the meantime, you don't wanna slap a "so kinky" label on a 7-year-old. (If he were to overhear you using that term to describe him, does he have the computer skills to google it himself?) But you're doing everything right otherwise. You aren't shaming your son, you aren't making bandages and gauze and splints more alluring by denying him access to them, you are teaching him important lessons about privacy and what needs to be reserved for "alone time."

You ask if it's normal to be "so kinky" (a phrase we shall both retire, at least when referring to your son, after today) at such a young age. Probably not — but so what? According to science, most adults have paraphilias, aka "non-normative sexual desires and interests." That means kinks are normal — at least for grown-ups — so even if your son isn't normal now, BANDAGE, he'll be normal someday. Most happy, healthy, well-adjusted adult kinksters can point to things in their childhood that seemed to foreshadow their adult interests in bandages/bondage/balloons/whatever. Author, journalist, and spanking fetishist Jillian Keenan (Sex with Shakespeare) was fascinated by spanking when she was your son's age; Keenan likes to say she was conscious of her kink orientation before she knew anything about her sexual orientation. So while your son's behavior may not be "normal" for a kid who grows up to be vanilla, it would be "normal" for someone who grows up to be kinky.