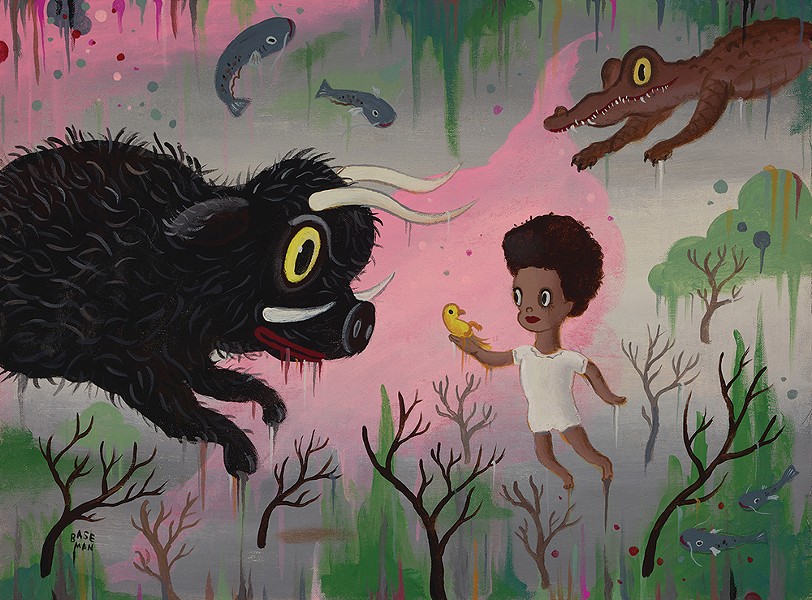 This week, Detroit's Westin Book Cadillac Hotel will play host to the Icon illustration conference — the first time the biennial gathering has been held in the Motor City. And while the conference is geared toward professional illustrators (tickets run $620, and grant access to workshops, artist talks, demonstrations, and more), there's an opportunity for the general public to take in some top-notch illustration work through an auxiliary gallery exhibition.

Though not officially affiliated with the conference, the Scarab Club's exhibition — titled Krēm — will feature a number of big names in illustration: Gary Baseman, Seymour Chwast, Sue Coe, Joan Cornella, Brad Holland, Anita Kunz, Yuko Shimizu, Gary Taxali, and Detroit's own Glenn Barr, among others. It was organized by illustrator and College for Creative Studies professor Stephen Schudlich, and will feature in total 29 artists and more than 30 works. (Full disclosure, Schudlich is a former professor of mine.)

"A lot of it is based on personal icons of mine coming up in the business, as well as trying to look at both a contemporary, newer generation of mark-makers," Schudlich says. The show features a mix of old work — Chwast submitted a work originally created for Esquire magazine in 1978 — along with some new works created specifically for the show.

As Schudlich explains, illustration differs from fine art in that it's utilitarian by design — these are images that are meant to, well, illustrate something. "It's selling a widget, or it's illuminating an article," he says. "It's not in a baroque frame hanging over at the DIA." (Although one piece in the show, a portrait of President Donald Trump by Ross MacDonald, is in a baroque frame. "I couldn't be more sarcastic, when I framed it," Schudlich says.)

Schudlich says if there's anything that unites the works in the show, it's that they're "vital, in social purpose" he says. "The work is beautiful. Some of it's very painterly and some of it's more draftsman-like. Some of it you can detect a very strong graphic design sense in the work, and some of it is just image making. It's a wonderful grouping, and I couldn't be happier with the people who responded."