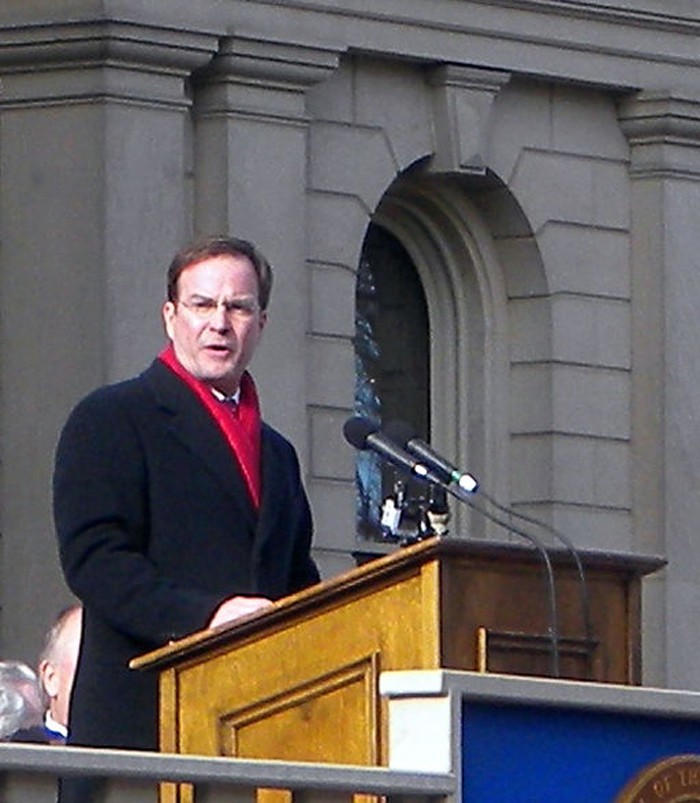 That momentous legal affair, which ended Thursday, brought Schuette and his team out to vociferously defend Michigan’s 2004 constitutional ban on same-sex marriage. Two lesbian nurses, April DeBoer and Jayne Rowse, are seeking to overturn the marriage ban. Things, it seems, did not go well for poor Bill. (U.S. District Judge Bernard Friedman, who oversaw the case, says he’ll deliver a written opinion within the next week.) And it did not go well right out of the starting gate.

On Monday, Friedman told the state’s first expert witness to hit the road 20 minutes after taking the stand.

“He’s very eloquent … but right now, all he is offering to us is mainly his opinions,” Friedman said of the witness. “The court does not believe … that he should be allowed to testify.” The witness, Sherif Girgis, was expected to be on the stand for as long as two hours, the Freep reported. When Girgis was through babbling about his credentials and academic papers, Friedman cut him loose.

Jesus, where did Schuette pick this bunch? While the AG’s spokesperson tells the Hits the bill for this “expert witness” shouldn’t exceed the average cost, it surely exceeds the tally of state tax dollars that should be allotted for Some Guy With Irrelevant Opinions.

It didn’t get much better. The state also flew in Mark Regnerus, a University of Texas sociologist, who, as Slate pointed out last week, is a shameless anti-gay basher. He conducted a study in 2012 that says children of same-sex marriages face more disadvantages than kids raised by a male and female. Regnerus testified that it’s “intellectually frustrating” that science has virtually closed off the debate of same-sex marriage, according to the Freep.

“The most prudent thing to do is wait … before making a radical move on marriage,” said Regnerus, who urged the state to uphold its ban on same sex-marriage.

Right. How radical! The choice of words gave us a laugh, as Regnerus himself is largely seen as a somewhat radical figure. Slate, for instance, points to one reviewer of Regnerus’ seminal work who dismissed his study as “bullshit.” Literally. And the University of Texas distanced itself from its own employee after his testimony, saying in a statement that Regnerus’ “opinions are his own. They do not reflect the views of the Sociology Department of the University of Texas at Austin. Nor do they reflect the views of the American Sociologist Association, which takes the position that the [conclusions] he draws from his study … are fundamentally flawed on conceptual and methodological grounds.”

And it must be frustrating for the guy whose survey boosted a religious right marketing machine to see social science end a debate that 17 other states already realized should’ve been quashed awhile ago. It’ll mean all the fewer paydays for “Radical” Regnerus in the future.

It’s clear, at least to us, that Schuette’s grasping at straws. That — perhaps — a constitutional amendment perpetuating blatant discrimination is, in fact, unconstitutional.

So, thanks, Bill. On behalf of the taxpayers of Michigan, we ask, “Is that all you really had?”

It turns out, not at all.

Douglas Allen, come on down! A Canadian economist, Allen delivered some closing remarks that specialized in the supernatural.

According to the Freep, the plaintiffs’ attorney Ken Mogill asked Allen: “Is it accurate that you believe the consequence of engaging in homosexual acts is a separation from God and eternal damnation? … in other words, they’re going to hell.”

In case you’re keeping score, we’ve got unsupported vagaries and empty religious rhetoric so far and … nothing else. This is Schuette’s sanctimoniousness on full display for the world. The attorney general’s spokesperson tells the Hits that Schuette is simply doing his duty to defend the state’s constitution. That’s not the entire truth, of course. Schuette is a longtime fervent defender of anti-gay legislation. Schuette certainly could have chosen not to defend the gay marriage ban — Kentucky’s attorney general chose that road this week. That’s not Bill’s style, though. If it takes paying an expert in the supernatural who truly believes unrepentant gays will burn in hell to defend the ban, fuck it, bring him in.

The attorney general’s office has yet to receive a bill for the expert witnesses. But, Schuette’s spokesperson confirms, a number of them will be compensated. At this point, it’s unclear how much the final tab will be.

In the midst of this state’s fragile economy, it heartens us to know somebody’s making a buck off this sideshow.