March 06, 2009
comment
Thursday night at the Knights of Columbus (hall and lounge) on Conant was a-hoppin'. At the wristband desk, we clicked in more than 500 guests over the course of the night, making the K of C one of the busiest destinations on Blowout's first night. With Zoos of Berlin, Daniel., Devilfish and Blase Splee in the lounge, and Rogue Satellites, Marco Polio & the New Vaccines, Deastro and the Silent Years in the hall, the 51-year-old social center filled up with twentysomethings and a few adventurous older types (including some of the bands' parents) to take in all the shows. But between the bushy oldsters and the beardo hipsters, there were enough whiskers around to hark back to the hirsute heyday of 1970s rock.

One notable exception to this festival of facial hair was the keysman for Marco Polio & the New Vaccines. While his bushy bandmate rolled and rushed, tore up textbooks and showed asscrack, the sedate synther held sway over by the keyboard, a clean-shaven, eyeliner-decorated Gary Numan look-alike, looking just as surprisingly smooth as old Numan must have in the beard-drenched late 1970s. (The only difference would be that, back then, the hairy dudes would've stomped all over anybody who looked like that. Savor the difference.)

Let's go to the photos, shall we? You decide. 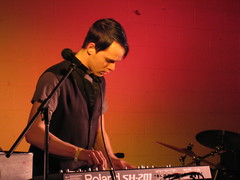 The keysman in the K of C hall. 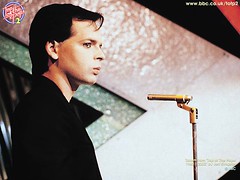