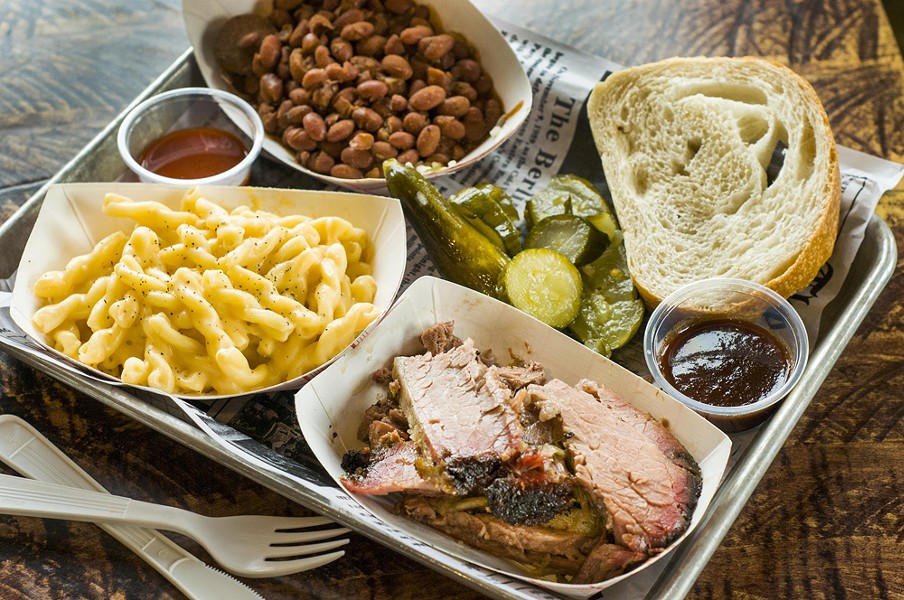 It's a good sign as you approach Shark's BBQ: two enormous black cylindrical fire pits and stacks and stacks of firewood sit outside. Chef-owner Louai Sharkas uses no gas or electricity to fire his meat, just oak and cherry burning in enormous drums that he designed himself, tinkering to produce just the right flows of heat and smoke.

He fires the pits four to six times a week for a continuous supply.

I asked Sharkas how his pulled pork looked so lean and yet tasted so marvelously fatty. He claims that the heat produced by wood and the type of moisture it makes in the pit is what "renders out the fat, yet it tastes moist. You can't duplicate that in a gas pit. Ninety-five percent use gas. In Texas and on the Gulf Coast and in the Carolinas, you still find people doing it this way."

A chef for 40 years, Sharkas says "barbecue is all trial and error."

His trials have led him to double-fire his beef brisket and his pork shoulder. He fires for six hours, lets the meat sit overnight, and then refires for four hours for the proper texture. Turkey and ribs are fired just once.

The meat is injected with nothing; it's rubbed with salt, pepper, and a little garlic to sit overnight — no sugar, all savory.

But Sharkas still has to tinker: "90 degrees or zero, I got a fire," he says. "Certain times of year, the wood is too fresh so the temperature doesn't get high enough. Wind is a factor — how cold. You have to make adjustments."

The result of all this trial and error is meat heaven. The emphasis is on the meat — as it should be — not on the sauce. All the barbecue cliches are there: fall-off-the-bone, juicy — but let's be honest, with pulled pork, it's the creamy, melt-in-mouth fattiness the chef and the customer are looking for.

Ribs are bright pink and hammy, lightly charred on the outside. The brisket has something extra going on that's not the least bit sweet, a little bit of tangy crust. Sharkas says the brisket is his biggest seller because it's hard to do.

"You don't find great brisket at every barbecue restaurant" (or find it at all, for that matter). The turkey breast is less exciting, but still as good as you can get with this bland cut. I didn't bother with the chicken breast.

Each meat choice comes with a thick slice of housemade bread and two sides, all of them large. Red beans and rice maintain their shape and are just a little spicy — Southern, not Mexican. Mac and cheese, with visible pepper, is gemelli with a five-cheese blend: hand-grated (duh) Parmesan, American, jack, cheddar, and a bit of blue "for nuttiness and funkiness."

Pungent collards still have some structure — they're not cooked to death. The corn bread is sweet and moist, with a few whole kernels. If you insist on meat even in your side dish, the gumbo has some unexpected flashes of heat. Coleslaw, side salad, and fries are possible too.

The tasting plate with brisket, ribs, pulled pork, and turkey is probably the best way to go, or the two-meat plate — your choice. Or do what my friend did and pile it on with "BBQ Mac & Cheese," which sounds unlikely: it's pulled pork and brisket on a bed of mac and cheese, topped with barbecue sauce and raw red onions. Somehow it feels more excessive when it's all in one dish.

Most of Shark's business is at lunch — landscapers and executives form a line out the door, he says. Dinner is quiet, but if he can figure out how to grow that end, he'll be taking advantage of his full liquor license. For now, there's beer and wine — a large glass of wine — ever notice how the fancier the joint, the stingier the pour?

Soda is Detroit City Soda from Michigan sugar beets (no corn syrup). I liked orange cream, which tastes like an intense Creamsicle. And a Key lime pie topped with whipped cream is the best dessert you won't have room for.

Like everything else in the restaurant, the tables are the chef's creation. When Sharkas' former employer, the Birmingham Country Club, chopped down maples some years ago, he rescued them from the grinder, found someone to mill slabs from them, had them kiln-dried and planed, and did the finishing himself. The results are beautiful, live-edge tables that fit Shark's all-wood ethos.