Sherlock Holmes: A Game Of Shadows

True bromance - From Paris to Germany to Switzerland, Holmes and Watson face assassins, booby-traps and a super-smart adversary 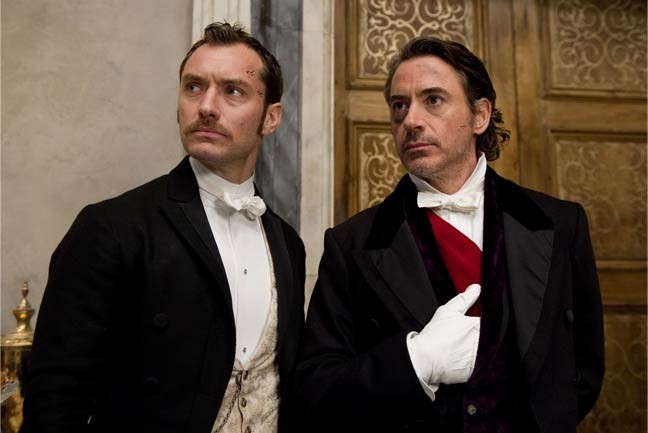 Sherlock Holmes: A Game Of Shadows

I'll say one thing, when you hire Guy Ritchie as your director you get your money's worth — not necessarily in quality but certainly in effort, volume and exuberance. While Sherlock Holmes purists will still bristle at Hollywood's reinvention of the genius detective, A Game of Shadows does what most sequels set out to do: offers bigger explosions, more elaborate stunts and grander set pieces.

And even if all those things fail (some do, some don't), there's still the cheeky fun of watching Jude Law and Robert Downey Jr. snipe at each other like a homoerotic odd couple, consummating their bromance through innuendo-laden banter and frantic shootouts. To be honest, without them, the movie would be a lumbering and bombastic bore. But that's a lot like saying that Stars Wars would be meandering, cut-rate space opera without Luke Skywalker and Han Solo (a claim validated by The Phantom Menace).

It's 1891, and Europe is in chaos. London is suffering a rash of anarchist bombings while France and Germany are on the brink of war. Sherlock Holmes (Downey Jr.) is convinced that the growing unrest has been orchestrated by the Napoleon of crime, Professor James Moriarty (Mad Men's Jared Harris). But by dedicating himself to the defeat of his arch-enemy's nefarious plans, Holmes has not only put himself in danger but also all those he cares for. Not only does his girlfriend-rival Irene Adler (Rachel McAdams) suffer at Moriarty's hands, but Dr. Watson (Jude Law) and his new wife Mary Morstan (Kelly Reilly) become targets. The personal becomes the political, as Holmes struggles to keep his friends alive, assist a gypsy woman (a wasted Noomi Rapace), enlist the aid of his smarter brother Mycroft (the wonderful Stephen Fry), and unravel a cross-continent conspiracy that may ignite a world war.

From Paris to Germany to Switzerland's Reichenbach Falls, Holmes and Watson take on assassins, booby-traps and an adversary whose intellect may surpass their own. Too bad Ritchie never takes aesthetic advantage of his European settings, rendering everything in a grimy, gray color scheme that makes each exotic locale look just like Victorian England.

Commotion is favored over cleverness, leaving Game of Shadows' plot muddled, messy and manic. The chases, fistfights and firefights come with whip-crack speed and thunderous energy, but little narrative drive. There's a gambling house brawl, an explosive railway attack, a weapons plant showdown and a frenzied forest chase. Each has its exhilarating moments, but Ritchie doesn't know when to quit, extending his slow-then-fast-then-slow action scenes five minutes longer than necessary.

Filling the dramatic cracks between the disjointed action sequence are zippy exchanges between the roguish Holmes and exasperated Watson, comic interludes and slowed-down moments that illustrate Holmes' power of deduction. It's engaging enough but doesn't really add up to a story the audience can invest in. By the time we reach the film's dizzying cliff-side climax, Richie's banal tale of war profiteering seems almost beside the point.

That said, the final confrontation is better than it has any right to be. Capitalizing on Harris' fiendish charisma and Downey Jr.'s scruffy, deadpan confidence, Game of Shadows turns that most clichéd of contests — a chess match — into a crackling duel of intellects. It's the stuff of great film moments, playing out Arthur Canon Doyle's "The Final Problem" with wit and verve, and delivering an ending even hardcore Holmes fans will admire. But newfound fans fear not, Ritchie throws in a pre-credit postscript that not only repeats one of the movie's best gags but makes room for yet another sequel.