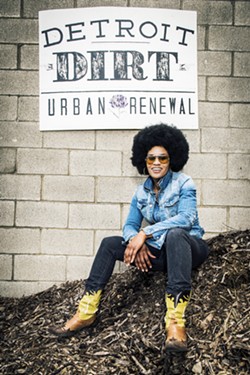 In general, when people think of Shinola, they think of handsome timepieces with well-crafted leather bands. Or maybe they think of a company with masterful marketing. But, they definitely do not think about dirt.

Pashon Murray, founder of Detroit Dirt, is about to change that. Murray moved to Detroit in 2010, in hopes of starting a recycling company, but things took a turn when she discovered most dirt in Detroit is unusable. And thus, Detroit Dirt was born.

Now, Murray, with the help of partners at Goodwill Industries of Greater Detroit's Green Works, Michigan Box, and Shinola, will be selling 100 percent organic worm casting compost starting May 14 in Shinola stores.

"Shinola has always been very supportive of my story," Murray says of her partnership with the lifestyle brand. "So, when they offered to help with marketing, it really maximized the relationship and the potential of Detroit Dirt."

The compost will be sold in five pound bags for $30 each. The packaging, created by Michigan Box, is all biodegradable, adding to Murray's mission of creating zero waste.

"It's about protecting the people and the planet," she says. "I take pride in having a very clean product. We know every ingredient exactly. It's just as pure and organic as it can get."

The Green Work's mission is to help people with employment challenges — those with mental illnesses, developmental disabilities, and previous incarcerations — find long-term employment. Their role in helping make Detroit Dirt a reality is connecting those people with Murray in hopes of creating a resume-worthy work experience that will help them achieve their ultimate goal — economic stability.

"This is a powerful story to tell," Varner says. "The work experience is helping to change these peoples' lives."

As for how long the compost will be available at Shinola, both Murray and Varner seems optimistic about the relationship, but are not yet sure of a time table. Murray says she is also working to secure other retail partners, in addition to Shinola.

"I'm a true entrepreneur," she says. "So, I know things never go as planned."