Sisters of Your Sunshine Vapor want to psych you out 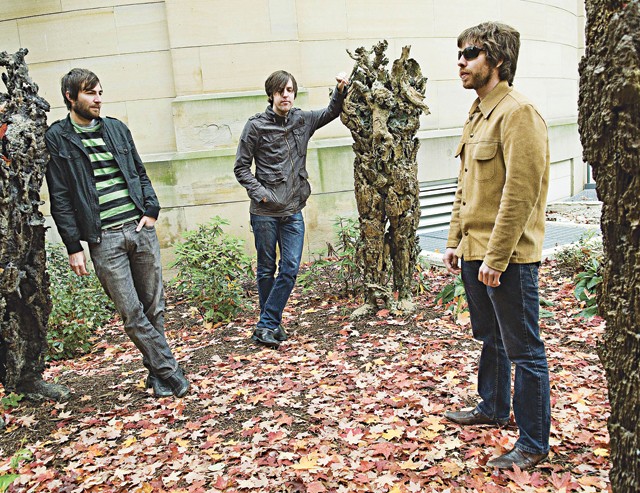 Two songs into the set, Sisters of Your Sunshine Vapor singer and guitarist Sean Morrow queries the quaint, intimate crowd at PJ's Lager House: "How many people were at the Last Supper?" After a few chuckles a voice in the back shouts, "Twelve!" "That's more people than who showed up here tonight," Morrow chuckles. The small gathering is unusual, as the trio has been enjoying a stretch of really good and crowded shows. But despite that, they stormed through their set as if feeding on the energy of a roomful of sweaty, fist-jacking fans — a rock show by definition.

Morrow cradles the microphone, fiercely staring out into what singers stare out into, which now can only be the abyss, intoning of dark things. As he shakes and scrapes his candy-red guitar, he periodically twirls various knobs on his effects board — which looks rather like a space shuttle cockpit. Eric Oppitz stands firm, his huge hands wrestle out guttural bass notes, while Rick Sawoscinski pounds his drums with a kind of tribal patience. All the while trippy images bounce about the stage via projectors. The whole thing's a neo-psych headfuck: sometimes groovy and illuminating, other times downright creepy.

The Livonia-based Sisters crew has turned heads in and around these parts for the last few years. They've rocked Austin Psych Fest, Blowout and, back in April, opened for (and maybe even upstaged) the Black Angels. Now they're set to release their sophomore album, the aptly titled Spectra Spirit, this Friday, Nov. 11, on Detroit's cleverly monikered and intensely local New Fortune Records (Ricky Rat, the High Strung, the Boxing Lesson). Then they're off on an East Coast tour beginning in Cleveland.

Some backstory: Sisters of Your Sunshine Vapor rose in 2009 from the ashes of garagists' SikSik Nation; same exact band, different name.

Why the name change?

Where SikSik Nation would throw a barrage of neat, tri-minute toe-tappers at you, Sisters aim to, as Morrow once put it, "give you life in an hour."

But isn't Sisters of Your Sunshine Vapor a bit unwieldy for a band name? It even has more words than the band does members. ...

No, Oppitz says. The hefty moniker definitely catches people's eyes. "People often say to us: 'What do I do, fucking trip acid before I see you guys?"

In the basement of Morrow's place out in Livonia, the band has set up a recording studio, which they've christened Space Camp Studios. Originally, the cozy, low-lit, all-analog spot was built to capture the band's lengthy jams, but they've also taken to recording local bands such as Pewter Cub, Haunted Leather and Bright Echo.

As is the nature of the music biz these days, every aspect of the band's existence is handled in-house, from booking or management. Dudes don't need much in the way of pro help. They let the music do the talkin'.

"Why pay, like, $5,000 to one douche bag so he can tell all his douche bag friends that your band is good," Morrow says. "If the music's really that good, it might take a longer time to get it to people but it's going to perpetuate. People are going to like it for what it is, not because someone told them to."

So granted, outside of music distribution, the band doesn't need much help from a label either. "Mainstream labels are going bankrupt and defunct and they're definitely getting what they deserve for what they've done," Morrow says. "But, I feel like a lot of the bigger indie labels are mimicking and imitating what those major labels do. So, why would we want to have to deal with someone, even on an independent level, to give us constraints and tell us what we can and can't do?"

Sawoscinski chimes in: "If some label approached us that could do more than what we're doing and provide more and not put us in a position where we would regret the contract, then we would do it. One thing a label can provide that we can't is a bit of legitimacy. That sucks. But you can't do SXSW, or CMJ or book a European tour without somebody behind you helping out."

The members each log in about 30 hours a week just doing the band shit. Of course, it's easier to focus on your music when two-thirds of your band is unemployed. Morrow is a former teacher, while Oppitz worked in interior and graphic design (he still freelances if the opportunity arises). Sawoscinski is the only true working stiff, doing full-time IT work at the University of Michigan's medical school. Even so, the band makes do. "It's a tough gig," Morrow laments. "We're living the lifestyle and doing music pretty much 24/7. But, there isn't any money in it. But," he adds, "we're still blessed with the opportunity."

The self-titled Sisters debut (dropped 2009, same year they became the Sisters of Your Sunshine Vapor) was something of a cosmic musical journey. It was drenched in reverb and effects, yet felt warm and organic. Some songs were tight, fleshed-out pop-psych, while others sounded like a bender put to musical form. It recalled everything from the Doors' death march "The End" to the hazy, repetitive groove of neo-psych bands such as Spacemen 3, Loop or Mazzy Star. Badass stuff, to be sure.

Spectra Spirit essentially continues where the first one ends. But, the mood's considerably darker and the atmosphere is more anxious, even murky. "We just locked ourselves in that house for six days straight and we just did it 24/7," Morrow says. "There's a lot of tension on it."

This new dark thing hangs throughout the album. "Black Mind" — with its effects-riddled guitar and thick organ drones — would soundtrack the post-apocalypse quite nicely, thank you very much.

"There are a lot of bands that make people want to crack open a beer and party and dance — and that's cool," Morrow says. "That's their mood. There is that beautiful side to life. I'm a cheery person. We're all cheery people. Then, there's the other side to life. Like what the fuck is going on in the world right now, especially what's going on in the city and state right now and how people are really feeling. It all ties in to how we write."

Psychedelic albums are supposed to be a bit exploratory and drug fueled by default — you know, the sound of exploring your senses in the deepest possible way — but, in places, Spectra Spirit just reeks of it. "We got a little bit more fucked-up when we wrote this record," Sawoscinski laughs with undetectable irony.

The guys have a love-hate relationship with Detroit. Who doesn't? Until about a year ago they'd draw bigger crowds when they'd play Cleveland and New York. The trend has shifted and now a typical Sisters show can get mighty packed very easily.

And since they do nearly everything themselves, they can measure success or failure on their own terms. "There's no money left in music," Morrow says. "But, if someone said that they'd pay me $10 an hour to play music for the rest of my life, I'd fucking do it in a heartbeat. I think we're embarking on an age of music that is going to be on the cusp of being revolutionary, like the Doors and Stones or any of that '60s stuff. Music has been so inundated and so saturated that the world is begging for something raw."