Serving up some of his best 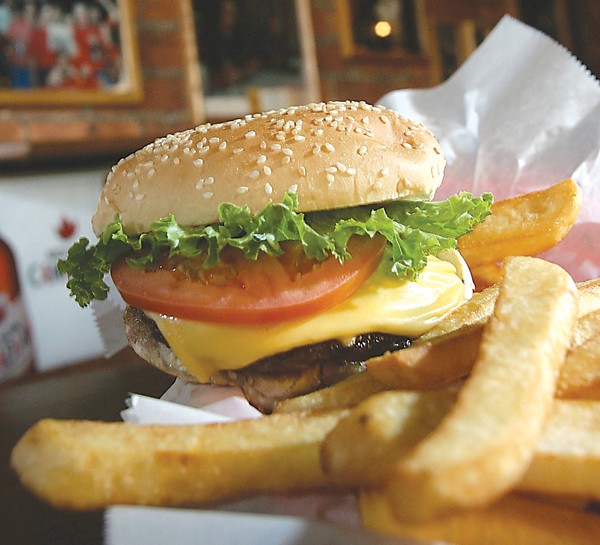 As we've noted before, after sharing his meals with Metro Times readers off-and-on over three decades, Mel Small is folding up his napkin. But when we listened to WDET's Craig Fahle interview Mel on that subject the other day, we thought a) that we wanted to share some of that conversation with readers and b) that we might mosey back into our archives and excerpt from some of Mel's favorite reviews spanning the time from the early '80s to recent years.

Mel, a longtime professor of history at Wayne State University, told Craig — and you can read the full interview transcription online, or link back to the show at WDET.org — that for a "grizzled old retiree," he was looking forward to being done with deadlines in ending his food reviewing, and that he was worried that he might slip up and use a word that he'd avoided in all his reviews: "delicious." He reflected on the way the national media consider metro Detroit part of "flyover country" when it comes to things culinary. But even though we might lag behind hipper locales in adopting, say fish tacos or beet salad, Mel told Craig, "I think we have had a vibrant and especially diverse series of restaurants over the years — especially diverse in ethnic restaurants." He talked about fabled restaurants of yore — the immortal-in-some-memories London Chop House and such.

His reviews chart changes, culinary and more broadly social over these years. In the early years, 313 covered all of metro Detroit, yuppies were an invasive species and "tapas" had to be explained to readers. Of course, we suspect that, one way or another, Mel's off-and-on writing for us will be on again. Until then, we have this sampler:

Open the door of the Royal Eagle, on the ground floor of the Parkstone Apartments in Indian Village, and you are in the spacious dining room of a Central European hotel of the late '30s that is sliding most gracefully from the deluxe to the first-class category. Thick carpets, heavy armoires, ornate chandeliers and walls crammed with large pieces of art overwhelm the senses. Could that be Helmut Dantine conspiring with Akim Tamiroff over in the far corner? If the Royal Eagle didn't serve food, the room alone would be worth the trip. But chef-owner Daniel Kozak does serve food — Polish haute cuisine, which is to kielbasa as Peking Duck is to chow mein.

You don't need to own a boat or even pay a membership fee to eat and drink well at the Polish Yacht Club, less widely known by its proper name, the Ivanhoe Café. In fact, proprietor Agnes Senkiewicz frowns upon her patrons trying to approach by sea, since the PYC is several miles from the nearest body of water. It is difficult enough to approach by land, as it stands virtually incognito in a residential part of Poletown that escaped the wrecker's ball. ... Just about everyone comes in for the fabled perch dinners that are served for lunch on Wednesday through Friday and for dinner on Friday night.

After putting together $200 worth of food stamps as capital in 1977, Vietnamese refugee Nguyen Huy Han opened his West-East Ethnic Restaurant, or WE, in a former A&W root beer stand in downtown Pontiac. Since then, the former lawyer, economist and self-proclaimed honest tax minister in the South Vietnamese government has presided over one of the most unusual restaurants in the region. Along the way, he has turned out the best Vietnamese food this side of the Detroit River. ...

WE is not just an acronym; it reflects the fact that the tiny restaurant is a co-op as well. More than 7,000 registered customers receive rebates on their yearly accounts, the amount varying with the restaurant's profit margins. Han, who is writing a book about his unique brand of Christian humanism, sees his restaurant as belonging to the community that greeted him so warmly when he came to the States in 1975.

The Bagley Café has reopened! For those who enjoyed the homey storefront's spicy Turskish fare and rock-bottom prices, this is good news indeed.

Everything seems the same — the handsome framed posters, the large window providing views of bustling Bagley in Mexicantown, the high ceiling, even most of the staff. But the Bagley Café is now a Spanish restaurant, Detroit's only one at that. It's a complicated story, so don't ask why that happened. ...

Alas, the yuppies will soon discover the Bagley Café, since it features tapas, one of the staples of New York and Los Angeles yuppiedom. Tapas are little plates of appetizers, which, when ordered in sufficient number, often take the place of an entire meal.

"The Roar of the Hot Dogs, the Smell of the Crowd," May 11, 1988; Tiger Stadium, Michigan at Trumbull; not to be confused with today's Comerica Park.

This is the problem with any attempt to evaluate the quality of the food at Tiger Stadium. Everything tastes just a little different inside its homey confines. Leaving aside the unmatched ambience, what can one say about the variety of edibles offered by the Bismarck Corporation, purveyor of tons of fast food to Tiger fans for the past five years?

First, one should begin the nibbling with peanuts bought from one of the vendors outside the stadium. Their little brown bags (usually from Rocky's in the Eastern Market) contain three times as many peanuts as the plastic-wrapped Kars version sold for the same $1 inside. ...

Once inside, the first decision is whether to buy food from roaming vendors or at the concession stands. Relying on the vendors, you won't miss any of the action, but they do not offer a full array of items, and they are not always around when you want them.

On the other hand, you will probably have to wait in line at the concession stands and maybe miss an inning or two. Nothing is more depressing than to be in line and hear that roar from the crowd. What was it? A grand slam? A triple play? A bench-clearing brawl? ...

The person with whom I live claims that there is nothing like a hot dog at Tiger Stadium. She is not talking about the way they "plump" or that the griller has a way with wurst. She is talking about a uniquely sublime experience — the warm summer sun, the community of fans, those magical days when one can almost catch a glimpse of Horton and Kaline patrolling the lush, incredibly green field. On such days, even the London Chop House's finest piece of beef is no match for a Ball Park Frank.

Every now and then, one tires of trendy restaurants, generally in the suburbs, that vie with one another to introduce the most exotic lettuce variety, the most artfully decorated entrée, or the most dazzling Ron Rea interior. When the yearning for good old-fashioned grub in no-nonsense surroundings strikes, one could do worse than the nostalgia fix and culinary integrity presented at Maria's. ...

Maria's is the sort of place that Cher and Nicolas Cage — not Danny Aiello — would have frequented in Moonstruck. Earthy and authentic, it stands on Grand River Avenue as a dramatic response to those who say the neighborhoods of Detroit are dead.

Loui's makes the best deep-dish pizza in Detroit. I know those are fighting words among a legion of pizza lovers bitterly divided over the quality of their respective champions' square pies. But I dare any of the Buddy's, Shield's or whatever partisans to find a cozier venue to eat superior pies than in Loui's, a classic pizza parlor on Dequindre just north of Nine Mile Road.

Loui's has been winning awards and testimonials since it opened in 1977. Among notable patrons whose autographed glossies you can peruse as you wait for a table (limited reservations taken only for parties of 10 or more) are vintage Detroiters: the late Bob Talbert and John Kelly and Marilyn Turner, and Hollywood stars Mel Gibson and Dom DeLuise. ...

I hope ... that nothing changes among the colorful, all-female waitstaff, many of whom are in their second decade at Loui's. Typical is the exuberant Diane, who, placing her hand on your shoulder, may ask, "What can I get you, hon?" What else but the best deep dish in Detroit in near-perfect surroundings?

Although I love hanging out in restaurants, I also enjoy my day job teaching history. Only rarely can I combine both pursuits. Perhaps that's the reason I'm fond of the venerable Anchor Bar on Fort Street in Detroit. ... Predating Prohibition, this fabled institution is crammed full of vintage local political, media and sports photos and memorabilia, some of which must make the curators at the Detroit Historical Museum envious. ...

According to Leo [Derderian]'s son, Vaughn, who now runs the place, one of his father's earlier moves was precipitated by a conflict with Martin Hayden, the editor of the Detroit News. Angered by the fact that so many of his employees drank their breakfast, lunch and dinner at the nearby Anchor, and also because the legendary Doc Greene, his star columnist with whom he did not get along, was a silent partner in the bar, Hayden's News bought the building and began eviction proceedings.

Today, the Anchor no longer relies on journalists to get by — there are fewer of them thanks to the JOA, continuing downsizing and the fact that young journalists, including those at the Metro Times, don't drink like their predecessors. Today, aside from the police, politicians, hockey-goers and neighborhood types who still frequent the bar, casino workers have adopted the Anchor as their gritty home away from the glitz of their workplaces. ...

They all come to eat waxed-paper-wrapped burgers, sandwiches and bar food from polystyrene plates with plastic utensils. The most popular burger is the Avah, named after Vaughn's sister, a double-decker, loaded with ham, Swiss and American cheese ($5.50). Cooked impeccably to order, thick and juicy, it is still one of the better burgers in town. ....

Whatever the occasion, if you need a quality late-night burger and a history fix, the Anchor, which closes at 3 a.m., should be your destination. No other historical "museum" maintains such long hours.