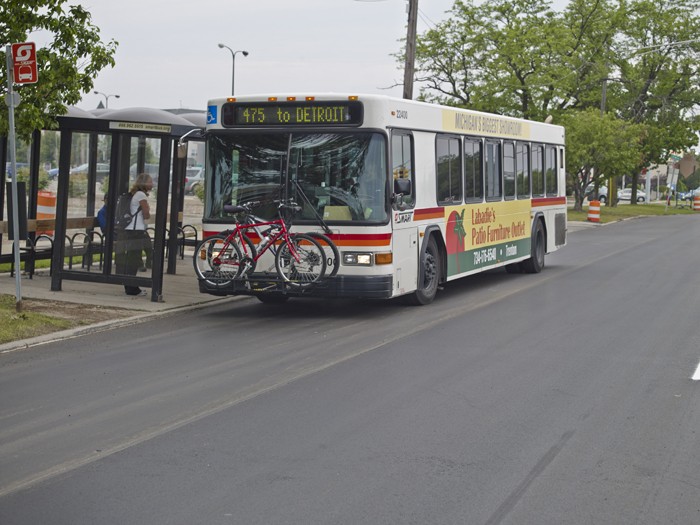 Local transit advocates know there’s a lot riding on the success of the Southeast Michigan Regional Transit Authority. Established in 2013, the agency has been widely viewed as the key to constructing an efficient regional public transportation system across metro Detroit. Unfortunately, the RTA has experienced a number of hiccups since its inception, something this rag has documented at length.

But the RTA will have a steeper hill to climb if the Suburban Mobility Authority for Regional Transportation, better known as SMART, doesn’t manage to pass a tax proposal across Wayne, Oakland, and Macomb counties in the Aug. 5 primary election. SMART officials say the authority needs the help to boost operation funding for the suburban bus system, which has taken a hit in recent years due to the decline in property values.

The Oakland County Board of Commissioners signed off on the proposal last week, meaning a 1-mill tax to support the bus system’s operations will go before voters in the tri-county region. The proposal would represent a .41-mill increase from the current 0.59 millage rate levied for SMART’s operations. That happens to be the lowest rate of the 10 bus systems in the state of Michigan, says John Hertel, SMART’s general manager. Grand Rapids’ bus system, for example, levies a 3-mill tax on residents to support its system (one mill property tax equals $1 for every $1,000 of taxable value).

And, he points out, “We are the largest system in the state, in [that] we serve as many people in square miles as the other nine do all put together.”

Since 2008, the bus system has lost almost $50 million in revenue. Hertel says more than 80 percent of its fleet needs replacement.

That’s the other reason that the system’s officials were driven to seek support from voters.

“The federal government says that 500,000 miles is the most you should be able to get out of these buses,” he explains, adding, “So … that’s what this money’s about, because the buses are on their last legs. Our maintenance costs have skyrocketed to keep them going. We’re in a situation where this is an absolute necessity.”

Homeowners in the tri-county region, if you’re still unsure how much this would cost you, let us try to explain: Under state statute, the property tax value of a home is 50 percent of the home’s market value.

Enough math. That’s the extent of the Hits crew’s capability with numbers anyway.

Now, whether a homeowner in Chesterfield Township realizes it, the SMART system transports more than 30,000 people to school, medical appointments, errands, and more on a daily basis. If anything, the passage of the ballot proposal in August could signal the region is finally ready to support a beefed-up transit initiative through the fledgling RTA, which is expected to ask voters to approve a tax to support that agency’s operations in 2016.

Hertel says there’s a chance SMART routes cut in recent years could be restored, “but the first thing that has to be done is to restore the fleet.” For instance, over the last few years, the system reduced service along Woodward Avenue into Detroit to where it only runs during peak hours. Depending on how SMART’s next round of labor negotiations turn out, “we might be able to restore some routes, but … there’s no way I’d be able to predict that with any accuracy.”

If the proposal fails at the ballot box, Hertel says they may go back to voters in the November general election.

“We don’t like to think that way, but if it fails, we would have to go back,” he says.

Why the sense of urgency?

“We’re literally going to not be able to operate if we don’t get a millage increase by the end of 2015,” Hertel says. “We’ll be done. … We can’t continue to operate at this rate, given our increase in maintenance costs.”