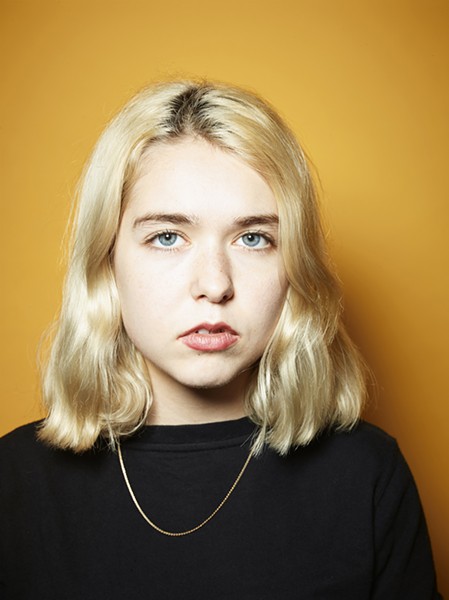 In the case of 19-year-old Lindsay Jordan of Snail Mail, she's still in the thick of it, but she also has a record deal and a sharpened self-awareness and, dare we say, an emotional intelligence most adults would love to be able to associate with their adolescence. And, yeah, her poetry is great and her haircut is cute. In so many ways, Jordan is an anomaly sans a shred of precociousness that often comes with the territory of being labeled by music critics as an "old soul."

Snail Mail, of course, is the Baltimore, Md., indie outfit Jordan formed when she was still in high school. When she was 15, the band released its EP, Habit, which gained momentum in DIY circles and earned Jordan's brand of teenage malaise an active following and, six months later, a record deal with Matador Records. Jordan writes angst without dismissing optimism, and lyrically she has embraced the banality of her coming-of-age narrative by pairing her message with delightfully drawled vocals. A balancing act that allows Jordan to sound sweet without coming off as elementary, and pained without feeling begrudged or spiteful, is one of many factors that makes Jordan's experiences resonate with anyone who was ever young once.

"Don't you like me for me?" she asks on "Pristine" from her forthcoming record Lush, "Is there any better feeling than coming clean?/ And I know myself and I'll never love anyone else."

When we chat with Jordan, she is preparing for her first headlining tour with a new guitarist who has only four days to learn the songs just a week away from the release of Snail Mail's debut LP. In conversation, Jordan talks at lightning speed, and on more than one occasion asks to redact a name of an ex-lover, laughing as she admits, "I'm still new to this."

Metro Times: The world is about to get a clearer idea of who you are as an artist next week, as you're a week away from the release of Lush. How do you feel?

Lindsay Jordan: It feels amazing. I've been sitting on a lot of these songs for a long time. I've been having to answer questions and tour around the EP, which I didn't feel represents how I feel as a songwriter. Just having to sort of speak to songs I wrote when I was 15. It just gets to be sort of hard to do and go back to that place. We've worked so hard and diligently on this record. I wrote it over the span of a year and a half and we recorded for six months. I'm so over the moon.

MT: Are you nervous to tour this material? It's sort of like your baby.

Jordan: I get very stressed during these times because I'm such a control freak. It is my baby. I care so much about the way it sounds live and after every show, I can't enjoy my night unless I feel that it was perfect. It just so happens that this tour feels so crucial because the record is about to come out. We're doing four record-release shows and we very rarely are the headliner. So, I'm like, "Guys, we got to get this right."

MT: Originally, you had written 30 songs for Lush but narrowed it down to just 10?

Jordan: I was just writing all the time. And half of them were trash because I wanted to be writing. It was like writing in a diary. Not all of it is publishable. Since I was writing all the time, I learned the value of stepping away from things. It got to the point where the songs that were keepers I would spend four months on each one of them. Just putting them through my editing process and making sure the songs were truly special to me.

MT: Now that you are headlining and you have an audience that is entirely yours, what type of pressure did you put on yourself between Habit and here?

Jordan: When I started writing Habit, I didn't have any idea that Snail Mail was going to be successful. I actually wrote "Heat Wave" (Lush) before we were like getting any kind of attention. I was really excited because I wanted to make an album to make something of my own and I was excited about the prospect of finishing something like that. Then I was trying to finish school and try to make all these decisions and hire people. I was initially really scared, and I didn't write for a really long time. It was never the right time and never the right feeling. I sort of was able to trick myself into writing songs that no one was ever going to hear again. I just needed to get back to that place and separate myself from that person making all these decisions and sort of having to be an adult and a vulnerable songwriter.

MT: Did you romanticize a career in music at an early age?

Jordan: I started music when I was 5 years old, and I never thought I would be able to do it for real. I kind of gave up hope when I was 13. This is not a job people do. I wanted to be a writer. I thought maybe I want to be an English teacher. I'm glad I'm not, because I don't think I have the patience. I thought I wanted to do journalism. But I noticed people were really connecting to what I was saying as Snail Mail and then it just blew up. I was about to apply to college, and right before the deadline, I stopped myself. I didn't want to half-ass school or music. Now I have people telling me how the music has done something for them. It feels romanticized, maybe, but right now it feels totally fresh and new.

MT: What's something that you wish people asked you instead of what it's like to be a woman in rock?

Jordan: I love that question. Thanks for asking that. I wish people would ask me about — whatever the fill-in-the-blanks would be for a dude.

MT: Right. That question wouldn't be asked at all because gender isn't a genre.

Jordan: Yeah, I don't know what the problem with understanding [that].

MT: I had read that at one point you formatted your set lists to replace names of songs with the names of women the songs were about. Have you found that women have reservations about getting in too deep with such a confessional songwriter? Are you?

Jordan: Maybe ask after Lush comes out! I haven't run into that yet but I get that vibe sometimes. Sometimes I feel that people want the song. Maybe that's worse. The songs are just vague enough that the people who the songs are about won't be able to recognize. Maybe like one or two. Songs are reflective of myself and a lot of them are [about] pulling things off, like me having to throw myself in this world and living with it. The songs jump in a lot of different directions. It's not about just one experience, you know? They all sort of grow and change with me.

MT: This early in the game, are you able to define success?

Jordan: Well, there are a couple of things early on that I've requested, and I would really like us to do this — it's, like, one thing I've been dreaming to do and we're doing it.

There's a lot of traveling we've been doing — feels sort of like a success and a big dream for me. There's stuff I really wanted to be able to say. And a lot of it is out already. And then there's some other stuff I can't quite say yet, but you'll know when you hear it.

But honestly being able to have the opportunity to make a record in a studio that I choose and with a producer that I choose, that felt — I don't think it constitutes success necessarily, but it felt really fulfilling to make the record.

MT: I feel like during this entire conversation, you've been smiling. Like, I can hear you smiling.

Jordan: Yeah, it's true. Ever since we started talking about the record release, I've been excited. I've never been this excited.

Snail Mail will perform with Bonny Doon at 7 p.m. Friday, June 15, at the Belt alley (between Broadway and Library Str.), Detroit; Admission is free.