Something’s happening out there — the rising tide of socialism 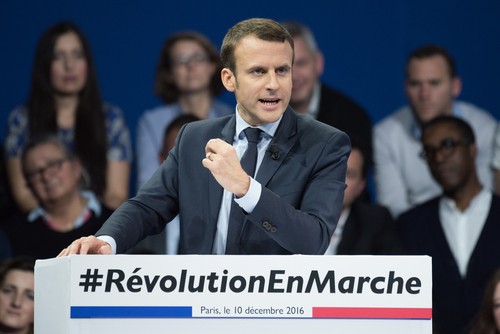 You could make a strong case that there isn't anything drearier these days than politics in America — that is, unless you're talking about politics in Michigan.

Know-nothing, right-wing zombies control everything on both the state and federal level. Increasingly, they scarcely even bother to conceal their contempt for the people. Nationally, that has meant strenuous efforts to screw millions out of health care in order to give huge tax cuts to multimillionaires and huge tax breaks to Big Pharma and other huge corporations.

Locally, our shabby provincial Republicans in Lansing spent most of last month haggling over how much to reduce pensions for teachers, as if they hadn't worked overtime for years to make teaching a less and less attractive profession.

You might think Democrats would be doing everything they could to wake up people to what's being done to them.

They do, to be sure, bleat a bit — possibly to impress what's left of the teachers' unions and encourage campaign donations.

But they aren't protesting in any fiery or imaginative way that has any potential to fire up outrage among the citizens who are being so cruelly used. You might think Democrats would be putting everything they could behind an effort to outlaw the outrageous gerrymandering that means they can never ever take back control of the state Senate, barring a revolution.

But they aren't. They are merely squabbling over the scraps they think they can win. You might think some would have the guts to denounce the criminals in their midst.

Nah. Nor are party leaders willing to suggest to congressmen like Sandy Levin (soon to be 86) or John Conyers, (88 and more out of it than Neptune's moons) that it might be sensible to make way for younger and more vigorous folks.

Our power elite in this country is about as frozen in stagnation and ultimately worthless as the Soviet Union was in the Brezhnev era back in 1982. That was an era historians now call the "time of stagnation." Naturally, Soviet historians don't use that term. That's because there is no more Soviet Union.

Hold that thought, kiddies. Nobody, and I mean nobody, thought in 1985 that we'd ever see that vast empire dissolve.

I know, because I interviewed many of the top Soviet experts in this country when they got a new leader then.

Nothing much will change, they said.

Seven years later, the Soviet Union was as dead as the passenger pigeon and the pterodactyl.

But something is happening in Europe, where I spent a few weeks last month. Last year, a new leader emerged in France with a new movement he started overnight.

"What doesn't work anymore is the party system," he told a British newspaper last year, in words that could have been used to describe a certain country called the USA.

He said that what was needed were far better ways to connect with people — and that a new alignment was needed.

Macron wanted to appeal to all those in favor of an open society, free trade, and connections across borders.

Politicians on both the left and right laughed at him. Then came this year's presidential elections. Macron got 66 percent.

One month ago, En Marche! didn't have a single seat in the French parliament, the National Assembly. They have about two-thirds of them now. Meanwhile, Macron has come off well in meetings with both Presidents Putin and Trump.

Across the English Channel, as I noted last week, the new left-wing Labour leader Jeremy Corbyn defied the polls and made massive gains in Britain's elections.

New polls now show Labour would win an election today. Suddenly, it doesn't seem like such an anomaly that Bernie Sanders ran so strongly last year, or that Elizabeth Warren may well be the Democratic Party's new national leader.

Naturally, most of the mainstream media still doesn't get it, though The New York Times may be starting to.

In recent a brilliant essay in that paper, "Why young voters love old socialists," 29-year-old Sarah Leonard, a senior editor at The Nation, notes that most major nations "used to have parties that at least pledged allegiance to workers."

That ended back in the 1990s, thanks in large part to people like Tony Blair in Great Britain and Bill Clinton here in America.

They sold the workers out. Now, as Leonard explains, "people my age ... are more in need of a robust leftist platform than ever. The post-Cold War capitalist order has failed us.

"Across Europe and the United States, millennials are worse off than their parents were and are too poor to start new families. In the United States, they are loaded with college debt ... and are engaged in precarious and non-unionized labor."

Frankly, the Trump phenomenon may have been partly caused by this, and represents one solution to the failure of the old order — the wrong one, one that blames minorities and immigrants for what's wrong with America today.

You'll likely see some of those poor deluded and hateful fools posting attacks on this column. But I think something politically may soon happen here that will leave creatures like Rick Snyder and the Clintons blinking in astonishment.

They won't get it; they can't. Some of the rest of us, especially those born in the 1980s or later, already do.

Maybe we really do need a king

For many years, I've felt that what America really needed was a monarchy. Actually, twin royal families, which would be installed depending on which party controlled the government in Washington.

Seriously — hear me out on this. Nobody in Great Britain gives much of a damn what the prime minister's home life is like. The leader of the Conservative Party in Scotland is a woman who is about to marry a woman. Nobody cares.

They have the royal family to obsess over. The royals have very little real power, but the nation is mesmerized over Charles and Dead Diana and Controversial Camilla and Randy Andy and the gorgeous young princesses and all the rest of them.

Queen Elizabeth II presides over the sacred, secular and insane as sort of a soothing mother of the empire.

Meanwhile, the politicians are left alone to run the government and are judged mainly by how they do at that.

Macron, the brilliant new French president, has also figured this out. Two years ago, he told a newspaper that his people hadn't really wanted to get rid of their king.

That left, he said, "an empty seat at the heart of political life." Ours, too. So I propose that we immediately amend the constitution to make the Trumps and the Clintons our competing royal families. This would have many benefits.

Best of all, if we do it the way Britain does, we'd specify that none of them could ever hold any real power, ever again.

You gotta admit that would be a win-win right there.