Soup of the gods 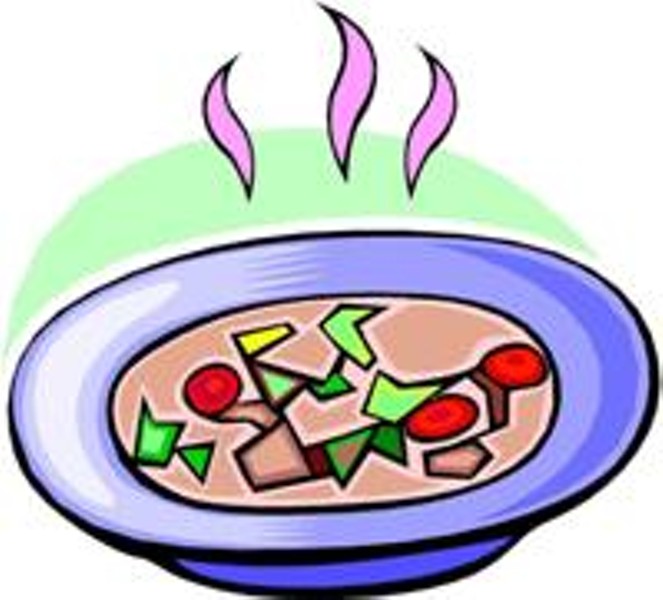 We all have favorite foods — vegetables, poultry, beef — and favorite cuisines — Chinese, Indian, Italian. We also have favorite dishes. I love a rich lasagna Bolognese, one of the ultimate comfort foods, constructed of fresh pasta strips layered with meaty red sauce, béchamel (a white cream sauce), parmigiano reggiano and perhaps a few fresh basil leaves strewn in the mix. Also high on my list is a dark-roux-based seafood gumbo, especially those prepared and served in Louisiana; a spicy-hot, hickory-smoked pulled pork sandwich topped with coleslaw served on plain soft white bread makes a memorable meal. Another winner for my palate is red snapper cooked in a slivered garlic sauce. There’s nothing like paella packed with pork (perhaps in the form of chorizo sausage), chicken, clams, shrimp, lobster, fish and cockles, along with vegetables, smoky red piquillo peppers and a saffron-infused broth, the richer the better. As the ingredients are added, their juices meld to give the rice base the flavor that makes this such an amazing treat. It is a rice dish, yes, but it is an injustice to refer to it as such.

I suppose my list of favorites changes with my mood and as my imagination recalls different times and different places.

But a standout in my long list of favorites is Chinese hot and sour soup. After years of eating the wonton soup that was served with every meal at every Chinese restaurant I ever visited (I found the other choice, egg-drop soup, inedible), I finally discovered hot and sour. And when I did, it blew me away. I’m not sure where I was, but it was the right place at the right time. Thankfully, hot and sour is now available at nearly every Chinese restaurant on the planet.

Said to have originated in the Szechuan or Hunan provinces, some American versions of hot and sour are much better than others. The best in my experience have been prepared to order, rather than left on the stove where the ingredients lose their crispness.

The dish derives its heat from pepper — white pepper, black pepper, hot chili oil and chili bean paste are the most common sources. The sour comes from vinegar. The contrast of the two defines our enjoyment or displeasure.

Most versions of hot and sour include common Chinese ingredients: pork, black Chinese mushrooms, wood ears or cloud ears (fungi that are dried and reconstituted in water), tiger lily flowers, bean curd, chicken stock, egg and one or more types of pepper and vinegar. Other additions include shrimp, cornstarch (to thicken the soup), crisp bamboo shoots, scallions and soy sauce. All versions I’ve tasted benefited from a bit of sesame oil, usually added at the end with a sprinkling of ground white pepper.

All of this combines to create a flavor impossible for me to describe — which is part of why I love it. Hot and sour is delicious and tastes unlike any other soup. It seems to be a dish best suited to cold weather, but it needn’t be relegated only to that time of year. Its flavor and texture are soothing and its spiciness will surely awaken your palate.

Reading tales by the author Andrew Vachss renews my passion for finding the perfect hot and sour soup. In several novels, Vachss writes about a character named Burke and his band of former gang members who, now out of prison, are dedicated to fighting evil and helping to protect women and children. These sort of modern-day Robin Hoods meet in all of Vachss’ books at Mama’s, a run-down, nondescript restaurant in New York’s Chinatown where Mama always serves her version of this famous dish.

I once met the author and could not resist, though I felt foolish doing so, asking if he had the recipe. “No,” Vachss replied. “That’s Mama’s.”

The two best versions that I have found in metro Detroit are served at Kim Toa in Warren and Dong Sing in Sterling Heights. Kim Toa, a sit-down restaurant, is an unpretentious neighborhood spot located on Ten Mile Road, two or three blocks east of Hoover. Its version of hot and sour is available only in a large bowl that serves four. I eat the appetizer dish myself as a meal — I can’t get enough of it. It takes about 10 minutes for the chef to make it, and it is worth the wait. Most of the ingredients are finely shredded, altering the normally crunchy texture of the dish. The flavor is, well, indescribable. Try it. You’ll thank me. Kim Toa also serves the best pork fried rice that I have found.

Dong Sing is a tiny carryout where Shao Yu and her family crank out the best traditional hot and sour soup anywhere. When you order, you’ll be asked what spice level you prefer. I had hot the first time — medium ever since. I love hot food. Ten years ago I could not have eaten some of the foods that I now consider medium-spicy. Most people’s tolerance level — make that enjoyment level — changes as we consume more pepper. The sour that makes one person pucker is barely noticeable to another. So, believe me, Dong Sing’s hot is hot.

But the broth is ethereal. All of the ingredients are combined in just the right proportions. It is perfection. I’ll keep searching, but I don’t expect to find a better version, ever. Try to convince Shao Yu to open a sit-down restaurant. Then you won’t have to eat the soup in your car.

Jeff Broder is a chowhound for Metro Times. Send comments to [email protected]