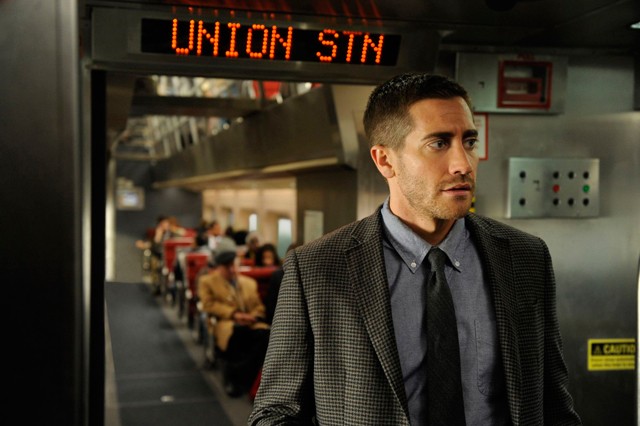 Welcome to the age of the mash-up, where ideas and concepts are wedged together into artistic Frankenstein concoctions. While movies — and all art forms for that matter — have always borrowed liberally from one another, the last few years have seen a particularly aggressive recycling and repurposing of creative content. As a result, Hollywood has come down with an acute case of sequelitis (there will be 27 sequels this year) and adaptaphilia. Movies based on comic books, novels and other movies have become the industry's stock in trade, while even "originally" conceived films have begun to feel awfully familiar.

Which is why you shouldn't be surprised if you experience a little déjà vu while watching Duncan Jones' Source Code. You may even swear that you've already seen this just-released sci-fi actioner. And you're probably right. Smash together Groundhog Day and 12 Monkeys, or Quantum Leap and Denzel Washington's Deja Vu, and the cinematic memories will begin to click into place.

Jake Gyllenhaal stars as Colter Stevens, a military helicopter pilot in Afghanistan who suddenly wakens to find himself in the body of schoolteacher Sean Fentress. Now a passenger on a Chicago commuter train, he's seated across from an attractive and perky young woman (Michelle Monaghan) who seems to know him. But before he can figure out how he got there — blam! — the train explodes and everyone, including Colter, dies. Except he doesn't. Instead he wakes up inside the cramped cockpit of a strange metallic capsule. There, a woman (Vera Farmiga) informs him that he's part of an experimental program that allows him to be placed inside another person's identity for the last eight minutes of their life. He has been transported onto a train that was attacked and destroyed earlier in the day. By repeatedly reliving Fentress' last eight minutes, government scientists are hoping Colter will discover clues to the bomber's identity and help prevent an imminent nuclear attack.

Over and over, the narrative repeats as Colter skips through parallel-track universes in search of the bomb and its maker. But things become complicated as he starts to develop feelings for Monaghan, a woman who's destined to die — who is, in fact, already dead. This jeopardizes Colter's repeat-play mission, as he struggles to alter the events of the past and save the passengers on the train.

Slick, fleet-footed and cleverly plotted (the repetitive scenes evolve as Gyllenhaal applies knowledge from previous encounters), Source Code is a popcorn flick seasoned with just enough smarts and heart to keep us engaged and invested.

Director Jones, whose debut was 2009's terrific Moon, smartly sidesteps his movie's tortuous, illogical conceits and instead focuses on Colter's more human concerns. He also returns to themes he explored in his last movie, namely dueling identities and the exploitation of humans by institutional forces. While Source Code can hardly be considered profound, it does inject an ethical debate on free will versus determinism into its high-concept plotline. Had Ben Ripley's script provided a stronger ending and better attention to the mechanics of its space-time logic, Jones might have produced a cinematic gem. Instead, Source Code never aims higher than a better-than-average diversion that doesn't insult your intelligence.

That said, the cast smoothes out many of the film's jarring bumps. Gyllenhaal brings a befuddled and heroic sincerity to Colter, making him instantly sympathetic. He's well-matched with Monaghan's charming but underwritten love-interest. Miraculously, Farmiga fashions real nuance from her threadbare character, giving the movie some unexpected moral heft. It's only Jeffrey Wright who stumbles, as a cartoonishly amoral government scientist.

Source Code is refreshingly modest in its execution and approach. Except for a few explosions, the effects are minimal and the story's turns are well-executed. Better yet, the movie actually has a few interesting ideas and isn't afraid to explore them. You may not remember it all that well after viewing, but you certainly won't regret the two hours spent watching it.