Nostalgia & disappointment — The singing convinces — it's the script that's off-key 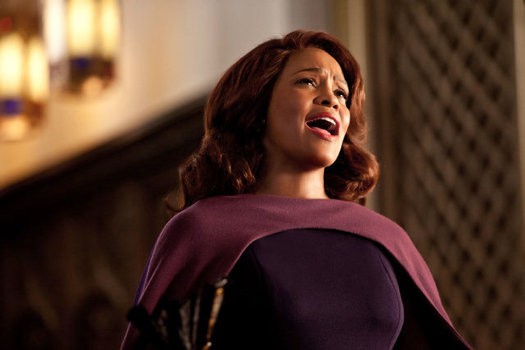 The film Sparkle evokes two flavors of Motown nostalgia. There's nostalgia for the bygone days of '60s musical dominance, when the city's streets overflowed with excitement and fresh talent. Then there's nostalgia for a more recent, vanished era when major motion pictures were actually filmed in town.

Today's hardscrabble Detroit bears little resemblance to its mid-20th century heyday, but the production found a handful of local spots that still exude their vintage flair: Cliff Bell's, Lafayette Coney Island and Baker's Keyboard Lounge among the still-intact relics of yesteryear. It's fun to see these joints on the big screen, even if their insertion into the storyline won't really sell locals on sometimes less-than-convincing period details.

The flick itself is a soapy backstage showbiz melodrama, a cheesy remake of an even cheesier '70s yarn about an inner-city girl group struggling for a big break. It's filled with glitz, intrigue, drug abuse and lots of hair pulling and slapping, and it's a guilty pleasure to be sure, though not on the level of Dreamgirls, and surely not Lady Sings the Blues. The music is pretty good, but the script is pretty bad.

American Idol winner Jordin Sparks appropriately enough plays "Sparkle," the shy, studious, but talented middle daughter in a family singing group, anchored by her dynamic, sultry older sister Tammy (Carmen Ejogo) whom everyone just calls "Sister." Sparkle is the brains of the outfit, writing the tunes and trying to hold things together, but when she finally gets to belt out a few tunes solo, she brings down the house.

If only there were more authenticity in the film's other key, and now sadly noteworthy performance, that of Whitney Houston as the girls' domineering, judgmental, Bible-thumping mother.

I know it's tacky to speak ill of the dead, but let's be honest, Whitney was never a particularly stellar actress, and her wobbly, overwrought and occasionally clueless work is a bummer to build a legacy on. Houston does get to belt out one tune, a thundering ballad backed by a rousing gospel choir, and in that moment we see the sort of talent that can't be faked, and that today's slick, market-tested pop products would be wise to emulate. Just as long as they get counseling when they need it — and maybe some acting lessons too.