For years now, alert motorists on Detroit's west side have been treated to an unusual sight. They have posted photos of what they've seen on social networking and even sent them to our office, in surprise and in puzzlement, but mostly in delight. What they have witnessed is a young rider on a Western saddle guiding his horse down West Seven Mile Road, past the gas stations and fast food restaurants, a sight that seems so out of place in the car-centric Motor City as to be remarkable.

Late this summer, the horseman finally calls and invites us to watch him ride. On a recent morning, we drive over to a house near the intersection of West Seven Mile Road and the Lodge Freeway. There we finally connect with 21-year-old Speed Miller, the "Greenfield Gaucho" we'd seen photographed so widely. He speaks with us while he carefully guides his 12-year-old Tennessee walking horse named Frisk out of a stock trailer, carefully grooming the animal, which eyes us contentedly.

Miller credits his love of horses to his grandfather, the elderly man who watches from the porch for a moment before allowing his grandson to handle the reporter and photographer. The elder has owned a 44-acre farm outside of Belleville for generations, and that's where the young rider began his love affair with horses.

That fascination began with his mother, who found encouragement from Miller's grandfather when she climbed into the saddle decades ago. "My mom, she started doing barrel racing. When she got pregnant with me she stopped riding, then I started riding as I got older, and it just became me and him," Miller says, motioning toward his grandfather.

Though born in Detroit, Miller spent some of his first few years living with his mother on the farm. They moved around a bit, as he attended elementary school in Detroit, middle school in Southfield, and high school in Romulus, but the farm remained home base.

"I was there all the time," Miller says. "I was raised by my mom, but I spent every day with my grandad. My mom was always at work, so I'd be chilling with my grandad. I guess you could say that I was raised by both in a sense. I think me and my grandad are a little bit closer though, 'cause I spent most of my days with him. He taught me pretty much everything I know about these horses." 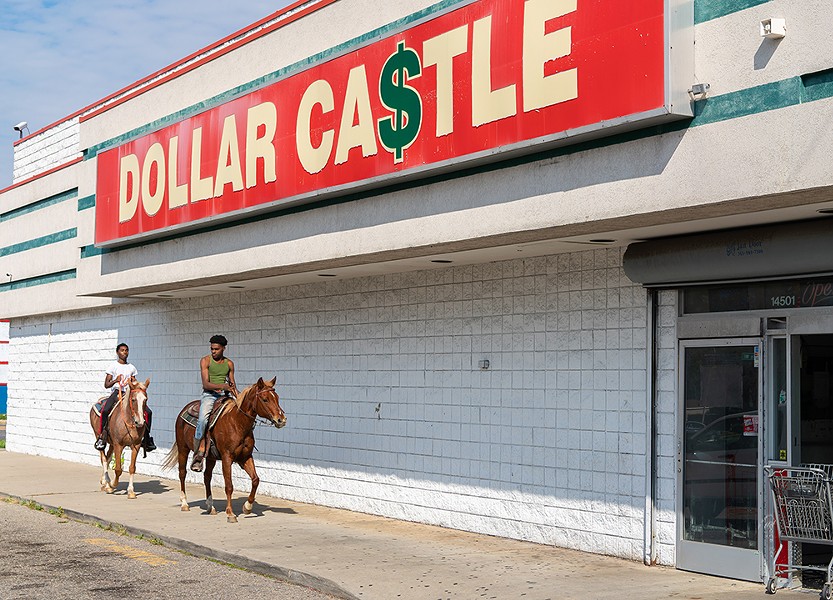 In fact, Miller says that his grandfather has passed the farm down to him, and now he is engaged in the business of buying, training, and selling horses, especially for buyers who want horses with the sort of calm demeanor that suits younger riders. "I go down to Ohio and Indiana, pick up horses, train them up for a little bit then I resell them. Buying and selling horses is what feeds these horses." The young man points out one obvious exception: Frisk, the animal he carefully grooms on the sidewalk. "He's my personal horse," he says. "He's not for sale. He's my baby."

What inspired Miller to bring his animals into the city? Originally, he says, it was for training. He trains the animals on the farm, and then brings them into the city, with all its distractions, to give them a final polish of discipline. "I ride them out in the country, then I condition them in Detroit," he says, brushing the animal's coat. "Out there it's more calm, out here it's crazy. He's getting experienced to more stuff, that's why I like having him out here."

"Anybody can ride this horse," he adds. "That's the way I want them when I sell them. Me and you can get in the car, go across the freeway, go to McDonald's, get something to drink, come back, and I guarantee you he's still standing here. He's not going to move, man. That's what you want."

But when Miller began riding in the city and saw how young Detroiters connected with the animals, he realized he could offer them the same joy he found in horses.

"The kids were actually fascinated," he says, "so I started bringing them out more, letting the kids touch them. Then, as I got more comfortable with the horse, I started putting the kids on the horse, just showing them a little something different. So I bring them down about twice a week. It's kind of like a learning experience for both the children and the horse, in my eyes."

The visits have also become an additional source of income, with horse rides, carriage rides, and church events. "That's normally what I do to generate funds," he says. "My main mission, if I could, would probably be to get the horses into the city, and start doing horseback riding lessons for the underprivileged kids in rougher neighborhoods. I feel like the city can be a better place than it is, but everyone needs to come together. If I can bring the horse out to a clean-up event, maybe I can get even more people to help do the clean-up. It's just different stuff."

Miller says he shows youngsters how to handle horses with care. "I try to teach them the most basic common sense stuff, like don't stand behind the horse, don't run up to the horse," he says. "It's common when you see something that you've never seen, you want to go up to it because it's cool, but I just don't want nobody to get hurt."

With a laugh he adds, "It's not even the kids, I still got to teach the adults. Like, trying to honk your horn going 100 miles per hour, and yelling 'Dude, let me drive past this horse!' — all that crazy stuff."

He says that Detroit police don't give him any trouble. They seem just as delighted to see him as everybody else does.

"I'm pretty cool with most of the officers around here," he says. "We stop, take selfies and everything with them. It's pretty cool."

We can't help but ask Miller if he thinks there's a future for literal horse-power in the city. After all, it has been only a century since they pulled carts down main streets.

‘When I get on the horse, everything else really don’t matter. I can ride down these streets in the toughest neighborhood. It really just don’t matter when I’m on the horse.’ tweet this

"Honestly, I think it could play a greater role in the city," he says, "just due to all the abandoned fields that we have around here. I honestly believe that it would help the environment as a whole, a lot of the foolishness would slow down because the neighborhood would have something to do, something to look forward to. If you wake up tomorrow and you don't have much to do or a purpose in life or nothing to look forward to, that's not really helping nobody out, but if you got these horses out here somewhere, they can ride or something to get their minds off of this, or just help them escape for a little bit, that would still make a difference in a person's life. A big dramatic difference. I've got friends that I've had come out to the farm, and they're going through stuff at home. I'll be like, 'Come out and ride with me,' and when they come out there, man, they just forget about it. We go out on the trails and they just feel so peaceful. I can't put it in words. You have to experience what I'm talking about."

This isn't the first talk we've heard of horses in the city. In fact, a couple years ago, reporting on neighborhood watchdog Jonathan Pommerville, we'd looked into the question of whether Brightmoor's bombed-out blocks might be turned over to different land uses, such as animal husbandry. We had even talked to the city's District 1 manager for Brightmoor, Stephanie Young, who said a local group had completed a door-to-door survey and found that a majority of residents approved of the idea. Young had told us, "To their own surprise, people were interested in horses! They were thinking about rabbits and chickens and the occasional goat, and there were people interested in horse stables and dressage training! They had no idea they'd get that far."

In fact, in a coincidence so far-fetched as to seem like a contrivance, we see Pommerville himself grinning at us, having pulled his battered truck up to the small crowd the horse has attracted. He gets out of his rig to chat with Miller, and shares some of his stickers with the young horseman, who adorns his stock trailer with one. It's one of those moments when Detroit feels like the smallest big city in the country.

As cars pull over to watch and as people get out to record the scene with their cell phones, Miller seems just a bit more focused on the horse, preparing to get riding again.

"This is just what I do and truly what I love," he says. "Me, personally, I'm 21, and I figure I can pretty well make it halfway there off these horses. I've tried many jobs. I've tried all that, but it's not for me. Somebody telling me what to do for 12 hours a day is just not going to do it for me. I make more money with my horses. I'm not really a people person. I like horses. They communicate with me better, I can communicate with the horse in different ways."

"I've seen so much stuff throughout my life, I think my safe space be with the horses. When I get on the horse, everything else really don't matter. I can ride down these streets in the toughest neighborhood. It really just don't matter when I'm on the horse. It really clears my mind. That's another reason I like being out here. Honestly, man, it's just like... this keeps me out of trouble."

It all begins to make sense.

The urban rider finds his solace in the saddle, and both he and his horses challenge and fortify their equanimity among the rubbernecking pedestrians and horn-pounding motorists of the city. Speed Miller feels wonder and freedom on his rides through the west side, and sharing that with young people has only given him even more happiness.