The most recognizable face you don’t know in Hollywood. 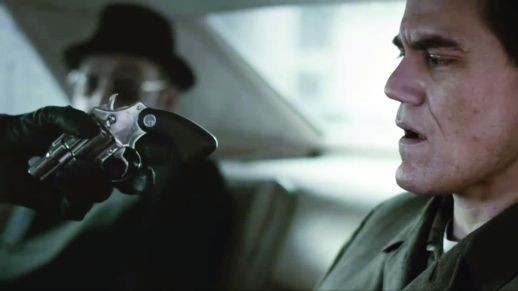 Michael Shannon is everywhere — and yet most folks can’t put a name to the face. There’s a good reason for that. Shannon is one of those Hollywood actors who is so skilled at assuming new and different screen personas that it’s hard to pin down his “type.” He’s tall, imposing at times, and expertly bottles up the darker emotional impulses of his more lethal characters. In Boardwalk Empire he plays the brooding, morally twisted Prohibition agent Nelson Van Alden. In last fall’s Premium Rush, he frothed as an explosively corrupt cop. And if you’re a fan of Funny or Die it was hard to miss his murderously unhinged reading of Delta Gamma gal Rebecca Martinson’s infamously foul-mouthed email to her sorority sisters.

That instinct for comedy and showmanship was on display early in his screen acting career. Shannon turned a bit part in Groundhog Day — he’s the guy who jumps with joy when Bill Murray gives him WrestleMania tickets — into a memorable laugh. And his turn as rock legend Kim Fowley in The Runaways was perfectly flamboyant.

But Shannon also radiates everyman decency. In Sam Mendes’ Revolutionary Road, he earned an Oscar nomination playing Kathy Bates’ bitterly observant son. In Jeff Nichols’ Take Shelter, he delivered (in this writer’s opinion) the best performance of 2012 as a family man struggling with the onset of mental illness. And, hands down, his portrayal of doomed addict was the only reason to watch Machine Gun Preacher. He’s an actor who can shoulder emotional scars with precise and understated grace.

This summer, Shannon adds two more off-kilter characters to his rogues’ gallery of high-profile performances. The biggest is as Superman’s nemesis, General Zod, in Zack Snyder’s Man of Steel. Next week, however, audiences can see him in Ariel Vromen’s The Iceman as Richard Kuklinski, the real-life New Jersey hit man who successfully hid his crimes from his loving suburban family. His story was made famous in a pair of HBO documentaries.

Metro Times: Richard Kuklinski is a really contained guy. Watching those HBO documentaries it’s clear he only lets out what he wants to let out. What’s attractive about playing a character like that?

Michael Shannon:Wow. Geez, I don’t know. I really appreciate his stillness. For me, Kuklinski was a person who was dealing with the same fundamental question his whole life: How can I live a normal life as royally damaged as I am? I think he was aware of the fact that he was a monster. He knew he was a monster and yet he didn’t want that to be true. He wanted to have a family, have a wife and kids. He wanted to be normal but his wiring was messed up. He almost pulled it off, which is the strange thing. He almost managed to have it both ways.

MT: I remember something Kuklinski said in the HBO documentary that really struck me. When asked about his mother all he would answer was, “My mother was cancer.” I’m surprised the movie makes nothing of that background.

Shannon: I don’t think any major sleuthing is required to figure out what that’s about. Kuklinski probably had some of the worst parents on Earth. They both seemed to be genuinely demonic type people.

MT: You’ve played a fair number of dark characters. How do you portray them without judging who they are?

Shannon: I can’t necessarily say that I don’t judge them. Honestly, it wasn’t like making The Iceman was an enjoyable experience. It’s not like I showed up every day with bells and whistles and said, “Give me that gun, I can’t wait to go shoot somebody!” It was just as creepy and frightening and weird as it was for anybody else. But at the end of the day we make these movies in an effort to try and understand things that, on the surface, just don’t make any sense to us. If you want to get at that knowledge and not have the whole enterprise just be a waste of time, you have to try to understand why he did what he did.

MT: I was chatting with a fellow critic that I would be interviewing you and he said, “He’s such a great character actor.” It’s not a phrase I like very much — all actors play characters — but I get what he meant. How do you feel about be considered a “character actor”?

Shannon: If I interpret it correctly, it’s meant to be a compliment. I have no qualms with that. You know the other category, I guess, is the leading man, where you’re just always kind of who you are and that the movie just falls into place around you. You know, you just show up and be charming or handsome. So, yeah, I guess I would prefer the character actor thing.

MT: Is it something you’re conscious of when you’re looking at potential projects? “Oh, this is different, this’ll be a challenge.”

Shannon: I’m not stunty about the whole thing. I’ve never tried to show off, like, “You’ll never believe, I played this person! You’ll never recognize me in a million years!” I’m not Lon Chaney with my suitcase full of mustaches. Although I kind of felt like him in Iceman. I’m more interested in the stories than the character. I like good stories and especially stories that seem to be relevant somehow to what people are really experiencing in the world at large. Most of the stuff I do I’m able to fabricate some collation between the two. Not all the time.

The idea of acting being something people should be impressed by … I find that distasteful. At the end of the day acting to me is like the service industry, which is a reason actors are waiters a lot of the time. We are serving everybody. We are serving the writers. We are serving the directors. We are serving the audience. I get some small percentage of credit for creating what you’re seeing but mostly because I showed up every day and walked in front of the camera. I never like to lose sight of that. If you’re in movie that’s good and people enjoy watching it — there are so many people who are responsible for that other than you.

MT: OK, we need to talk about Man of Steel. Was there ever a point in your career where you wondered when you’d get to play a character that gets turned into an action figure?

Shannon: Jesus. I never thought that when I was playing with me Star Wars action figures that “One day I’ll be Greedo or Hammerhead.” They were my favorites.

MT: I was a big Hammerhead fan too.

Shannon: Yeah, he was like a melted chocolate bar. I mean where is his brain? I’ve said this before: When I was a kid I was not a huge cinephile. I saw some of the big movies — obviously Star Wars and Superman — but it wasn’t like a huge part of my life. I went to the movies very infrequently and was not dreaming of being an actor or anything. I wouldn’t have been surprised if I had gone my entire career without being in a giant comic book movie. But in retrospect I’m incredibly glad I had the experience. First of all, the artists I got to work with on the movie, regardless of what it is or what it’s about, were incredible. Particularly Zack Snyder, who I think is a genius. And it was fun. I got to play.

MT: It must have been the opposite of playing Kuklinski.

Shannon: Yeah, but not without gravity or consequence. If anything, Zack and Chris Nolan and David Goyer are trying to insert some weight to the story so they don’t simply wash over you and then you forget about them five seconds after you leave.

MT: It must be interesting to be involved in a film that harks back to those few films you actually saw as a kid. After all, Terence Stamp made General Zod a pretty inconic movie character.

Shannon: He pretty much nailed it. There’s not too much to be said. The only hope I had filling his shoes was to completely ignore what he did and try to go in a different direction, because his performance can’t be improved on. We decided that Zod was not a villain. He’s not a stone-cold assassin or killer. He’s a general who’s trying to save his planet and his people. He’s actually not a terrible person, he’s just very passionate about what he believes in.

MT: I’ve heard you’re a huge Thelonious Monk fan. How did you develop an appreciation for his music, which is not always easy?

Shannon: I was living with my dad, I was 16 years old and he had the CD Monk’s Music. It was Monk sitting in a little red wheelbarrow, he’s got that little hat on and glasses and it kind of reached out to me. And the second song on the CD was a version of “Well You Needn’t.” The first time I heard that it was kind of a religious experience. I mean, you’ve got John Coltrane and Coleman Hawkins, and both their solos are amazing. I can still remember them. I would recommend to anyone on Earth to go get Monk’s Music.

MT: You came out of the Chicago Theater scene. Do you miss it?

Shannon: I miss it so much that I’m going to be there this summer to do the play Simpatico by Sam Shepard at Red Orchid. I think we open July 8, and should play through the summer and, if I can swing it, September.