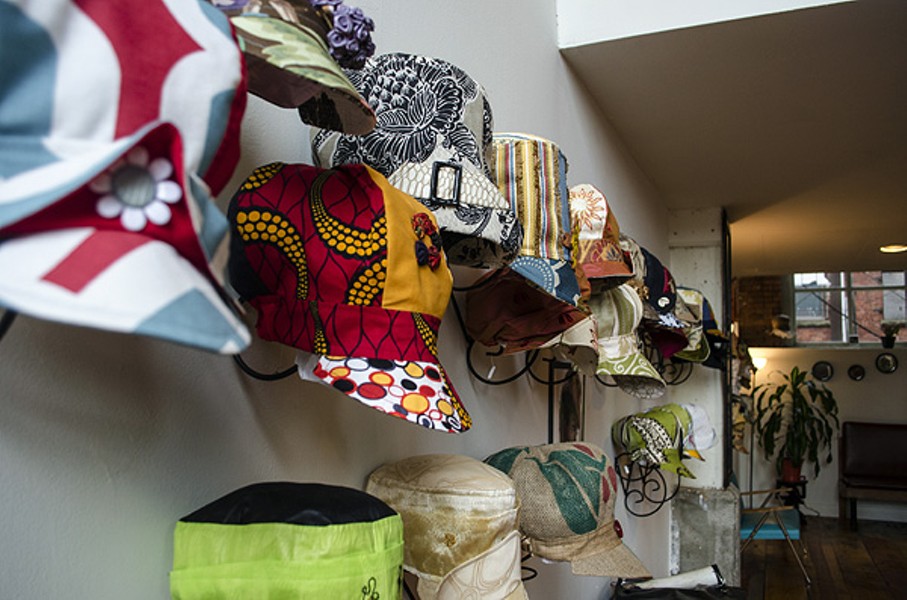 Things began organically for husband-and-wife team Tyrone and Stephanie Dickey. Stephanie was wearing her hair in dreadlocks and couldn't find hats to fit over them, so she started making her own. After that Tyrone says she couldn't walk down the street without someone stopping to ask her where she'd bought her unique topper. Soon, the pair were inspired to start a hat-making business.

At the time, the couple lived in New York. Tyrone would peddle the hats to salons in Harlem, and it wasn't long before they caught on. In 1992 they started a business with another partner, and since then they've sold their hats to customers around the world. Local celebrities like Amp Fiddler have even purchased their goods.

"We might get orders from London or Germany or Brussels," says Tyrone. "Whether someone has locks or just a large head, these hats expand out to pretty much fit everyone. We've just kind of cornered the market."

But after nearly 20 years in business in the Big Apple, Tyrone says rent was too high to continue sustaining the company. So, five years ago, the couple moved to Detroit. They've seen their business thrive, Stef-n-Ty, here.

"It's really different for us because we've lived in eight cities in the U.S.," says Tyrone. "We sell all over the world. Every year I see a growth in my business and I can say within the last five years that we've been here, it's been growing ever since."

Stephanie and Tyrone peddle their hats, along with similarly unique clothing, inside their shop on Iron Street in Detroit. The little store also regularly features the work of local artists. Along with a host of other local makers and crafters, the pair also set up a booth on Sundays at Eastern Market, where patrons can try on their brightly colored and patterned caps. Fans can also see them at big events like Jazz Fest and Concert of Colors.