The difficulty in defining 1967 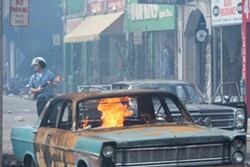 Anyone who thinks the tumult of Detroit's summer of 1967 — or the aftermath — is simple or easy to sort out is simply wrong.

The one thing easily agreed upon is that there was violence. What that violence meant is where the divergence emerges. The last Stir It Up column asked the question, "Why are we still obsessed with 1967?" It got a lot of response from internet readers.

"We're obsessed because it's wrongly and simplistically become identified with Detroit's transition from city to Third World villages," wrote Gary Zirulnik on Facebook. "Racists define it as the point of transition from white to black control. Many falsely remember it as the start of 'white flight,' which I recall as being well underway on the northwest side."

That's a good point, although I wouldn't call people who see it as a transition "racists." But there are people who posited that it was the beginning of the city's decline. Detroit's population began declining in the early 1950s and has steadily continued on that route since then. It dropped by about 180,000 from 1950 to 1960. We lost 140,000 manufacturing jobs from 1947 to 1963, when Big Three carmakers still didn't take the Japanese companies as a serious threat. So all those trends were solidly in place well before 1967.

Also, the complicity of many business interests spurred white flight on. Notably the real estate industry, which had a standard practice of scaring the shit out of white homeowners to get them to move. They would actually pay black women to walk around white neighborhoods with baby carriages so they could call white folks to tell them they better move before they lost the value of their homes.

Home ownership is touted by many as the best investment people can make and the cornerstone of most families' economic welfare. When you scare them by saying that they are going to lose their top investment, you can create a lot of fear — and scared people do extreme things. Add to that the highway system that was built in the 1960s enabling that trend, and you find more pieces to the puzzle.

A respondent on the Metro Times website, disqus_KeMsCyMCgm, pointed out another factor that has plagued the city. "What is true then was there were businesses, like the hardware store on Livernois near Seven Mile, that was torched by the owner to ease his exit from the city," they wrote. "There is also a high number of homes [whose] asking prices couldn't be [met], that ended up as torched houses; or cars with out-of-city ownership that [were] dumped and burned within the city limits."

I'm pretty sure the place on Livernois near the Avenue of Fashion was a paint store where the CVS is now located. It was the only place anywhere near my home that I saw was burned. I don't know anything about how that happened, but the phenomenon of property owners burning their own property to collect the insurance was a real part of all that for decades.

I witnessed this around 1990 when I lived in the Brightmoor neighborhood. Across the street from me there were vacant lots where the houses had burned down, so I could see the rear of houses on the next street. Looking over one day, I noticed a big brand new pickup truck in the yard of one of those houses. Two white guys came out of the house and drove off. A couple of minutes later, smoke started pouring out of the house. I called the fire department. After they put out the fire I told a fireman that I saw the people who lit the fire. He didn't want to be bothered about it.

Actually, the reason those empty lots were there is because my white neighbor, who spent most of his days sitting in front of his house drinking beer, burned them down. He burned the first down because some crack dealers had taken it over. Later he burned the other two houses when they became empty as precautions so they wouldn't become crack houses. It's amazing what you can hear from your neighbors when they sit outside drinking with their friends.

No, I'm not saying that white people burned down the city. My basic point this week and in my last column is that this stuff has been ongoing for a long time, and from a lot of different sources. For instance, how long did it take to get super-rich guy Matty Moroun to clean up the area and secure the old Michigan Central train station building? Now think about absentee owners of properties across the city who cooled their heels for decades waiting for their property values to go up. It's pretty tempting to not bother about upkeep and taxes unless forced to; and I have to admit the city wasn't very good about that. Look at the giant Packard Plant, possibly Detroit's biggest eyesore. That's not because somebody was running around burning houses.

And then there's the race card.

Geoffrey Jacques wrote on Facebook: "One important factor in the racial conflicts of (southeast Michigan) that has been far too little noted was that, in one sense, they were neither uniquely northern nor urban conflicts, but were actually southern conflicts carried to the north, as a large portion of the working and middle classes, both black and white, were actually southerners who had migrated to the city over the previous half-century."

Well that's a perspective your average person doesn't put into the equation. Especially when automakers specifically played black southern workers against union organizing a couple of decades earlier. Was 1967 part of a drama that has been played over and over? I think so. I don't think that racism was hands down the only inducement to leave (remember that home values thing), but racial tension made it easier.

Race was among the most important issues of the 1960s, along with the war in Vietnam and hippies. It witnessed the culmination of the civil rights movement and the emergence of the black power movement. There were more than 750 riots from 1964 to 1971.

As MT respondent Rebecca Eatmon bluntly claimed: "[It] was a riot plain and simple. Property was burned and looted and some lost their lives."

Well there were elements of a riot involved, but when you look at more than 750 uprisings across the nation, something much deeper was going on.

Jacques addressed that in his post: "The life of Detroit and its neighboring communities has been ... fundamentally bound up with the questions of democracy, its essence, character, and practice."

That's the reason I think 1967 resounds so strongly in our minds. It was part of a decade when people called into question who we are as a nation, and judging from what we're struggling with from Detroit to Capitol Hill, most of that has not been settled yet.

Related Why are we still obsessed with 1967?

Why are we still obsessed with 1967?
By Larry Gabriel
Stir It Up