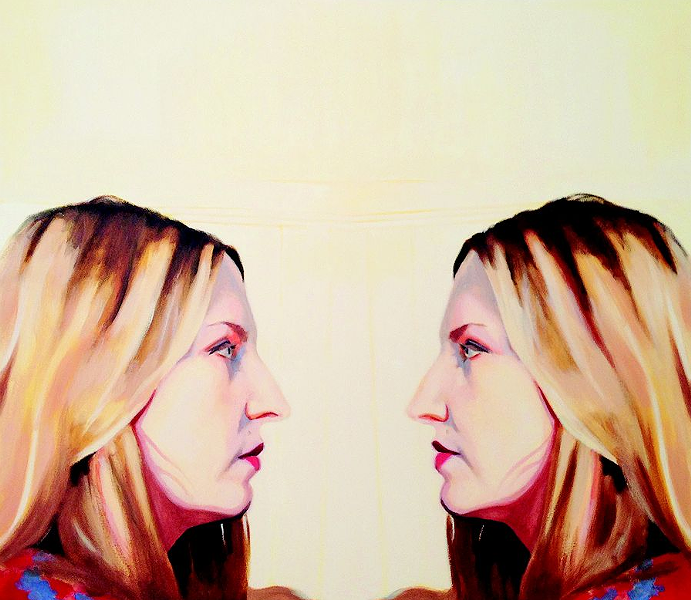 Artist Kristin Beaver admits that her upcoming show, Treasure, is a bit different from how she usually works. "This is a weird show for me," she says over tea in her studio. "I usually spend a year or longer getting ready, and, um, I haven't."

Lately, Beaver's been out of the country, having completed a residency in a town called Otranto in the south of Italy earlier this year. "When I went to the residency everybody said, 'You're going to find an Italian guy,'" she says. "I said, 'No, I'm not. This isn't a movie.'" Beaver, it turns out, did in fact wind up finding an Italian guy. "I don't speak Italian very well so far," she admits with a laugh. "I'm probably at a five-year old level."

Beaver says she spent the residency in a studio in a castle — "basically like having my own little monk cell," she says. In some ways, it wasn't too different from how she usually works — she says she has a tendency to get "hermity" when she paints. Her studio here is in a former candy store in Hamtramck, with the storefront serving as a space to paint and build canvases, while she lives in the back. "My landlords used to live down the street," she says. "They bought it only to rent to artists because they wanted somebody cool on their block."

Beaver made a name for herself in town for her fun, figurative style, in which she often had her friends pose for her. She says lately she's been painting instead from old family photos, as well as inevitably incorporating "Italian stuff" into her paintings. She typically works much larger (some of her older paintings in her studio go all the way to her ceiling), but this show will feature much smaller works.

"This show is much more mysterious, I would say, and esoteric compared to the other work," she says. "A lot of it is more zoomed-in glimpses and crops." Beaver has chosen the name Treasure for the name of the collection.

"I love the complexity of the word," she says. "It could either be a verb, to treasure something. It can also mean to keep a secret. It can be a term of endearment for somebody. The paintings themselves are treasure, too."

She says when she first started painting, she would work from direct observation. "It seemed sort of primitive, actually sitting with one of your friends and putting in that many hours with them," she says. "But when when I moved here, I didn't know anybody! So I started painting from photographs."

Beaver arrived in 2001 from rural Illinois, where she had completed her undergraduate studies at Western Illinois University. ("You know how Illinois has that curve? It's right in the middle of that. It's all corn," she says. "I hated it there.") She came to Wayne State to pursue her Masters because two of her professors at home were from Detroit. "I heard all about it," she says. "We used to listen to Iggy Pop in painting class."

Now, Beaver says she used photographs as more than just substitute for a model. She also says she doesn't use them to make her paintings more realistic — in fact, she says it has the opposite effect. "I love what happens in photographs, the mistakes that happen, and the strangeness that happens when you print it out," she says. "Somebody's hair could come out as just one flat color. Edges get blurred, and these depths of field are created."

Beaver says she used to love to paint from Polaroids. "When you look at a Polaroid, there's a nostalgia that's immediately there because the color becomes more muted and toned-down," she says. "It looks like something's that 's been faded for years."

She points to a series of black lines on an older painting — the aluminum siding of a house in the background. From far away the lines look black, but up close they are actually overlapping red and blue bands. "It creates this 3D, off-register thing," she says of her source photo. "That's the magic that I wouldn't see with my own naked eye."

Beaver admits that painters working from photography "has been the argument of the century" in the art world. She says she uses it only if she feels it will add to her image-making process, rather than slavishly re-creating the work that a machine has already done.

"There are certain times when a photograph is so fantastic that it doesn't need to be painted," she says. "Sometimes there's just something magical that won't be translated through paint, though. There's other times where I look at a photo and I think that painting it will make it so much more fabulous because you can take liberties."

It doesn't always work out, though. "Occasionally I have destroyed paintings because the photo is still way better than the painting," she laughs.

Beaver says it's a challenge that forces her to loosen up and find her own style. "There was a point where I was really striving for realism, and I just think that's really boring now," she says. "It needs to be a transcendent experience. I used to be very entranced by large scale work. Now I'm just interested in making beautiful little treasures. That's where it's coming from," she says.

Treasure will be Beaver's last show before she takes off to live in Italy again for a while, and says she's actually looking forward to living the rural life again. "I've been living on absolute high alert, as we all do in Detroit," she says. "To live in the country is so seductive to me right now."

She also points out that now is the first time she hasn't been back to school for her entire life — she got a gig teaching immediately after graduating. "I'm making a serious life change, and I'm totally ready for it," she says. "I love Detroit, but I came here to go to graduate school, and I graduated in 2004. I never thought I would stick around, but then I fell in love with everybody here." — mt