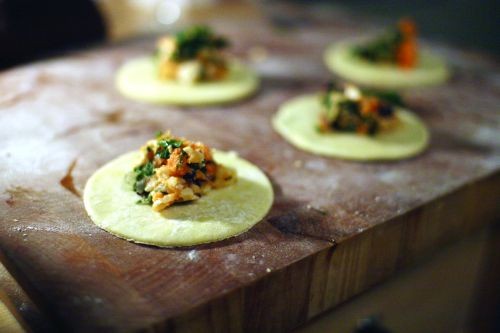 Popportunity — The Detroit pop-up known as Stuffed is back for another round of deliciousness. This time it’s at MOCAD, which has hosted several pop-ups of late, and it should be a tasty affair in tiny packages. From pierogi to samosas to empanadas, Sarah Burger is thoroughly fascinated by both the similarities and differences of stuffed foods across cultures and geographic regions.” This installment will be no exception, with Burger taking her inspiration from traditional Chinese dim sum, with both meat and vegetarian options. Burger’s pop-up will be joined by her friends from Cook Lola Cook, who will serve pupusas, an El Salvadoran street-food masa cake stuffed with either cheese, meat or vegetables and grilled to perfection. Join the fun from 11 a.m. to 2 p.m. on Sunday, July 21, at the Museum of Contemporary Art Detroit, 4454 Woodward Ave., Detroit; 313-832-6622; for more details, see facebook.com/stuffedfoods.

More at the market — Detroit’s Eastern Market has a new cool little café. It’s part of the art gallery, performance space and café, Trinosophes. Offering American and Indian fare at affordable prices (as in, nothing costs more than $10), its menu has everything from cookies to curries. Hearty options include the Moroccan lamb tagine and a vegetable-based Thai coconut curry. Although the rotating menu changes on a daily basis, some recurring favorites include assorted tapas, a roasted beet salad with goat cheese, and eggs Benedict with a side of potatoes. Lighter choices include vegan cookies, oatmeal-walnut cookies, vanilla bean pound cakes, coconut-lime cupcakes, as well as tart pies that use local, organic ingredients.It also serves coffee from Anthology (local) and Just Coffee (imported from Wisconsin), as well as extremely fragrant hot or cold teas and Mexican Coke, the original formula for Coca-Cola, which uses sugarcane instead of high-fructose corn syrup. Have a taste at 1464 Gratiot Ave., Detroit; 313-737-6696; open 8 a.m.-4 p.m. and 6-10 p.m. Monday-Friday, 8 a.m.-4 p.m. Saturdays, and irregularly on Sundays.

Indian Spice — Buzz is building about Ann Arbor’s newest Indian restaurant. Cardamom, which opened in April, is already making a name for itself with an affordably priced menu that offers a fusion of modern and traditional dishes from all over the subcontinent. In other words, this is more than just chicken curry — although chicken curry there is. Expect more unusual dishes, such as Angaarey shrimp (we hear “angaarey” is Indian for “fiery”) or Bengali fish curry, grilled masala salmon, Bapu’s goat chops, Chettinad lamb and even a Tandoori-roasted vegetable salad. Cardamom is at 1739 Plymouth Rd., Ann Arbor; 734-662-2877; cardamoma2.com; open for lunch 11 a.m.-3 p.m. Tuesday-Sunday; open for dinner 5 p.m.-10 p.m. Tuesday-Thursday and Sunday, 5-10:30 p.m. Friday-Saturday; closed Mondays.