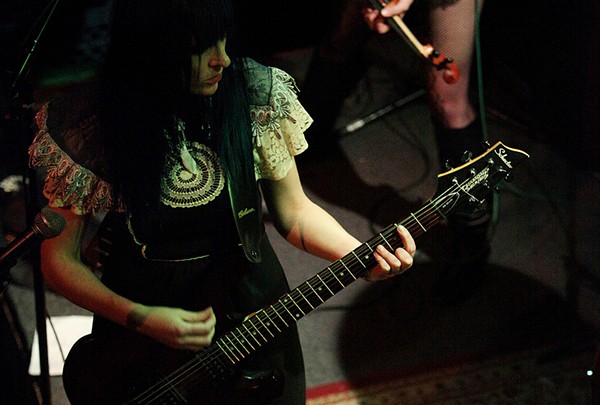 In darkness there is light. In expression there is power. In agony there is deafening release. The experimental sludge doom of Salt Lake City's SubRosa combines all of these things in its haunting, harrowing music, which is decidedly metal, but the kind that leaves room for supple sounds to augment the heaviness.

This is due in no small part to the eerie ambience of not one but two violins that buoy the crushing volume of the other instruments. This supernatural contrast is what gives SubRosa their singular effervescence within the swampy world of doom they call home.

SubRosa is Rebecca Vernon (guitar, vocals), Sarah Pendleton (violin, vocals), Kim Pack (violin, vocals), Andy Patterson (drums), and Kory Quist (bass). The band's most recent release is last year's Subdued: Live At Roadburn 2017, its first live album. Recorded at the international heavy music festival in Roadburn, this set presents another side of their brutal music, offering a different take on emotional intensity with stripped down versions of their songs.

2016's For This We Fought the Battle of Ages is the band's most recent studio album, a moving, layered work that is operatic in concept if not literal sound. Arguably the band's most ambitious record yet, the album is based on the 1920s dystopian Russian novel We by Yevgeny Zamyatin. Sociopolitical issues are a common lyrical thread in SubRosa's music, so it makes perfect sense that the band would find such stark inspiration in a novel that describes a world of conformity in a totalitarian state under mass surveillance.

SubRosa was actually intending to go on a break this year – but then "stoner doom" emissaries Sleep invited them on tour, which is what brings the band to Detroit this week. In anticipation of what is sure to be the kind of show felt in the depth of one's bones for days to come, we spoke with bandleader, guitarist, and vocalist Rebecca Vernon about the happy accident that inspired the band's particular sound, the differences between the power of music and that of words, and more.

Metro Times: The most recent album was inspired by the novel We. Can you tell us where that came from?

Rebecca Vernon: Sci-fi, horror, and post-apocalyptic literature are my favorite genres. I've loved them ever since I was 10, when I was reading Helen Hoke and Goosebumps, then onto Stephen King and on from there. Whenever my family would go to video stores I'd get horror movies. I was just always into it. So I read We on a friend's recommendation a couple years ago. As soon as I read it, I felt like this book encapsulates so much of the philosophies I've had my whole life. It states them so clearly and so much better than I ever could have and so I thought while I was reading it that I've got to write the next album about this book. So we did.

MT: The violins are so important to what gives SubRosa that special sorrowful sound. Can you tell us a little bit about how the violins ended up in this brutal music?

Vernon: Well, that's what I asked myself when the band first started. I wanted to start a really heavy band for three years or so, just very brutal. Sarah [Pendleton] and I were very good friends and she was learning violin at the time and wanted to be in the band. I was like, "Well... OK, I guess," you know, kind of worried that it would water down the brutality of the band. Of course it turned out to be the best accident that befell us because the violins evoke the hidden emotion behind the riffs and are able to bring this whole layer that wouldn't be there otherwise.

MT: Can you describe the evolution of SubRosa?

Vernon: We started out just barely knowing what we were doing, following our instincts and making what sounded like heavy folk music with violin. Then we got exposed to more and more underground metal and doom metal. Our tastes started changing, morphing, and transforming. We started taking on more influences and also realizing that the sky's the limit in the underground metal world. You can really do whatever you want. You start to hear the doom metal elements on our second album, Strega. We really entered a second phase with No Help for the Mighty Ones and More Constant than the Gods, [our next two albums]. For This We Fought the Battle of Ages is an evolution of that change, elaborating on it further and progressing it as far as we could take it. I don't know what the next step is, musically, for SubRosa. We took [that sound] as far as we could on Battle. We'll see where we go from here.

MT: What is something from outside of music that has an influence on it for you?

Vernon: Literature in general, not just We. I've always loved reading more than anything. I love language, I love words. I take a lot of care with the lyrics. They're very, very important to me, how words communicate different feelings, evoke different images and emotions. Sometimes the lyrics can seem really simple but that can betray the hours and hours I put into selecting just those exact words for the part.

Vernon: Exactly. I was just thinking about the power of language and lyrics and not saying something directly but saying it more obliquely. The right word can convey seven different layers of meaning instead of one.

MT: You've said "Music is the most powerful art form." Can you elaborate on that?

Vernon: All art is really powerful. Art changes the world, everything from visual art to film and dance and opera and literature. But there's something about music that goes into the hidden chambers of emotions, that bypasses language. Visual art can do that as well but for some reason I just feel that music can do what no other art form can. For the most part, people can pick up on the unspoken things that someone is trying to say through music. It's incredible. I believe that music is the closest to the language of the soul, the language of emotions rendered sonically. It's like the emotions are brought into the physical world and expressed physically. That's the best way I know how to describe it.

MT: It adds another dimension to feeling.

Vernon: It can make you feel things you have never felt before. Literature is also amazing but sometimes language can be so complicated because there are symbols. Words are symbols for physical things and music just bypasses all that. It doesn't have to go through the step of being a symbol first. It just goes straight through all that.