Like watching a first-person shooter stuck in God Mode 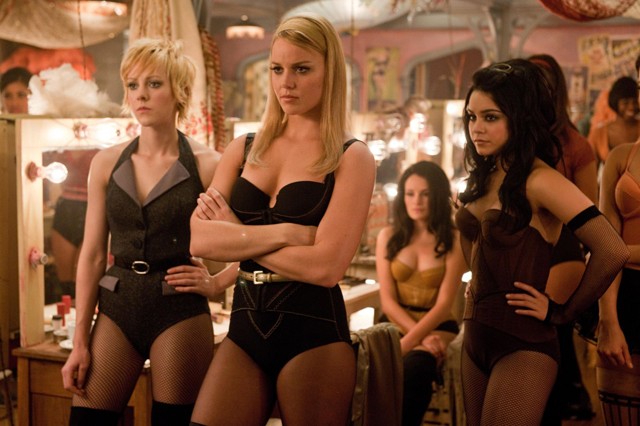 Spastic, bombastic, and incoherent, Zach Snyder's Sucker Punch is a baroque, highly polished chunk of pop culture vomit. A nonsensical mash-up of Shutter Island, The Lord of the Rings, I, Robot and Kill Bill, it doesn't even have the decency to have fun with its cartoonish obsessions, instead delivering a somber, moody, metafictional melodrama that that thinks it's about female empowerment but instead has all the philosophical heft of Maxim Magazine.

Set in the late '50s and early '60s, the movie follows Baby Doll (Emily Browning), who is locked away in a grimy, gothic mental institution by her stepdad (Gerard Plunkett). Eager to cash in on his stepdaughter's inheritance, he bribes the corrupt supervisor Blue (Oscar Isaac) into having her lobotomized. With only five days until the doctor shows up, Baby Doll finds refuge in a rec room with a stage, known as the "theater." It's there that she decides to enter the theater of her mind (oooh, deep), where the film's central narrative unfolds in an alternate universe.

Here, Baby Doll has actually been sent to an orphanage for runaway strippers, where a misogynist mobster pimps out nubile young girls to grotesquely lecherous clients. Each girl is required to perform a signature dance and that, supposedly, is where Baby Doll discovers her true power, converting elaborate fantasies into routines that fill men with uncontrollable lust. Empowered by special effects-laden daydreams, she enlists a quartet of similarly sexualized gals (including Jena Malone and Abbie Cornish) in a daring escape plan.

Sucker Punch's plot is, essentially, the last 10 minutes of Terry Gilliam's Brazil — had it been conceived by a deliriously hormonal teenage boy. Like a spastic wet dream, Snyder regurgitates fanboy fetishes to illustrate Baby Doll's reveries — without wit, innovation or subtext. Dragons, orcs, robots, chaingun-totting samurai and steampunk Nazis go toe-to-toe with heavily armed jail-bait draped in costumes straight off the racks of Frederick's of Hollywood. Using his signature quick zooms, slow-motion freezes and computerized tableaus, Snyder treats us to a cascade of dazzling digital eye-candy. Too bad each masturbatory episode of hyper-stylized violence and apocalyptic mayhem is inconsequential, lacking even the simplest internal drama or stakes. It's like watching a first-person shooter stuck in God Mode.

In the ultimate act of hubris, Snyder's opening scenes actually riff on Orson Welles' Citizen Kane. Cluttered with chiaroscuro lighting and low angle shots, he announces that his endless referencing of other, better directors (from David Lynch to Peter Jackson to the Wachowski Brothers to Quentin Tarantino) is wholly intentional. Little does Snyder realize, his blatant pilfering debases rather than pays homage to Hollywood's imagination. Though I'm certain he thought it cool and clever to fill Sucker Punch's soundtrack with modern remakes of "Sweet Dreams (Are Made Of This)," "White Rabbit" and "Love Is the Drug," the choice only highlights his complete lack of originality.

Sucker Punch's posters read: "You Will Be Unprepared." But the truth is, if you've seen the trailer or watched any of the flicks I mentioned above, you've pretty much already seen the movie.