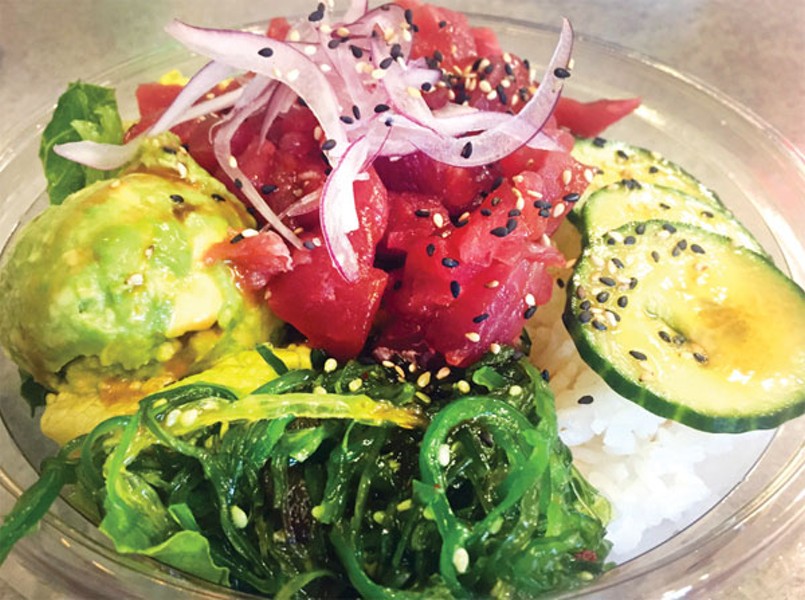 A lot of people know by now that the word "sushi" actually refers to the rice, not the fish. At a cooking demonstration at the Japanese consulate a few years ago (sponsored by Kikkoman), they showed us how to toss rice vinegar, with a little sugar in it, with hot, just-cooked rice. The rice was fanned as it cooled to achieve just the right degree of separation and stickiness.

That's sushi — and then you can combine it with raw fish to make nigiri or a maki roll.

Or the latest craze here on the mainland is to do it the Hawaiian way: Top a heap of warm sushi rice with cubes of cool fish and some sauce or seasonings to make a poke bowl.

I saw a picture online of a grocery-store display in Hawaii, of cubed fish for poke (po-keh). Tray after tray of pre-cut red ahi tuna for the busy cook — they treat this stuff like it isn't even precious.

I love this place. Every bite had me making happy noises. I'd love it even more if the dishware weren't plastic, but it's meant to be ultra-casual. It's just that the food is good enough for a serious sit-down with a tablecloth and a glass of Sauvignon Blanc. The fast-food vibe pushes me unconsciously to shovel it in, when what I want is to slowly savor every silky raw fish bite.

U.S. born-Chantharangsy, who is ethnically Chinese with a Laotian name, serves a traditional Hawaiian dish influenced by Japan. He learned the arts of sushi and poke during a two-year stint in L.A. He gets his fish from True World Foods, which specializes in Asian seafood, and serves tuna that is hand-line-caught instead of net caught.

My favorite of the four bowls I tried was the tuna, which comes with a startling amount of the ruby-red stuff, as fresh and satiny as a rose petal, red onion slivers, cuke slices dusted with black sesame seeds, romaine, seaweed salad, and for richness, avocado smashed to just the right consistency (the only addition to the avocado is a bit of lemon juice and salt; it's not guacamole). Each ingredient goes with every other ingredient.

The shrimp tempura bowl, with eel sauce, batters sweet potato, too, and what an ethereal batter it is. For texture, some of the batter is cooked on its own to form little Rice Krispies-like morsels, called "crunch."

The peachy-pink salmon, just as sleek as the tuna, is augmented with neon-orange masago and spicy mayo. The pretend-crab is shredded and paired with mango and much more. Every combination makes perfect sense, a mix that is both segregated and integrated with temperatures and textures — slippery, crunchy, creamy, crisp, starchy, fleshy — and of entries on the food pyramid — vegetables, carbs, and protein. For your dairy, see below.

If you don't want to accept Chantharangsy's expertise on the five bowls offered, you can mix and match your own. All use real sushi rice, a medium grain so that it's tackier, he says.

Don't forget edamame: here the bright-green, nearly iridescent beans are warm and dusted with big flakes of salt. Two challenges: not to spoil your dinner by eating the whole bowl, and to keep the popped beans from shooting across the room.

For dessert, Chantharangsy delights in mixing his own soft-serve ice cream. He uses a blend of products that are 6 percent and 12 percent butterfat, so it's denser than some soft serve, and it's quite creamy. He adds flavors from extracts that change weekly: taro, black sesame, matcha, honeydew melon. The machine swirls two flavors together; I liked peanut-butterish sesame despite its gray color, with green tea, slightly astringent. The $4.50 serving is enough for two. If your ice cream eating has been more along the lines of chocolate and caramel, these Asian flavors are a revelation.

Sushi Coup actually has a second non-dessert specialty: Korean chicken wings. They're brined overnight, then fried for five minutes. Taking the wings off the heat allows the fat and moisture to render off, and then they're fried again. That's why the outside is so crisp, with a coating bumpier than your mom's. They come with a perfect soy-ginger dipping sauce.

It's the combination of the two dishes, the bowls and the chicken, that gave the place its name: First it was Sushi plus Coop, as in chicken coop. And then, the thought process went, why not "coup" as in coup d'état — a sushi takeover. Regime change.

When it's this good, I'll back the revolutionaries of the deconstructed sushi roll all the way.