Take me to the Revoir

Jason Revoir creates some of the most fascinating noise in the city. 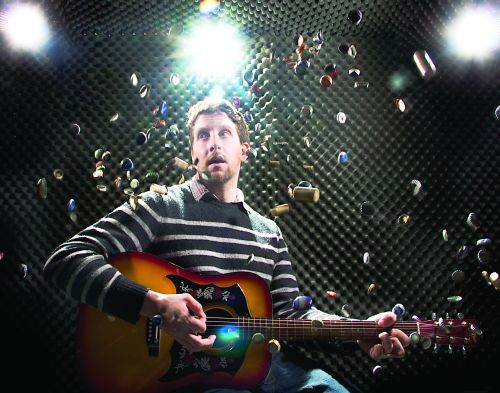 Jason Revoir is not the kind of man who takes genre definitions seriously. This bloke has crossed more boundaries than a hand-wandering pervert on a crowded bus, simply because he’s not content to sit back and be told what he should sound like. As a result, he creates some of the most fascinating noise in the city.

His current project, the self-titled Revoir, is generally an electronica affair; he previously played in rock bands. While he has brought forth the indie sensibility and some of the harsh vibe from that world, he has pretty much swapped codes. A Dylan fan might yell, “Judas,” but these are different times. Rules are meant to be broken. Go forth, young man — and cross-pollinate.

“I started making music when I was a teenager – I started playing in bands and stuff like that,” Revoir says. “I was about 15 years old. I heard Nirvana and fell in love with it, and wanted to get a guitar and be exactly like Nirvana. That was my first introduction to rock ’n’ roll because I didn’t know much about rock back then. I’m 33 now, so I discovered Nirvana in between Nevermind and In Utero.”

Nothing unusual about that; many, many people who were impressionable teens during that Seattle band’s heyday decided, then and there, to start a band. But when did Revoir go from plaid-adorned grunge fanatic to electro-guru?

“A couple of years ago,” he says. “I always incorporated electronic stuff in my music. I was in a band called Cougar the Tiger back in 2008, and that was more rock-based, but we still used a lot of electronic elements. I went totally to the electronic stuff with my first album, This is the Album. I cut out all rock elements and tried to go way to the electronic side. I think I just change my mind all the time. I can never stick with one thing for very long. I guess I was out of the mood to make rock.”

Revoir, who describes his sound as being a modern take on Depeche Mode, admits that he’d love to have his band play the Movement Festival (which is taking place during this interview). “I’d love to do that,” he says. “I saw Phantasmagoria was playing, and Deastro. I’ve done a couple of shows with Phantasmagoria and I like those guys a lot. My wife really got me into that [electronica] stuff. We’ve been together nine years now. I knew a little bit, but she introduced me to a couple of the Detroit-based artists. I probably would have never discovered Matthew Dear if it wasn’t for her and I think he’s real good. I used to really dig Moby back in the late ’90s. I saw him in ’97 at the 89X Fest; that kind of stuff I’ve always dug – Prodigy and Chemical Brothers. One of the acts that blew me away was Crystal Castles, which led to me wanting to make my first electronic album, or at least move further in that direction.”

Perhaps surprisingly, Revoir says he feels like he fits in with the current Detroit music scene more now, as a solo artist, than he did when he was in a band. “I’ve met a lot of people over the past three years and made a lot of friends,” he says. “People seem to like me and ask me to play shows. I didn’t feel so much like I fit in when I was in Cougar the Tiger, because I felt more like I was watching everything from the outside. Since I made the switch, I feel like it brought me a little more inside. People know who I am now and I have a lot of people that I looked up to asking me to do shows and stuff.”

Speaking of the Detroit scene, Revoir was delighted when he finally got to play Dally in the Alley in 2011. “That was exciting – I’ve always wanted to do that and that was the first time,” he says. “I’ve been going since I can remember, so that was pretty cool. Just recently we played this May Days Festival thing. There wasn’t a ton of people there, but it was enjoyable because it felt very much like there was camaraderie with the other bands. At the end, we had this extended jam with Electric Fire Babies, and that made me feel like part of a community. I really enjoy that kind of a feeling — being a part of something. Even though it wasn’t a huge crowd, it was exciting for me because I felt a connection with my fellow musicians.”

Revoir also surprised many when a split single surfaced last year with the controversy-courting Jesus Chainsaw Massacre. A friendship, says Revoir, has blossomed. “I’ve become pretty good friends with JR, the man behind Jesus Chainsaw,” he says. “I think he noticed my stuff and appreciated it. He and I played a show last night together. We have a side project that we call Lo Lo Lo-Hanz. It’s more improvisational and chaotic. It’s still electronic-based. I had always heard of Jesus Chainsaw Massacre. It was very weird the way I covered that song. I went on the SoundCloud page and made a comment about how I want to cover this song. About five minutes later, JR contacted me and asked if I’d really want to cover the song. I said yeah, it’d be fun, and that was the first time I met him, a couple of years ago. We became friends after that and now we play together.”

This weekend, Revoir plays a show at the New Dodge in Ham-town with Electric Corpse and the Grand Rapids electro-pop crew, Alexis. “I’m looking forward to that because my partner/producer [John] Dion just fell in love with Alexis,” says Revoir. “We played Blowout and he went and saw Alexis, and was talking about them for the next week. They’re his new favorite Michigan band. Matthew Dallas [of Electric Corpse] contacted me and asked if I wanted to play with Alexis, which was a weird coincidence. I’m looking forward to it; it should be a fun show.”

An album will follow soon. “We’re working on a bunch of songs which are nearly finished,” Revoir says. “I just need to work on them some more. That’s going to be a new album —– I’m not sure when it’ll be finished, but it’ll be at least half-a-year. We’re thinking about calling it Venom. I’m not sure if it’ll be another EP or a full-length album this time. I was kinda hoping to try to put some instrumental electronic stuff in between the songs in order to extend it into a full-length sort of thing. Also, we developed some Matthew Dear songs after playing as him for Detroit X Detroit. I’d like to put those three songs out for free on the Internet. We did half the work anyway, just getting ready for the gig. We put together the instrumental tracks, so all I need to do is put vocal over them. We’re planning on doing that.”

And after that? “I’d like to get on Dally again, and maybe Arts Beats and Eats — the summer festival shows and stuff,” Revoir says. “I’d like to talk to Alexis, swap shows and play Grand Rapids. I’d like to play Ann Arbor and get outside of Detroit a little bit.”