Think of it as Rapunzel 2.0, an updated tale of a beautiful young princess 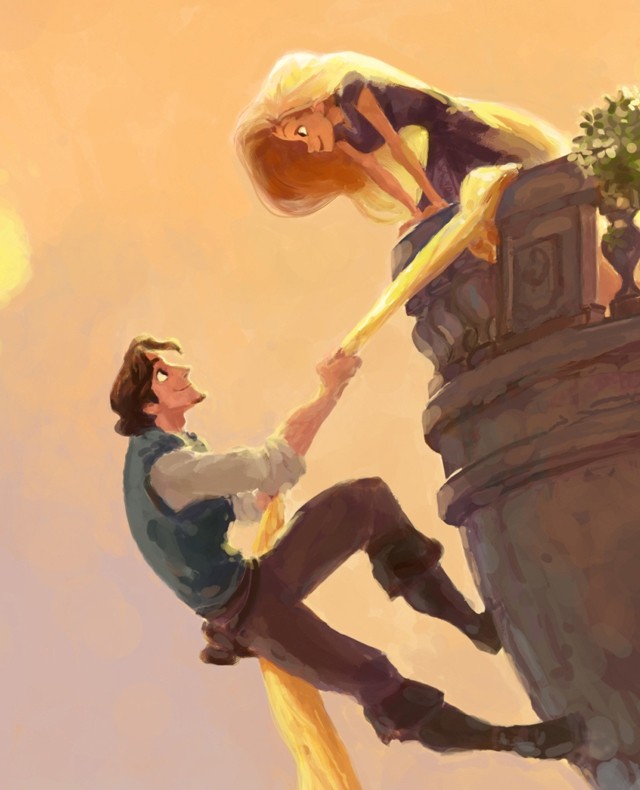 Here's something that's like old-school Disney sporting some snarky new shoes. And that ain't necessarily a bad thing. Especially when you've got Pixar's John Lassiter overseeing the fitting. The scripting is clever (especially the second half), the animation is gorgeous, and the sentiments ... well, we're talking Disney here. But while moms who typically spit and sputter at the thought of yet another Barbie princess story should take heart that Tangled displays some gender parity for a change, there's no getting around how Disney is cribbing from itself.
Alan Menken (Beauty & The Beast, The Little Mermaid, etc.) composed Tangled's octave-scaling musical numbers as the trademarked saucer-eyed princess falls for a square-jawed hero, and cutesy-pie animal sidekicks provide comic-relief while helping the damsel in question achieve self-actualization ... which eventually leads, of course, to the blissful shackles of hetero matrimony. Frankly, our heroine deserves more.

Think of it as Rapunzel 2.0, an upgraded and updated tale of a beautiful young princess (voiced by Mandy Moore) whose flaxen hair has the ability to heal the sick and restore youth to the elderly. It's that last trait that compels wicked old Mother Gothel (Tony-winning Broadway star Donna Murphy) to kidnap the newly born Rapunzel and imprison her in a hidden tower, where she's raised as a frightened and dependent daughter. But like the long line of Disney heroines who came before her, Rapunzel grows up and begins to yearn for the outside world. Enter Flynn Rider (Zachary Levi), a rakish and vainglorious thief who's being pursued by the king's guards. Taking refuge in the tower, he ends up blackmailed into becoming Rapunzel's escort into the outside world. After 18 years of isolation, the long-lost princess journeys outside and discovers it's not half as dangerous as her "mother" warned. Unfortunately, Gothel isn't about to let her personal fountain of youth ride off into the sunset.

What would have been a by-the-book, hand-drawn Disney flick 10 years ago has become a 3-D CGI enhanced holiday tent pole ... marketed to adolescent boys. Yes, it's Rapunzel's story (no matter what Ryder's opening voiceover claims), but Hollywood slavishly pegs its box office success to the predilections of teenage males. Which explains why all of Tangled'scommercials have focused almost exclusively on Flynn. The last thing the laddies want to watch is a kissy-faced fairy tale about a princess with too-long hair. The disappointing box office returns on last year's Princess and the Frog made clear that dudes rule. This boy-centric mindset is nothing new for Pixar, which after 11 films has yet to create a female character of significance.

Luckily, Tangled maintains its traditional classic fairy tale trappings, putting the focus squarely on girly-girl Rapunzel. Eschewing the smirky sarcasm of most Dreamworks' projects (I'm looking at you, Shrek), the film struggles a bit with its setup, but once Rapunzel hits the road it becomes a rambunctious concoction of humor, action and eye-popping visuals. From the Pythonesque thugs who belt out a heartfelt song about their dreams to Rapunzel's deliriously schizophrenic reaction to the outside world to a royal steed who reconsiders his mission, Tangled really comes into its own once we leave the tower. Better still, itcaptures the strange and manipulative tug of war that often occurs in mother-daughter relationships.

Still, the villain isn't all that villainous, the hero isn't all that heroic, and the references to other Disney classics only serve to remind audiences that Tangled's plot twists are mostly a second helping of well-worn sentiment. As lush, well-paced and clever as it is, it's not new enough to be innovative, not self-reflective enough to be meta (Disney already did that with Enchanted) and not old-time enough to be classic. It may earn a bazillion dollars but Tangled can't help but live up to its title.