The yearning of adolescence as high school comes on 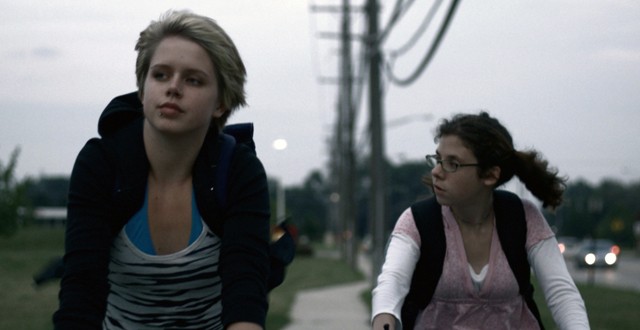 The Myth of the American Sleepover

Remember the impossible and wonderful eternity of teenage summers? Caught on the cusp of adulthood, days filled with torturous yearning, joyous possibility, and so much empty time, neighborhoods became endless landscapes, too small in their familiarity and, sometimes, far too open in their emotional experiences. It was a time when everyone was experimenting with attitudes, postures and poses, hoping to define some sense of self.

As an adult reflecting back on that time, it's hard to imagine ever having that kind of freedom and hopefulness again. Writer-director David Robert Mitchell's low-budget ode to the awkwardness of adolescence does a pretty good job of returning the audience to those clumsily tender days.

Inspired, in no small part, by Richard Linklater's raucous and nostalgic Dazed and Confused, The Myth of the American Sleepover focuses on a handful of interconnected stories that take place over a single summer night. In this case, it's the last weekend before the start of high school, when an extended circle of teens hop from sleepovers to swimming pools to late-night parties and back again. The boys are clumsy, tender and tentative, verbally stunted by their slow-burning horniness. The girls are fickle and frustrated, seeking the first sparks of romance while trying to achieve social dominance. Appropriately, everything is frustrated by an undercurrent of sexual tension.

Into this dreamy and gawky narrative, Mitchell reveals his teens to be both surprisingly sophisticated and hopelessly naive. Focusing on small, quiet moments, he creates experiences and emotions that are particular to the characters, yet universal in nature, which is probably why it's so hard to pinpoint when his film is set. Though it seems to be the early 1990s, only out-of-date automobiles and push-button phones act as signposts. The details are almost too sketchy, drawing attention to their lack of specificity. Similarly, the film is unnaturally devoid of parents. So despite its timeless feel, The Myth presents a world that threatens to be as unrealistic as any Hollywood studio production.

Some of Mitchell's scenes are poignant and insightful, some are a bit too twee (cue the next Magnetic Fields tune), but as far as first-time efforts go, this Michigan-based indie mostly impresses. The young cast leans on dull affects and stilted interactions but, surprisingly, this adds to the verisimilitude, underlining how emotions, communication, and even desire are a struggle for the teens to articulate. The standout is Claire Sloma, who plays a pixie-ish incoming freshman with her eye on a pair of older boys, and a penchant for self-defeating choices.

Mitchell's pace and compositions can be a bit draggy, and his characters are too alike — the kids are homogenous in looks, personality and social status — but where The Myth of the American Sleepover excels is in its impressionistic approach to a time when hormones rage and identities struggle to take root. Mitchell has an ear for how kids express the minor epiphanies that lead them toward maturity. He understands how the transformative moments in adolescence are understated rather than grandiose. It's a nuance that most teen movies sacrifice in favor of clichéd melodrama, rambunctious posturing or over-the-top comedy. —Jeff Meyers