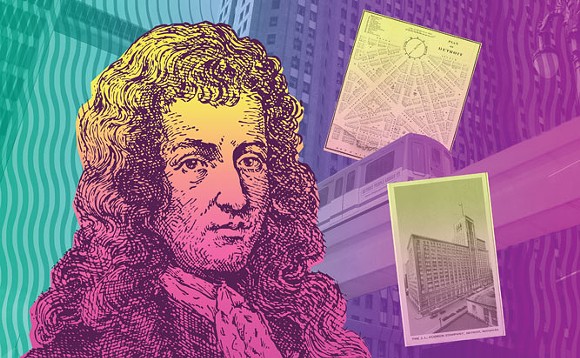 1. What if La Salle had settled Detroit instead of Cadillac?

On the morning of Aug. 10, 1679, the French ship Griffin arrived at the mouth of the Detroit River. That voyage's chief chronicler, Father Louis Hennepin, described a well-situated area of fertile soil and vast meadows, with grapevines, game, and groves of trees bearing fruits and nuts, as well as abundant timber for building. It is, of course, unlikely that the intrepid La Salle would have called off his search for new lands for New France just to put down roots in the future Motown. But had he decided to settle the straits, Detroit would have been founded 22 years earlier, and not by Cadillac, now widely acknowledged as a "wicked" and "scatter-brained" scoundrel. It couldn't have hurt to have had a founder who was a hero instead of a zero.

2. What if the Jay Treaty had never been honored?

At the end of the American Revolutionary War, the British remained in control of several forts in what is now Michigan, including the fort at Detroit. On July 11, 1796, under the terms of the Jay Treaty, Great Britain surrendered these installations to the Americans. But what if the British had sought a tactical advantage and refused to cede Detroit, and held it through the War of 1812 to this day? If that sounds bizarre, consider that it's separated from Windsor, that bastion of "British North America," by less than a half-mile of water, and is even to the north of it. Could the Detroit of today have been a Canadian city, with single-payer health care, provincial public schools, and limited sprawl? Dream on.

3. What if the Woodward Plan had been adopted?

On June 11, 1805, a fire destroyed almost the entire city of Detroit, leaving 300 households homeless. Less than three weeks later, 31-year-old Augustus Brevoort Woodward arrived in town as a judge of Michigan Territory. Woodward put himself in charge of laying out a new city, a system of dividing land into triangles, not rectangles, giving the city a repeating, honeycomb-shaped pattern with broad main thoroughfares and secondary roads lined with trees. But while Woodward was away in Washington, D.C., a trio of Detroit leaders decided to sell land according to the usual plan beginning June 1, 1818. And, in the absence of a plan to guide Detroit's growth in an orderly pattern, the city grew by accretion and exigency, into a haphazard street grid that still frustrates people trying to drive crosstown.

4. What if Michigan had "won" the Toledo War?

In the early 1800s, federal legislation establishing the boundary between Michigan and Ohio had relied on wrongheaded assumptions of where the Great Lakes lay. This resulted in both states claiming a long strip of land encompassing almost 500 square miles, including the city of Toledo. In 1835, both states passed laws seeking to force the other to surrender its jurisdiction over the “Toledo Strip.” This developed into both states raising militias that faced off along the border until the almost completely bloodless “war” was finally settled by the federal government. Michigan lost the Toledo Strip — but received much of what is now its Upper Peninsula as a consolation prize. Had Michigan won the strip, it would now possess Toledo, but would have lost out on the bonanzas of the UP’s copper and iron mines. These days, fighting between the two states is mostly limited to college football.


5. What if “home rule” hadn’t been enshrined in the Michigan Constitution?

The Michigan Constitution of 1908 conferred the power of “home rule” upon Michigan cities. In short, it meant that cities could adopt and amend their own charters, but it also included provisions that made it all but impossible for one city to annex another. As the city of Detroit grew in the 1920s, and as outlying suburban areas were incorporated into municipalities of their own, the city was increasingly deprived of an ability to expand and capture regional revenue to fund the central city. By the end of the 1920s, the city found itself corked off by Dearborn on Michigan Avenue, by East Detroit on Gratiot Avenue, and by Ferndale on Woodward Avenue. Detroit kept acquiring unincorporated township land to grow into the 1950s, but suburban sprawl, highway-building, and urban disinvestment has left metro Detroit politically fractured: a crazy quilt of 160-odd competing municipal governments surrounding a city increasingly deprived of investment, state revenue-sharing, and taxes.

6. What if the Northern Migration never took place?

In the mid-1910s, with World War I raging in Europe, U.S. immigration diminished to a trickle, stretching the labor markets in munition-producing Northern industrial cities to the breaking point. Luckily for armaments makers, this also coincided with one of the greatest mass movements of people in U.S. history: Southern African-Americans moving north to seek freedom and prosperity. They were helped along by a Detroit industrialist named Henry Ford, who sent recruiters down South and formed alliances with black Detroit pastors to help man his factories. The movement continued for more than 50 years, eventually helping establish a black middle class in Detroit, and bequeathing the city such cultural superstars as Joe Louis, Berry Gordy Jr., Aretha Franklin, Diana Ross, John Lee Hooker, Juan Atkins, Derrick May, Kevin Saunderson, Proof, Dilla, and Danny Brown.

7. What if Detroit’s subway had been built?

In 1915, the firm Barclay, Parsons & Klapp published its finding on Detroit’s congested rail transportation system in a report suggesting the construction of a subway. The proposed line would have run up Woodward Avenue, from downtown to what is now Highland Park. Unfortunately, these ambitious plans were put forward at roughly the same time the city was considering buying out the Detroit United Railway, which ran the city’s extensive streetcar system. In 1920, the construction bond for the subway was defeated, and instead the city soon spent about $20 million to ensure municipal ownership of the city’s streetcars. But what if Detroit had built its subway after all? U.S. cities that made the commitment to subway-building almost never decommissioned these underground railways. It’s conceivable that, had it been built, it would have provided a framework for lasting investment, much as subways in other cities around the world do to this day.

8. What if the Big Three not been unionized?

The 1930s were a galvanizing time for workers in the United States, but arguably nowhere more so than southeastern Michigan. With the auto companies tottering along through the Great Depression, and an army of hundreds of thousands of unemployed and underemployed workers tramping the city’s streets, some thought a revolution was at hand. What happened instead was a wave of sit-down strikes beginning in 1936, forcing auto suppliers, parts makers, and finally General Motors to bargain with factory workers. In 1941, the last big automaker, Ford, finally capitulated to labor’s demands for representation. It was a decisive victory for industrial workers all over the United States. And had the industrial giants not been organized, the great postwar bonanza would have seen its profits accrue to the stockholders and owners. Without strong unions negotiating good contracts, it’s highly unlikely those profits would have ever “trickled down” to create the world’s largest middle class ever.

9. What if Detroit had accepted federal funding for a modern mass transit system?

On Oct. 31, 1976, President Gerald R. Ford offered the metropolitan area of Detroit $600 million to fund a rapid transit system. In today’s dollars, that would amount to $2.5 billion. It was touted as “a rallying point for urban revitalization,” intended to help create the framework for more development in the city. It would feature modern light rail vehicles running along the spoke roads emanating from downtown, to be united by an elevated monorail to help riders transfer from one line to another. In the end, local leaders didn’t accept the gift, leaving the city with only a monorail traveling in a 3-mile loop. Keith Schneider, former director of the Michigan Land Use Institute, has called the inability to capitalize on the federal pledge, which eventually expired, “arguably the most damaging decision to the Detroit region in the last 50 years.”

10. What if Hudson’s Department Store hadn’t been demolished?

At 5:47 p.m. Oct. 24, 1998, a push-button demolition destroyed the vacant Hudson’s Department Store at Woodward and Gratiot avenues. Today, the site still lies empty, with only cut-off girders showing the original footprint of the building. But with downtown’s skyscrapers being bought up and redeveloped at an unprecedented pace, it’s fair game to wonder what might have become of the red-brick landmark. As preservationist Francis Grunow once said, “What if Hudson’s were still there? That’s 2.2 million square feet of re-developable infrastructure that was built to last. It wasn’t going anywhere.”