The abortion bans aren’t about abortion — they’re about control 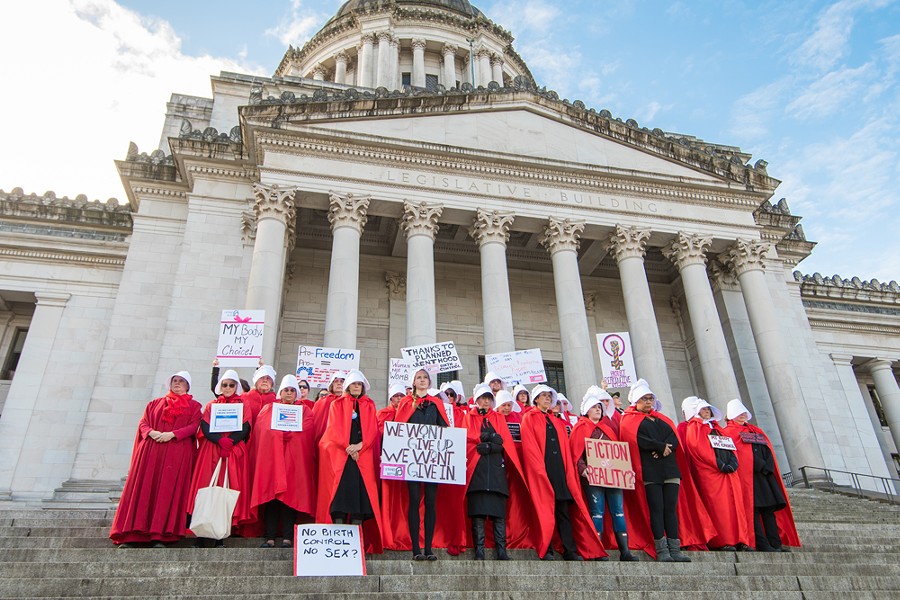 Phil Lowe/Shutterstock.com Welcome to Gilead: These abortion bans are straight out of The Handmaid's Tale.

Last week, on Tuesday, two-dozen scientifically illiterate white men in Alabama who believe they are on a mission from their invisible sky deity declared that a doctor who terminates the pregnancy of a 12-year-old rape victim — a routine, humane, and decidedly uncontroversial medical procedure everywhere else in the developed world — should spend more time in prison than the rapist who impregnates her.

About that sacred gift: Alabama has the worst education system, the second-highest infant mortality rate, and the fifth-highest child poverty rate in the country, with one in four kids living below the poverty line, most of them clustered in majority-black counties. Half of the state's counties have no obstetrician. Nearly 90 percent of its rural hospitals are bleeding red ink. And, of course, the state has refused to expand Medicaid.

Whitmer set to veto Senate’s ban on abortion procedure
By Faith Janet Coleman
News Hits
Like a car that leaves the lot, that sacred gift becomes a lot less valuable the second it slips out of the birth canal.

It's not even about abortion, either. If Alabama really wanted to further reduce the number of abortions — the number of Alabama abortions fell 41 percent from 2005 to 2016, before an uptick in 2017 — it could follow Colorado's lead and make widely available free and low-cost IUDs. After Colorado began doing that in 2009, its teen birth rate declined by 54 percent and its teen abortion rate dropped by 64 percent over the next eight years.

An ounce of prevention, after all, is worth a pound of cure. But again, preventing abortion is not what this is about. It's about control. What this law seeks to codify — and what Alabama lawmakers truly consider sacred — is the right of a small but politically powerful cohort of social conservatives to dictate traditional gender roles and enforce sexual mores according to their interpretation of fundamentalist dogma.

Indeed, in neither Alabama nor anywhere else does such an aggressive attack on reproductive rights have majority support; even Pat Robertson — yes, that Pat Robertson — thinks it's extreme.

Alabama isn't alone, of course. Georgia, Mississippi, Ohio, and now Missouri have all undertaken similar efforts, with bills that ban abortion when a "heartbeat" can be detected, usually around six to eight weeks of gestation, under the theory that having a "heartbeat" imbues a fetus with personhood. Never mind that it's not a heartbeat; at this stage of development, a fetus — the size of a shrimp and lacking a central nervous system — doesn't have a heart. What's being detected is cardiac activity from a tissue called a fetal pole. Then again, it's not like the pro-life crew have ever been sticklers for science.

Related Even with Whitmer's veto, the abortion battle isn't over in Michigan

Even with Whitmer's veto, the abortion battle isn't over in Michigan
By Sonia Khaleel
News Hits
Georgia's ban includes exemptions for victims of rape and incest. The laws in Ohio, Mississippi, and (soon) Missouri — like Alabama — do not.

By design, all of this is unconstitutional, or rather, explicitly designed to force the Supreme Court to reassess abortion's constitutionality. Almost a half-century ago, Roe v. Wade legalized the right to abortion; two decades later, Planned Parenthood v. Casey affirmed that right. The Supreme Court has held that states cannot prevent women from obtaining abortions before a fetus is viable, roughly through the second trimester.

But with two new, uber-conservative Supreme Court justices on the bench — appointed by a president of dubious legitimacy and confirmed by a Senate that represented a clear minority of the American population — anti-choice activists see opportunity: Though neither the science nor the legal arguments have changed since Casey, they believe Donald Trump's right-wing court majority will simply disregard precedent and throw Roe out the window, embracing the textbook definition of judicial activism conservatives claim to loathe.

And you know what? They're probably right. Which makes you wonder: What's next? Gay marriage? Further erosions of civil rights? Authoritarian power grabs? For the right — desperate to impose its will as it slips into a demographic and cultural minority — if the courts are no longer willing to be democracy's backstop against extremism, then everything's on the table.

That worst-case scenario we warned you about in 2016? It's here.

Related Whitmer on abortion fight: 'We’ve got three pro-choice women at the top of state office here in Michigan'

Whitmer on abortion fight: 'We’ve got three pro-choice women at the top of state office here in Michigan'
By Alex Harring
News Hits
Stay on top of Detroit news and views. Sign up for our weekly issue newsletter delivered each Wednesday.