A science-fiction romance that flirts with real thematic depth 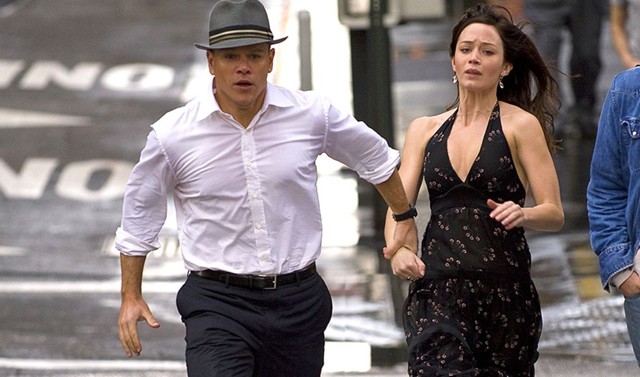 Phillip K. Dick was a lot of things, but few would call him a sentimentalist. That doesn't seem to bother writer and first-time director George Nolfi (The Bourne Ultimatum and Ocean's Twelve) who takes Dick's paranoid examination of predetermination (from his 1954 short story Adjustment Team) and adapts it into a feel good sci-fi romance.

And it almost works, mostly because leads Matt Damon and Emily Blunt are so damn good. The two actors have so much chemistry that you can't help but root for their metaphysically forbidden love. Blunt is charmingly anarchic and Damon is disarming and unpretentious. The combination gives weight and feeling to The Adjustment Bureau, with its unabashed gaps in logic and storytelling.

Damon plays an idealistic New York senatorial candidate who, on the eve of his defeat, meets Blunt's spirited and precocious dancer. He's smitten, but fails to get her name before she runs off. That chance meeting however inspires him to deliver a game-changing concession speech, setting up his next run for office. Months later, when he unexpectedly runs into Blunt a second time, his world derails. It seems that supernatural "adjustors" have been nudging his life along a preordained track, and when one (Anthony Mackie) falls asleep on the job, Damon is given a glimpse at destiny's inner workings. This results in the Adjustment Bureau's acerbic case manager (Mad Men's John Slattery) revealing to him that upstairs management has big plans for him, plans that require that he and Blunt remain apart. Threatened with a mind wipe should he defy or reveal what he knows, Damon struggles to decide which is more important: fate or free will.

"We actually tried free will before," warns Terence Stamp, the Bureau's sinister enforcer. "You gave us the Dark Ages for five centuries." A second chance at human independence resulted in World War I, World War 2, the Holocaust, the Cuban Missile Crisis and global warming. For a brief moment, The Adjustment Bureau flirts with real thematic depth. Dick provides meaty source material for a meditation on the integrity of the human choice. But Nolfi mostly uses the story's theological metaphors and pre-determinist philosophies as a backdrop for a fairly predictable romance.

And, as unconventional as his film sounds, it's part of a well-established sub-genre: the sci-fi/fantasy romance. With as many winners (Wings of Desire, Eternal Sunshine of the Spotless Mind, Heaven Can Wait) as duds (Somewhere in Time, Made in Heaven and The Time Traveler's Wife), The Adjustment Bureau falls somewhere in between, a middlebrow mindtrip that smartly chooses character development over action or fantasy but never quite integrates its big ideas with its commercial instincts.

Nolfi keeps things moving at a good clip, but his direction can charitably be called efficient. Ace cinematographer John Toll covers his shortcomings with some gorgeously shot rainstorms and interiors, but Nofli still stumbles badly in the end. A chase through doors that can supernaturally short cut your trip (provided you're wearing the right hat) never delivers on its build-up, and fails to elicit excitement or suspense. The Adjustment Bureau's ending is similarly vague and dissatisfying.

The movie overstays its welcome by about 10 minutes, but audiences should find this intriguing yet equally silly exercise in hokum an entertaining date-night flick.