The Advice of a Episcopal Bishop Reverend Gene Robinson 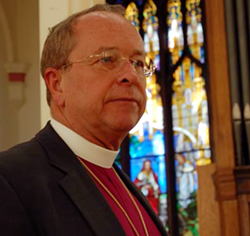 I’m a gay man who has been seeing a devout Christian gay guy for one year. We have a great relationship. We have many of the same interests and respect each other’s feelings and beliefs. However, I am a Catholic who is not that religious, and he is an Orthodox Christian.

Some of his friends oppose gay marriage and think that being gay is immoral, and they are against our relationship. Since I am not a devout Christian, his friends say we should not get married. Other friends say he should not be gay at all and that God does not love him because he is gay. I refuse to hang out with his friends because I think that they are narrow-minded morons. Am I wrong for thinking this?

Sadly, he sometimes thinks that God really does hate him because he’s gay. I try to reassure him that God does not hate him. But he feels this way because of what his “good friends” say. I think he should dump these assholes.

He is often upset by conversations he has with one of his friends in particular, who insists that God does not approve of him being in a gay relationship. The scary thing for me is he actually listens to these people.

Is our relationship going to work? Should he dump these bigots? Please respond to me. I need some answers. Thank you.

We’ve had all sorts of guest experts in the column over the years. Sex researchers, sex workers, medical doctors, sociologists, psychologists, academics, marriage activists, trans activists, and on and on. But this week’s guest expert is a first.

“As a Bishop of the Church, first let me say that I am convinced that God loves DGW’s boyfriend, loves DGW, loves me, loves all of us beyond our wildest imagining,” said the Right Reverend Gene Robinson, Episcopal Bishop (Retired) of New Hampshire, the first openly gay priest to be elected bishop in a major Christian denomination. (Bishop Robinson is also the first member of the historical episcopate — the first in the Apostolic Succession stretching all the way back to Saint Peter — to appear as a guest expert in my column.)

I asked Bishop Robinson to have a look at your question, DGW, because I thought his advice — the advice of a fellow believer — might carry more weight with your boyfriend than the advice of a raving atheistic twatsquat like me.

“This young man faces a couple of problems in his relationship — one that touches on religion and one that touches on what it means to be in a healthy relationship,” said Bishop Robinson. “His boyfriend seems wed to a religion (Orthodoxy) and to friends who espouse the Church’s traditional teaching condemning homosexuality,” he said. “The most alarming thing he said is that his boyfriend is listening to them. Surely this must cause him a great deal of pain.”

But it’s pain your boyfriend no longer has to endure.

“The Church has gotten things wrong before — support for slavery, and using scripture to denigrate and subjugate women — and we are living in a time when the Church is realizing it has also gotten it wrong about LGBT people,” said Bishop Robinson. “Today, there are oases of acceptance and inclusion even in the most oppressive and condemning churches. If DGW’s boyfriend wants to understand how one can read the Scriptures and believe that homosexuality is part of God’s wonderful plan of diversity, he can find such a church, even in a faith that officially condemns LGBT people. Or he can seek out a different expression of his Christian faith in a denomination that loves, values, and rejoices in its LGBT members. But this is work he needs to do for himself. DGW can’t do it for him.”

As for your relationship, DGW, Bishop Robinson agrees that your boyfriend’s inability to break from his emotionally and spiritually abusive friends is a bad sign.

“If DGW’s boyfriend is listening to the condemnation of his Church and his friends, it makes me wonder how much joy he can take in their relationship,” said Bishop Robinson. “How free is he to be the gay man he knows himself to be if that is accompanied by guilt and shame? It sounds to me like DGW’s boyfriend needs to deal with his own internalized homophobia before he can commit to anyone.”

I’m a 22-year-old straight girl with a lovely boyfriend of four years. We started dating during our freshman year of college, and we lost our virginities to each other early in our sophomore year. He’s a great guy, we live well together, and I could easily round him up to “the one.” My problem: I’m bored with our sex life, and I don’t know why.

He’s voiced concerns in the past about how I don’t initiate sex with him often enough. He worries that I am not attracted to him. I am attracted to him. It’s just that I don’t want the hassle of waiting for him to make me come when I can do it faster — and doing it myself means I don’t have to worry about him getting tired or bored. Our sex drives are probably around the same, frequency-wise. I just need to know where to start to make things more interesting.

Having a partner who focuses like a laser beam on our pleasure sounds ideal. But always being the focus of sex, always being expected to come first, always being expected to come — that shit gets exhausting after a while. So order your boyfriend to focus a little more on his own pleasure during sex and a little less on yours. Tell him that, for now, you would like him to be less giving and more taking. And if he worries about being selfish, you can tell him that a study conducted at Kwantlen Polytechnic University in British Columbia found that people with selfish sex partners reported higher levels of sexual satisfaction. (“Emerging Adulthood: An Age of Sexual Experimentation or Sexual Self-Focus?” by Hayley Leveque and Cory Pederson, 2010.)

I suspect, BIB, that once the focus is off you — once you no longer have to live in fear of a forced march to orgasm each and every time you have sex, once you’re no longer under so much pressure — you’ll be able to relax and enjoy sex more. You might even initiate once in a while. Good luck.

Find Dan Savage’s weekly podcast every Tuesday at thestranger.com/savage. Reach him at mail@savagelove.net or @fakedansavage on Twitter.