Or why you need the 49th Ann Arbor Film Festival 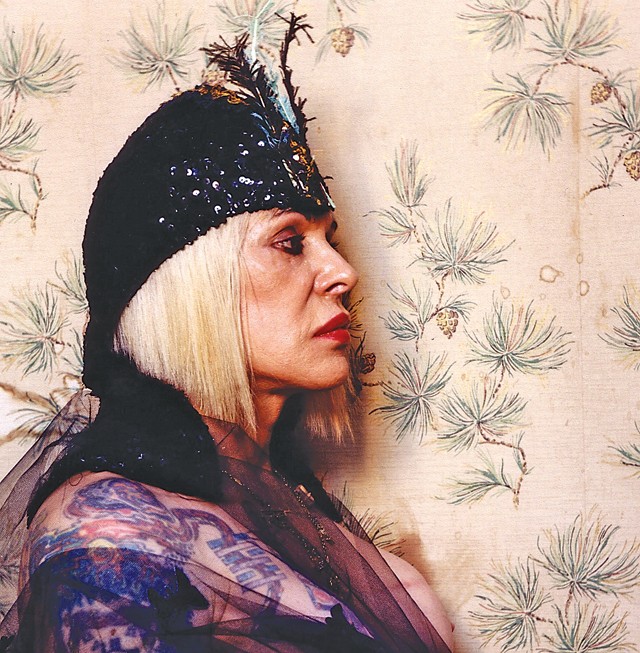 Think of the view of Earth from space. In South America's peninsular tail, there's a brown spot, an earthen blemish on the face of our globe. It is Chile's Atacama Desert, a place where the rain never falls. There, among the abandoned silver and nitrate mining camps, hollow-eyed women search for the remains of their missing husbands and sons, Chileans who were exiled to the desert when the Pinochet regime converted the mines into concentration camps.

But the Atacama is a place for another kind of discovery. As the driest place on Earth, it's the best location from which to view the heavens. Unobstructed by moisture, its night sky is a blanket of infinite stars, a place where astronomers contemplate space, time and the properties of light. On rocky plateaus, generations of state-of-the-art telescopes look into the vastness of our galaxy as scientists search for meaning.

Earthbound, the petroglyphs of ancient societies dot Atacama's chalky landscape. Here, on the leeward side of the Andes, pre-Columbian man made his home in hidden oases and valleys where enthusiastic archeologists seek to better understand the origins of man.

These three groups, each searching for a truth that will help them make sense of the world, are the subject of Patricio Guzm�n's fascinating and heart-breaking Nostalgia for Light. And it's pretty safe to say the documentary won't be popping up at your local multiplex. The truth is, the film is unlikely to ever show in a commercial theater. And yet it is one of the finest films I've seen this year.

Luckily, you can catch it this weekend at the Ann Arbor Film Festival. But if history is any indication, you probably won't. The college town's long-lived (now in its 49th year) celebration of independent and experimental cinema offers no Hollywood sneak peeks or celebrity sightings. Oscar-bait dramas and advance blockbuster previews are not scheduled. Few, if any, of the selections feature name-brand actors.

Instead, AAFF is a celebration of film as expression and experience without commercial consideration. Because of that, most metro Detroiters will miss the fest, opting instead for the latest Seth Rogen or Matthew McConaughey flick.

You see, as moviegoers, Americans tend to be passive and entitled, demanding that $10 buy them two hours of easy entertainment. And Hollywood has been pretty good at giving us what we want — profane comedies, eye-popping action flicks, weepy dramas and heart-tugging romances. It's a pizza and ice cream approach to cinema.

For those who believe that their palates are more refined, art-house theaters broaden the buffet with historical dramas, ironic indies and foreign imports. But let's be honest, less than a quarter of what plays at the art house is artistically challenging. The difference between The King's Speech and The Karate Kid is accents, costumes and sets. Otherwise, they're essentially the same story.

None of this is new. Hollywood has long offered up a menu of "different but familiar" movie options. As technology expands our options for entertainment, what we choose to consume only seems to grow more and more similar. In response, sequels, adaptations and brand synergies work hard to reinforce our undemanding expectations. This year we'll be treated to 27 movie sequels and nearly a dozen comic book adaptations. Films based on board games such as Battleship, Hot Wheels, Candy Land and even Hungry, Hungry Hippos are in development.

Film criticism, ever fearful that it might come off as too elitist, has becomes a Consumer Reports-style assessment of cinema products while media outlets dutifully report on box office numbers as the ultimate gauge of entertainment consensus.

Though it's far from fair, I blame Roger Ebert. Though his criticism shows a deep sense of humanism and intelligence, his popularization of the "thumbs up-thumbs down" moviegoing mantra has helped undermine an appreciation for what the breadth of cinema has to offer. With all experiences reduced to 1 (like) or 0 (dislike), film has become less about discovery and more about validation. We've become convinced that movies must, above all, deliver pleasure and a sense of cathartic fulfillment.

It's such a limited way of engaging with art. Yes, Cinderella stories of personal triumph can be inspirational. Yes, sometimes you just want to see shit blow up. But why can't film be more than getting your emotional buttons pounded on? There's a banquet — a cinefeast, if you will — of options out there waiting to be tasted. Instead of checking your brain at the door, why not your expectations? Sure, the narratives might be disjointed or the pacing slower than the machine gun editing of studio releases, but the rewards can be just as satisfying.

And before you dismiss this piece as an elitist screed against popular culture, understand that I love pizza and ice cream as much as the next guy. There's nothing wrong with geeking out over the latest Iron Man or Harry Potter movie. But great meals, the ones we never forget, have tastes and textures we never expected. Why limit yourself to Burger King and Red Lobster, where menus are test-marketed and committee-approved, and never vary? Isn't the richness of life enhanced by a sense of discovery, a willingness to be challenged?

The Ann Arbor Film Festival offers that opportunity. It is the only festival of its kind in the United States, showcasing movies that will play in few other places. Not everything will be good. In fact, some of the festival's programming will be akin to eating lima beans ... or whatever cuisine made you gag as a child. But, really, the recently released Red Riding Hood was no better. Who was it that said the greatest rewards in life come with risk? I don't know, but as far as risks go, catching a movie without Brad Pitt or Sandra Bullock is a pretty low-stakes one.

The key is a willingness to surrender to the experience. If you engage a film on its terms, not as a reflection of your expectations, chances are you'll find something memorably worthwhile.

And you don't have to go in blind. Some festival offerings, as unfamiliar and unconventional as they may be, are pretty safe bets. Along with Nostalgia for Light, AAFF's animation program is usually a good mix of crowd-pleasers and mind-benders. Similarly, Amplitude & Scale: Music Videos, is like the ultimate episode of MTV's 120 Minutes. Watch for a brilliant mash-up of Broken Bells and Hall & Oates.

Verena Paravel and J.P. Sniadecki's Foreign Parts is an arresting and insightful glimpse into a Third World culture subsisting in the middle of New York City. In the shadow of the new baseball stadium in Queens is a hidden, vibrant enclave of junkyards, where a community of immigrants lives off the Big Apple's refuse and recycling while fending off the schemes of voracious developers.

If you have a hankering for a little meta-fiction, Canuck filmmaker Daniel Cockburn's You Are Here is a collection of episodic shorts that make Charlie Kaufman look mainstream. Constructed like a cinematic puzzle box, this low-budget labyrinth of seemingly disconnected narratives isn't for everyone, but offers the intellectually daring an experience they just won't find on HBO or Showtime.

For industrial-glam-rock fans, The Ballad of Genesis and Lady Jaye, is an uncritical love letter to Psychic TV and Throbbing Gristle leader Genesis P-Orridge, whose crazed and kinky relationship with nurse-turned-dominatrix Lady Jaye led the two lovers to try to merge as one "pandrogynous being."

And finally, pushing the boundaries of what is considered cinema, the Netherlands-based trio, Telcosystems, offers up a live multimedia performance that uses lights, images and sound design to immerse the audience in their own cinematic experience.

Ultimately, AAFF is both an experience and a scene; "40 programs over six days with 188 films, videos and live performances." Whether it's the after-hours parties or crazed installations or interactive displays, the festival does a damn good job of transforming a corner of downtown Ann Arbor into a celebration of independent cinematic expression. Good or bad, at the very least, it'll be a hell of a lot more interesting than most of the stuff you'll find at the multiplex.

Go online to see video clips of films and performers from the AAFF in the Metro Times' B-Roll film blog.