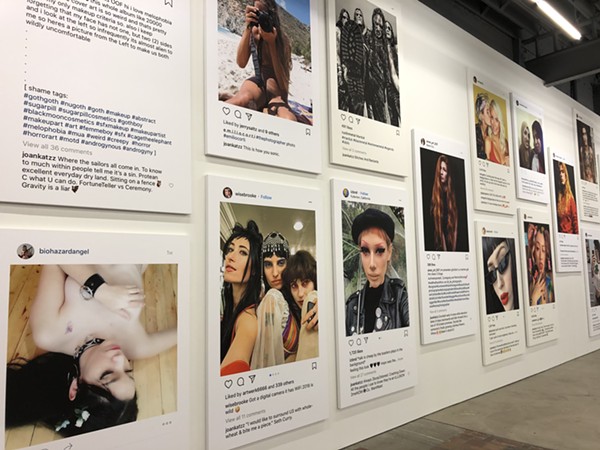 A little more than a century ago, Marcel Duchamp famously pushed the limits of what could be considered art when he took a urinal, rotated it 90 degrees, signed it with the pseudonym “R. Mutt,” and submitted it to the Society of Independent Artists’ inaugural exhibition in New York.

At the time, the work ignited a debate within the Society, with the show’s committee writing that the work “is by no definition, a work of art.” The New York Dadaists later defended the work in an editorial. “Whether Mr Mutt with his own hands made the fountain or not has no importance,” they wrote. “He CHOSE it. He took an ordinary article of life, placed it so that its useful significance disappeared under the new title and point of view — created a new thought for that object.” In the end, Duchamp won; today, “Fountain” is regarded by art historians as a major landmark in 20th-century art.

The contemporary artist Richard Prince puts a 21st-century spin on the concept in his latest exhibit, which is now hanging at the Museum of Contemporary Art Detroit — and like Duchamp, he has also sparked a controversy. For the show, Prince took screenshots of other people’s Instagram posts, adding his own nonsensical comments in the post’s replies. He then enlarged the screenshots, printing them on canvases, some more than five feet tall. The show, which is hung at MOCAD salon-style, went up last month.

Like scrolling through Instagram’s infinite algorithmically driven feed, the experience of walking through the show, a phantasmagoria of seemingly unconnected images, is certainly disorienting. It features a mix of images pulled from both relative unknowns and celebrities like Miley Cyrus, drag queen Violet Chachki, and transgender YouTube star Gigi Gorgeous, as well as brands like Afropunk. Many of the selfies and photos have a strong feminist streak, with the women subverting the male gaze by presenting themselves as sexualized yet confrontational, and accompanied with self-affirming captions.

Prince gives himself the last word, however, with his gibberish replies, written in what he calls “Birdtalk.” The comments are written from a number of different accounts — because Prince allegedly keeps getting banned from Instagram for breaking posting rules — like richardprince1234 and joankatz, which is the name of a longtime friend. All are written in the same nonsensical style, and are the last thing the viewer sees when reading the image from top to bottom. (An example: “Translation: which is more essential? Beauty or truth? There's no solution in words. Fidelity or freedom? The anxieties of one’s own past and its connection to the parallel impact of an invading army. Are there figures in your family you feel driven to emulate? And if not, why? Is it to much to ask for a modest oil portrait?” And that’s one of the more coherent ones.) The exhibition replicates the uncanny valley experience of using the internet in 2019, where you can’t tell if you’re engaging with real people or Russian bots or just garden variety trolls.

Is it art? Of course it is. Is it good art? That’s always been up to the beholder.

But Zöe Ligon, a sex educator who runs the Detroit-based sex-toy store Spectrum Boutique, put the show on blast last week, objecting to the use of a selfie pulled from her Instagram account. 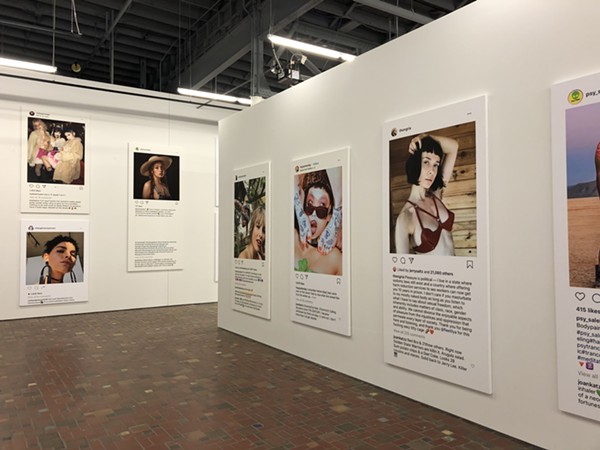 On Friday, Ligon posted a photo on her Instagram of workers installing a canvas featuring her image at MOCAD.

“I didn’t consent to my face hanging in this art gallery,” she writes, in part. “What Richard is doing is questionably legal, but even if something is legal and ‘starts a dialogue’ it doesn’t mean you should actually do it. Not all legal things are ethical. This, in my opinion, is a reckless, embarrassing, and uninformed critique of social media and public domain. This is appropriation artwork. This isn’t progressive, this isn’t even subversive. Maybe it was when he began doing this in 1977, but in 2019 it’s tone deaf.”

Ligon also said the use of her image without her consent made her feel exploited.

“I am a survivor of childhood sexual abuse,” she writes. “Part of the reason I take ‘sexy selfies’ is because I am reclaiming my own sexualized image. To see my image on the walls of MOCAD feels as though a picture I’ve taken of myself to reclaim my sexual body is being used to violate me all over again. Given that millions of people are sexually assaulted each year, I imagine I’m not the only one who feels this work is a violation of boundaries on a much deeper level.” As of Monday, Ligon’s post has garnered more than 36,000 likes.

Imagine my surprise when I saw Richard Prince tweet a 6ft inkjet printed picture of a screenshot of an Instagram post of mine hanging up in my hometown of Detroit at MOCAD. I didn’t consent to my face hanging in this art gallery. What Richard is doing is questionably legal, but even if something is legal and “starts a dialogue” it doesn’t mean you should actually do it. Not all legal things are ethical. This, in my opinion, is a reckless, embarrassing, and uninformed critique of social media and public domain. This is appropriation artwork. This isn’t progressive, this isn’t even subversive. Maybe it was when he began doing this in 1977, but in 2019 it’s tone deaf. I am a survivor of childhood sexual abuse. Part of the reason I take "sexy selfies" is because I am reclaiming my own sexualized image. To see my image on the walls of MOCAD feels as though a picture I've taken of myself to reclaim my sexual body is being used to violate me all over again. Given that millions of people are sexually assaulted each year, I imagine I'm not the only one who feels this work is a violation of boundaries on a much deeper level.

“Like many contemporary cultural institutions, MOCAD has always been a space for the playing out of disparate and conflicting ideas. We state in our mission that we fuel critical dialogue, we are proud of the critical and important work we are doing to present progressive and challenging artists and exhibitions for vast audiences. The works in the exhibition are not for sale, and are designed to prompt discussions about context, ownership, and originality—questions first asked in an institutional setting over 100 years ago by Marcel Duchamp, and more pressing than ever in our world of social media and big data. We invite audience/visitors to our free public programs to engage in the dialogue. MOCAD presents over 17 exhibitions and over 250 free public programs a year.

A talk by Brian Wallis on the work of Richard Prince will be held on Nov. 7 with a community dinner to follow, furthering the discussion. RSVP would be greatly appreciated.

The point of the exhibition is to speak about these issues of ownership and ask these questions. This is a very relevant discussion. Is social media empowering people or co-opting artistic production? Where do our expectations and perceptions around privacy and consent lead us when using social media? What are you consenting to when posting? Is all photography exploitive?

MOCAD respects the opinions of the community that it serves and artists that are exhibited and stands by their right to express themselves freely. With regard to the subject of the portrait, as soon as I learned of her concern I reached out and invited her to come and speak and share concerns. We met before the show opened to the public at the Museum. We asked if she wanted us to remove the work from the exhibition and at the time, she said that she did not want it taken down unless we removed all the works in the exhibition. MOCAD has no plans to censor the entire exhibition.

Anyone who undertakes a Richard Prince show understands that some visitors may have difficulty with the work. We invite their perspectives and further discussions about Richard’s artwork.”


MOCAD was likely not blindsided by the controversy. ArtNews reports that when Prince showed the work in New York in 2014, he was hit with at least five lawsuits from people who objected to the use of their images in the show. In 2015, Missy Suicide, the founder of the Suicide Girls pin-up collective, sold her own versions of images appropriated by Prince for $90 each, vastly undercutting Prince’s reported gallery price of $90,000.

In the show’s artist statement, Prince seems to know how his work might be received.

Related MOCAD is gearing up for its fall arts season with a twisted, whimsical holiday display

MOCAD is gearing up for its fall arts season with a twisted, whimsical holiday display
By Lee DeVito
Fall Arts Guide
Stay on top of Detroit news and views. Sign up for our weekly issue newsletter delivered each Wednesday.