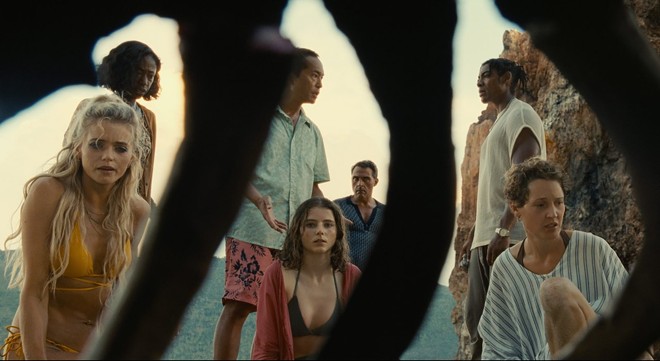 M. Night Shyamalan's latest hits us at the peak of our not-vaccinated-enough summer, at a time where every theatrical release can feel like an event more than usual. Blending tones from a million kinds of summer fare — family stories, vacation films, slashers, Big Brother and Real World-style reality shows — all with a knowingly trashy (but still fresh) premise, Old embraces them a bit miraculously: by double-fisting batty, moment-to-moment immediacy with a broad philosophical and existential awareness.

Though never shy about its origins in a schlocky, high-concept premise (adapted from Sandcastle, a European graphic novel), it's Old's eagerness to wring the most from it that ultimately frees it — specifically, to turn on a dime between laughs, thrills, and quiet contemplation. In Shyamalan's hands, an elevator pitch here becomes a rich excuse, permitting him to throw a cast of characters, mostly strangers, together on a secluded, rocky cove (onscreen, he plays their bus driver, who drops them off there). Once abandoned, they're trapped there by naked plot contrivances (the movie has, but rarely suffers too much from, more than a few). There, they find themselves aging in about a year per half-hour of narrative time, forced to face a rapid-fire barrage of complications as best they can — confronting viewers all the while with both the frothy spectacle and deeper notions brought on by witnessing this compressed stretch of life and time.

The cast here is far from incidental, for Old offers up a small parade of decent-to-splendid character and leading actors, headed by an onscreen nuclear family of practiced performers. As a married couple attempting a final tropical vacation before an expected split, Gael García Bernal's Guy and Vicky Krieps's Prisca (an actuary and museum curator, respectively) lend heft, credibility, and their genuine accents to Shyamalan's often blunt-edged dialogue, navigating the reality of their situation with a mix of caution, fear, and grace. They're joined by their young children Maddox (Alexa Swinton, then Thomasin McKenzie once a teenager) and Trent (Nolan River, later Alex Wolff when grown). As these notes imply, this core cast remains on the beach a while, working alongside a many-tempered crew of strangers first to understand their predicament and then to solve it. Together, this group of a dozen forms what Shyamalan treats as a little society (a village?) with families, both promised and present, as its hoped-for summit, as in prior work.

From here, as in reality shows, fault-lines erupt and characters — inevitably — lash out at one another. With tensions and scuffles countervailed by attempts at cooperation, pooling of skills and expertise, emotional support, and frantic intimacy, Old foments a kind of nuclear bouquet of swerving emotions and fast-changing plot realities, resting upon what often feels like a teetering, just-balanced tonal scale. While this frenetic blend of humor and peril may sound in some ways traditional — say, for a '90s slasher or vacation thriller — and perhaps a bit chaotic, Old renews and grounds itself not just through technique but point of view. Attempts at maverick heroism are, as in slashers, often undermined, and those who struggle too mightily or hastily against this new form of aging and time (imposed in some sense, even onscreen, by Shyamalan himself) find themselves tilting at windmills.

While the movie doesn't totally lack in moral judgment of those characters who err or fall (racism, naturally, proves a punishable offense), it's uncommonly committed to understanding its tourists with a sympathetic rather than sadistic gaze. Whether it's the model-blonde, younger wife (Abbey Lee) of a tempestuous British doctor (Rufus Sewell) who's too conscious of her looks or a suddenly-teenager (not naming which) acting out from panic, Shyamalan clarifies — briefly, for there isn't much time — that his characters act in ways informed by personal histories, both physical and emotional — or by externals like circumstance and social pressure. What proceeds from this is a kind of humane air, at least for what we're watching, an atmosphere of some care and attention for the featured players, each of whom face up against Old's premise as a kind of tragedy meant to scan as more personal than graphic.

Though Shyamalan and his director of photography Mike Gioulakis (It Follows, Split, and Glass) make many striking images here, the best tend not to come from the obvious places. Faced with ample opportunity, Shyamalan proves over and over: while not averse to depicting medical violence — or even some medically centered body horror — he is not a gorehound. As made plain in one scene with the potential for a dramatic, even cartoonish moment of Midsommar-style impact, Shyamalan cuts away just prior. Moving from a pointedly elided climax in violence to a shot of a towering — then crashing — wave, he finds here a natural and poetic way to personally flinch — while capturing a comparable visual impact and suggesting less lurid emotional tones than he might have.

Just as much of image-making onscreen stems from casting — whether you're working with actors or models — much of what Shyamalan's most interested in here is a kind of emotional depiction stemming from actors' physicality. Framing them often in shots that recall the split diopters of Hitchcock and De Palma, his work here is less self-reflexive than either of theirs — invested instead in a kind of portraiture through fragments. Avoiding traditional angles in favor of compositions that place some portion of an actor's face — sometimes just a nose and eye — against a background of stark cliffs or idling beachgoers, what Shyamalan's doing here feels strikingly close and intimate, not any more attentive to action than to the emotions it reveals in his characters. This is perhaps truest of fictional rapper Mid-Sized Sedan (Aaron Pierre), whose largely silent performance on the beach suggests currents of grief through little but framing, facial acting, and posture well before they erupt in the open. Whether addressing movement, feeling, or the two intertwined, Shyamalan and Gioulakis possess the rare and welcome confidence to hold a shot and trust it, working well-tested alchemies of framing and performance just so they become revealing. Within this space, though, their work often feels derived from novel recipes, and disarms by shooting with an at times touching, fairly unsentimental attention that belies the crass potential — and sometimes substance — of the material. Within Old's world, certain realities can be addressed but never denied — and the weight of these does much to counter any potential for outright sap.

This sense of intimacy — stemming less from writing than from framing and performance — is what moves the movie's intermediary emotional gestures from the stuff of soap opera to awfully quiet melodrama. But as with any intimacy, Old presents its viewers with an opportunity that has to be taken up mutually. Viewers may recoil at this, its odd wrinkles and needless coda, or take the movie only for its thrills — but in doing so, they'll deny it, and themselves, its capacity to move.

This summer, visionary filmmaker M. Night Shyamalan unveils a chilling, mysterious new thriller about a family on a tropical holiday who discover that the secluded beach where they are relaxing for a few hours is somehow causing them to age rapidly … reducing their entire lives into a single day.

Old is a Blinding Edge Pictures production, directed and produced by M. Night Shyamalan, from his screenplay based on the graphic novel Sandcastle by Pierre Oscar Lévy and Frederik Peeters. The film is also produced by Ashwin Rajan (Glass, AppleTV+’s Servant) and Marc Bienstock (Glass, Split). The film’s executive producer is Steven Schneider.