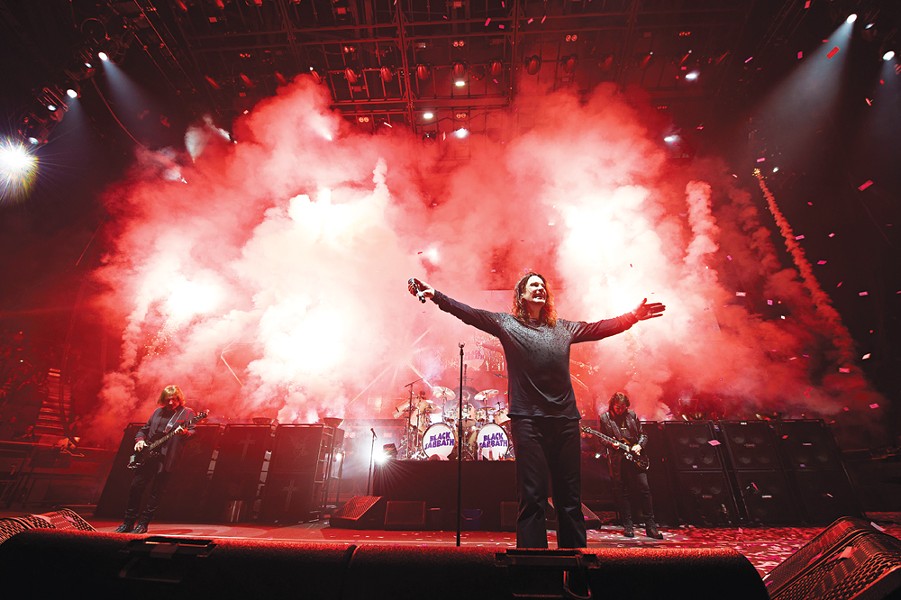 On Feb. 13, 1970, a record called Black Sabbath was released. The album comes on like a distant storm, then soon is upon you. Today, the album is praised as the stone slab from which all heavy metal rises. Hear Tony Iommi's deceptively simple riffs, singular and derived from the strange beauty of his deformed fingertips — a slab of blues on which to sacrifice your soul. Geezer Butler, bassist and lyricist, is both the angel and devil on your shoulders. His bass rumbles, the echo of your conscious, an unsatisfied void. Out of it, Bill Ward doesn't play in time, but by "massive empathy," more primal than systematic. Ozzy Osbourne, our unwilling, though glee-stricken, protagonist wails, "What is this that stands before me?/ Figure in black which points at me/ Turn around quick and start to run/ Find out I'm the chosen one? Oh nooooooooo." The storm, the music — the music, the storm.

Nearly five decades later, the bell still marks the hours, though late, for Black Sabbath. And with their final tour, "The End," figures the original lineup, minus Ward. Due to Ward's departure and animosity toward Osbourne, Tommy Clufetos (a Rochester native) is on drums. There's no substitute for Osbourne, who remains in his seminal position, casting long shadows over Ronnie James Dio, Ian Gillan, Tony Martin, and a legacy of heavy metal wails.

Black Sabbath conjured the heavy metal movement and their second album, Paranoid, is the "classic defining moment," says Rob Halford, singer of Judas Priest, in Ian Christe's Sound of the Beast: The Complete Headbanging History of Heavy Metal. "It's all there," Halford says, "the riffs, the vocal performance of Ozzy, the song titles, what the lyrics are about." Death metal, doom metal, industrial metal, speed metal, thrash metal, and hell, even pirate metal, are all supported by the pillars of Iommi, Butler, Osbourne, and Ward.

Black Sabbath has undoubtedly influenced masses of Detroit musicians from all genres, metal to soul and from Americana to punk. A local Sabbath savant and Detroit Blueflowers guitarist David Johnson shares his memories of attending his cardinal Sabbath performance. "My first Sabbath live experience was on Veteran's Day 1983 at Cobo Arena," he says. "It was the 'Born Again' tour with Ian Gillan singing for the band. Sabbath had a Stonehenge-themed stage show, a full year before This Is Spinal Tap came out. Iommi's ominous guitar bend filled the massive venue. It certainly left an impression on 14-year-old me."

Of the original lineup, Johnson says, "It wasn't until 1999 that an actual bona fide reunion tour hit the Detroit area. I finally got to see Ozzy, Tony, Geezer, and Bill onstage together. The mere sight of the four of them appearing to have a good time and playing the catalog of my youth left me absolutely gobsmacked. Although I've seen the Osbourne-fronted lineup a bunch of times since '99, nothing will top that first reunion show [and] all those classic songs. It was simply a magical night."

In 1992, Troy Gregory, from Detroit-based bands the Witches and the Dirtbombs, experienced tours with both Osbourne and Black Sabbath from the stage, rather than from the audience, when he toured on bass with the New York-based trash metal act Prong for several months. About Ozzy, Gregory recalls, "When we eventually played two nights in Detroit at the Fox Theatre, I went to my parents' house and decided to grab my copy of Paranoid to have Ozzy sign it. The next day, I brought it into his dressing room where he was laying on a couch. He autographed the inner sleeve, and it reads: 'To Troy, One of the best guys I know.' He then eyeballed the worn record and asked, 'How long have you had this?' When I told him that I bought it when I was about the age of 10, he laughed and groaned, 'God, I'm old!'"

With Prong, Gregory also toured with Black Sabbath. When he met Iommi, Gregory says, "I gushed over how much of an influence Black Sabbath was to me and over which Sabbath songs I love. A wide smile appeared on Tony's face and he handed me and Tommy Victor, from Prong, guitar picks. We left his dressing room still holding the picks, giggling like kids. Last time I saw that pick was at a gig at the Gold Dollar, when it flew out of my hands and disappeared into the sticky void."

Iommi's guitar also influenced the guitar-style of the punk band Sros Lords' guitarist and singer, Morgan Blank. "Black Sabbath is one of the most important influences on the music I play today," he says. "I was a Headbanger's Ball, heavy metal kid in the '90s, and Sabbath was considered the progenitor of all the music I grew up with. When I started playing the guitar, I found my fingers dragging rather clumsily if I attempted to play traditional, punk-style power chords. One day in Mills Pharmacy, I was leafing through a Guitar Player magazine, checking out all the stuff I couldn't buy, and in the tab section they had 'War Pigs.' It is played with two-note power chords instead. I totally ripped that off, and still play that way today in all our heaviest songs."

Black Sabbath was a mystifying presence in the childhood of Jim Diamond, the notable Detroit bassist (Dirtbombs) and recording producer/engineer. Diamond laughingly remembers, "I heard 'Iron Man' when I was maybe 7 years old, and at the same time I was watching all those Marvel cartoons on Channel 20, like The Hulk and Captain America. I kept wondering what the connection was." Diamond saw two Sabbath lineups play, "one with Ozzy and the other with Dio, different but both great concerts," he says. "You can't beat Tony, Geezer, and Bill for a band. Wow!"

Matt Thibodeau, the bassist in legendary soul singer Melvin Davis' band, also has a childhood memory of Sabbath: "The first song I ever learned to play was 'Iron Man' using my thumb and a toy guitar," he says. "I was a nerdy kid, and I cut out pictures of Ozzy from metal magazines and covered my bedroom walls with them."

Now, as we reach the finis of Black Sabbath, it is reductive to claim the band simply invented heavy metal. Sabbath also ignited musicians, luring them from innocence to experience and showing young rockers that they too could be a sonic storm. "Oh noooooooooooo ..."