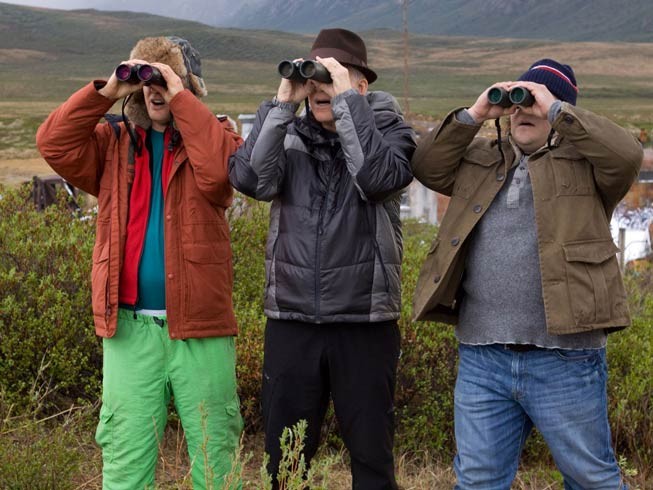 Just who was this movie made for? I know the Audubon Society boasts a healthy membership, but is it really big enough to justify the salaries of Steve Martin, Jack Black and Owen Wilson? Did the producers negotiate a package deal? All three are past their comedic prime, lately turning in performances with ever-diminishing laughs (The Pink Panther, Gulliver’s Travels, Drillbit Taylor respectively), but here they shed their shtick for inexplicable blandness. Some might argue that they’re playing decently formed characters for a change, but there’s no getting around that they’re not very interesting characters.

The Big Year is the kind of innocent, forgettably genial movie that your Sunday school teacher might have enjoyed. The subject matter is inoffensive, the leads are decent, likable folks, and you’d be hard-pressed to find a naughty word or controversial idea anywhere in sight. Of course, the movie also lacks wit, depth or energy.

Too easygoing to find its own comedic or dramatic potential, happy to amble along at an expectation-free pace, director David Frankel (The Devil Wears Prada, Marley and Me) has paired his A-list leads with a talented supporting cast — Angelica Huston, Dianne Weist, Rashida Jones, Tim Blake Nelson, JoBeth Williams, Joel McHale, and Kevin Pollak — and delivered a whole lot of meh.

The gist is this: Black is a divorced, living-with-his-parents computer programmer who obsesses about birds and hopes to raise enough funds to compete in the Big Year. Martin is the powerful CEO of an anonymous corporation (They do deals! In offices!) and fears that he’ll never get to live his dream of winning the Big Year. What is the Big Year? It’s an annual bird-watching contest where participants attempt to observe as many species in the United States as possible. The current record holder is Wilson, a wily competitor who will do anything to keep his title — even neglect his beautiful new wife (Rosamund Pike). The three men, each struggling to define his life, crisscross the country in pursuit of victory. Needless to say, with nary a big laugh to be found (and believe me, I looked), the movie is a tough sell. Which explains why its movie trailer is so profoundly unrevealing. Avoiding all references to birds or birding, 20th Century Fox’s marketing department has decided to zero in on a couple of Jack Black pratfalls and the name recognition of its stars to make bank. What they don’t tell you is that the film has spent more than a dozen years in development. Maybe it should have stayed there.

Screenwriter Howard Franklin (Quick Change) tries to construct the movie like a sports comedy, trading home runs for rare hummingbirds and snowy owls, but never using the competition as a way of revealing his characters. Black, Wilson and Martin schlep from one coast to the other, and even out to the furthest reaches of Alaska, in a series of redundant and not particularly funny episodes that accent what we already know about them.

Though he has a gentle and laconic style, director Frankel isn’t very adept with comedy, botching the few good bits the script offers (an attack by birds on a fish-soiled scarf, for instance). He lacks visual panache as well. You’d think that a film shot in so many gorgeously grand settings would provide for an inspiring travelogue. No such luck. Frankel’s camera seems incapable of wonder, moving through its exotic landscapes like an impatient tour group.

If The Big Year does anything, it highlights how far Martin, Black, and Wilson have fallen from the giddy, off-kilter humor they used to bring to projects. Safe, comfortable, and branded within an inch of their lives, they’ve become multiplex mainstays, selling movies that are as exciting as the faux butter that covers your overpriced popcorn