The Bloom and the Bern: two theories of how to beat Donald Trump 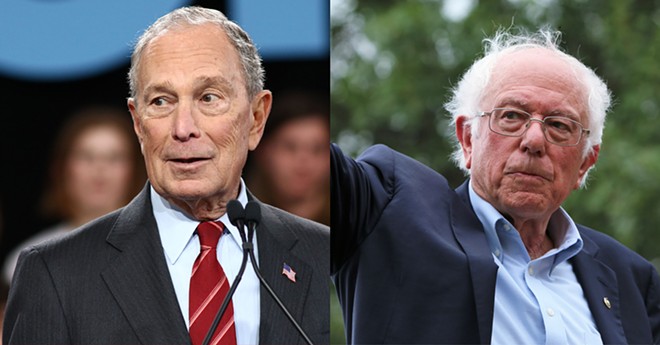 There are many, many things wrong with Michael Bloomberg's billion-dollar vanity exercise. But there is one thing he gets right, and it's also the thing that gives me pause about Bernie Sanders's increasingly likely nomination.

But I also think Donald Trump poses a singular threat to our institutions, and that if he wins, we'll spend four more years sliding toward authoritarianism. Priority one is defeating him.

Bloomberg's campaign isn't premised on ideas. The whole thing — the hundreds of millions of dollars he's spent, the billions more he says he'll spend — can be summed up in one sentence: Trump is bad, and I can beat him.

Let's make one thing emphatically clear: Mike Bloomberg is the absolute wrong person to deliver this message. Bloomberg's history of racist, sexist, transphobic comments is disqualifying. Stop-and-frisk is disqualifying. Trying to literally buy an election is disqualifying. Having the plutocratic hubris to first suggest that other candidates drop out so he could go mano-a-mano with Sanders, then showing up in Nevada after half-assing debate prep is disqualifying. (Watching Elizabeth Warren disembowel him was fun.)

Bloomberg is a terrible candidate. Democrats would be nuts to nominate him. But that doesn't mean we should ignore the one thing he accurately intuits: If the election is a referendum on Trump, Trump will lose.

Unseating an incumbent is hard under the best circumstances; only once in the last hundred years has a party lost the White House after one term in power — in 1980, during a recession and the Iran hostage crisis. It's even more difficult when the economy is growing. Any normal president would be favored this year, when GDP is growing at about 2 percent, we're adding about 200,000 jobs a month, and unemployment is under 4 percent.

But Trump isn't a normal president. He's never had positive approval ratings; he probably never will. Democrats scored massive wins in 2018 because voters disliked him. Hillary Clinton was on track to wipe Trump out when the campaign was focused on him — until James Comey refocused it on her email scandal just before the election. Democrats are ahead in generic polls, and most major Dem candidates consistently poll several points ahead of the president.

Bloomberg's theory, then, is to simply let Trump beat himself. For all of his braggadocio, Trump understands this. He doesn't want a referendum. He wants an enemy — someone to make as despised as he is.

Any Democrat will be attacked, called a commie, a baby killer, the Antichrist, perhaps have Trump's totally independent Department of Justice launch an investigation into some family member. But Sanders is leading a self-described political revolution. He also has a long history of praising aspects of repressive regimes, including the Soviets and the Sandinistas. (Just this weekend, on 60 Minutes, he threw in some nice words for Fidel Castro's literacy program.)

That's what Trump wants. Maybe it's what Bernie wants, too — sweeping reforms shouldn't be secondary players in an election. It is not what Democratic Party leaders — or Dems in vulnerable congressional districts — want.

I do worry that Sanders is the wrong person running the right campaign at the wrong moment. tweet this

I normally don't find establishment pearl-clutching particularly interesting. For decades, the party has been terrified of its own shadow, even as radicalizing Republicans redefined the political center.

But I do worry that Sanders is the wrong person running the right campaign at the wrong moment.

The thing about revolutions — or major legislation — is that they usually follow disasters. The 13th, 14th, and 15th Amendments followed the Civil War. The New Deal came amid the Great Depression. The Civil Rights Act followed JFK's assassination. Even the Affordable Care Act followed a global economic collapse. The economy isn't nearly as great as Trump claims, and perhaps it will crash in the next eight months; but right now, we're not there.

That's not to say Sanders is unelectable, or that Democrats vying for the so-called moderate lane would be more electable. Sanders can inspire and mobilize in a way that Joe Biden and Mike Bloomberg never will.

But I would argue that a campaign focused more on prosecuting Trump's malice, incompetence, and corruption than selling a massive overhaul of the U.S. economy — while explaining the differences between communism, socialism, and democratic socialism — is more apt to succeed.

Peter Hamby made a compelling argument in Vanity Fair last month that my concerns are misplaced: "What if Sanders is actually the MOST electable Democrat? In the age of Trump, hyper-partisanship, institutional distrust, and social media, Sanders could be examined as a candidate almost custom-built to go head-to-head with Trump this year."

Sanders, Hamby continued, has five things going for him: celebrity, media-savvy, a clear message, a fundraising machine, and an army behind him. The last thing is the most essential.

Bernie's theory is that he's going to rewrite the playbook, that his movement will inspire young and previously disenfranchised voters to turn out in record numbers, while his economic populism will peel away segments of the Trump coalition.

In a close election, which forecasts suggest this will be, a surge of new, unlikely voters could put Sanders over the top — if they're in the right states, and if they're not offset by otherwise-Trump-wary suburbanites scared off by the S-word.

This is the high-stakes gamble Bernie is making. It's a bet Trump appears eager to take.

Then again, Hillary Clinton was eager to run against Donald Trump.